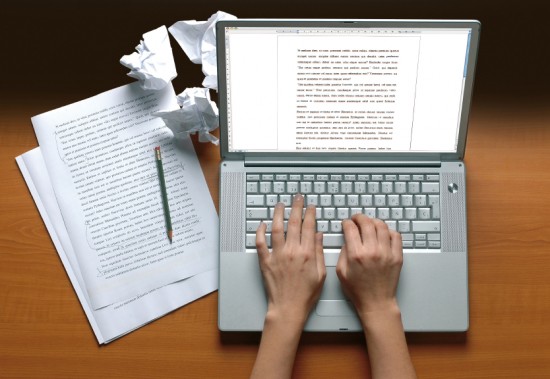 As you read this, another aspiring writer is attempting to craft something that they hope someone else will pay them to publish. Hundreds of aspiring writers, if not thousands, are working on blog, Tumblr, or Facebook posts or, well, dozens and dozens of different kinds of writing. There’s a lot of room out there for growth as a writer—even one as niche as being a geeky writer—but the waters are hazardous and the heading uncertain.

It doesn’t help that there isn’t one unifying career path that will lead folks to being a writer of geeky caliber. Ask five writers how they managed to get where they are today and you’re liable to find five varying degrees of training with possibly more than five stories as to how they eventually did it. Sometimes it takes a failure to launch before the big break.

The point is, formal training is sometimes hard to come by. There are some things you just have to learn by trial and error. That, or from a list on the internet with tips for becoming a geeky writer.

1. Write Only For What You Are Worth

This one is dependent upon what kind of writing you’re looking to do, but that doesn’t somehow make it less important. In fact, it probably only makes it more important. If you’re doing voluntary work, make sure it’s worth the effort in some way. Building up a portfolio is important, sure, but continuing to work for free can be a drain once you’ve already built one up.

The other half of that coin, working for monetary compensation, can be just as tricky. Sliding back from your current standard fees can be your undoing. It’s handy to have an idea as to what you will and will not work for in terms of per word or per article. This depends on your level of experience, of course, and even then it’s influenced by whether it’s supplementary or primary income that you’re concerned with.

Everyone everywhere will tell you at least once that it’s not what you know, but who you know. In addition, if you know your stuff and know people, you’re just about set for anything. But getting a start on the knowing people thing is invaluable. As the internet currently stands, Twitter certainly seems to be king. That could change in a year or less, but whatever platform is currently on top is irrelevant. These things come and go, but the important bit is the social in social platform. There will always be people involved. It’s just a matter of learning to interact properly. This doesn’t mean you should exploit people. Networking correctly just provides resources.

If you don’t know what your endgame is when you start writing, you have little-to-no idea of your trajectory. It’s much better to have some idea as to what you’d love the chance to write, or what outlets you’d want to be associated with. This isn’t to say that more long-term goals aren’t appreciated, but just that having ones that aren’t immediately out of reach is lovely.

As you meet these goals that you’ve set, set new ones that are even further down the pipeline. Finally started writing for that web outlet that you set as a goal? Alright, well, maybe a good new goal is to see your name in print. There’s just something about having your name as a byline in a physical product that’s satisfying.

4. Do What You Say You Will

Part of being a freelancer — or whatever position you hold — is providing content on a timely basis. Sometimes this is stuff that’s pitched to an editor, if freelancing or holding down a regular position, and sometimes this is based on your own timetable if writing for a volunteer blog or the like. Regardless, professionalism is key in all situations.

If you pitch an article and it’s accepted, not meeting that deadline isn’t exactly unacceptable in all cases, but it is frowned upon. If you can’t meet it, don’t let the submission time pass unacknowledged. Make sure to update your editor as required; most will be understanding. Things happen, but being known for missing deadlines without good reason won’t do you any favors.

That’s not to say that you can’t write informative articles about topics with which you’ve only been recently acquainted. Heck, that’s basically what blogging is all about! But nothing compares to sitting down and learning about what it is you’re writing about. If you’re talking about mobile technology, your articles are going to be much more well-informed and insightful if you know the ins and outs of mobile technology. Knowledge, after all, is power.

This one is straight out of the textbook, but is important enough that it deserves extra emphasis. Whatever kind of stuff you’re writing, whether you’re a blogger, journalist, freelancer, contributor or someone who only writes op-ed pieces on the weekend, knowing your audience is the only surefire way to generate interest.

The importance of this can’t be stressed enough. In order to be funny, you need to know what your audience will find humorous. In order to appeal to them, you have to know what they enjoy in life or find interesting. Tone, vocabulary, formal or informal, academic or not: Knowing your audience is the lifeblood for a writer of any discipline.