Time-Lapse of Building a LEGO Ship in a Bottle [Video]

MOCpages user Julia Morley decided to build a LEGO ship in a bottle, mainly because how cool is that. She bought a $7 jug of wine (which she poured down the sink due to it supposedly being awful to drink), filled the bottom of the bottle with glass beads and floral resin in order to create a flat surface on which to work, and made some tools to aid in the ship-imprisoning process. She used LEGO design program Bricksmith to design the ship, then devised a plan to build the ship back-to-front with LEGOs that would fit into the bottle. Being fully aware of the kind of digital voyeur world in which she lives, Morley documented the process with a time-lapse video and posted it for all to see. As the beginning of the video states, the “project took a week of planning, three days of building, a large number of expletives, and some interesting use of very long tools.” Head on past the break to see the custom tools Morley made in order to build encase a LEGO ship in a bottle. 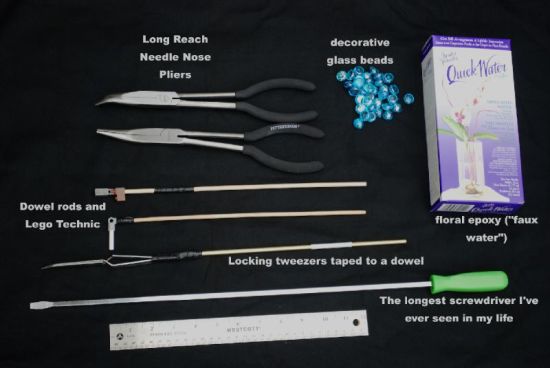