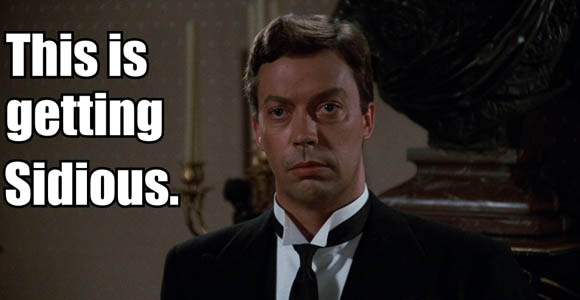 Tim Curry, Master of Awesome, has just landed a role on Star Wars: The Clone Wars.

Curry will play Chancellor Palpatine/Darth Sidious, according to Big Shiny Robot.  They write, “Just over a year ago, Star Wars fans were saddened to learn of the passing of Ian Abercrombie, the voice of Emperor Palpatine on The Clone Wars. He’d recorded many yet to be aired episodes before the time of his death, and the question of who would resume so vital a role was chief among many questions about the future of The Clone Wars.”

Turns out that person was Curry. BSR says he’ll be making his debut in the season finale this Saturday.

Supervising Director, Dave Filoni told them, “We had an extensive search to find a new voice for Palpatine. It wasn’t just a matter of finding an actor who could to recreate lines from the films. We needed someone to deliver a performance that could stand alongside what Ian McDiarmid and Ian Abercrombie created as this legendary Star Wars character. At the end of the day, there is little question that bringing in an actor of Tim’s caliber was perfect for Chancellor Palpatine.”

Filoni also said Curry could “definitely tap into the dark side” which you probably already know if you’ve seen him in It, Legend, or dare I say, Congo?