TIFF Interview: The Ones Below Writer-Director David Farr on the Loneliness of Urban Parenting in His Creepy Thriller 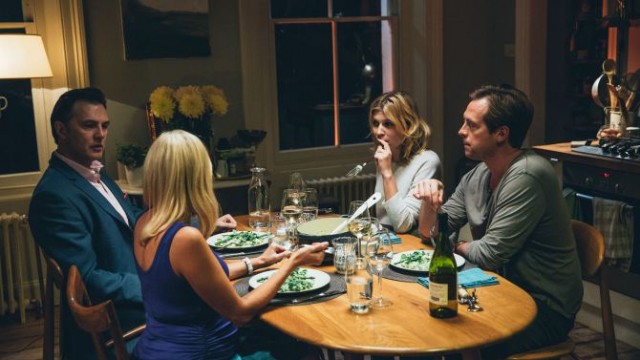 One of the standout films at this year’s Toronto Film Festival is the dark and lean thriller The Ones Below, a tangled, London set film about two about-to-be parents sharing a duplex. 10 years into their marriage, Kate and Justin (Clemence Poesy and Stephen Campbell Moore) anticipate the birth of their first child, a child Kate wasn’t sure she wanted until a few months before. New neighbors Theresa and Jon (Laura Birn and David Morissey) react badly to such thoughts, having tried to conceive for 7 years and only now expecting their first child together. David Farr, a playwright and theater director, makes his directing debut, having previously written the smart action film Hanna. At the festival, Farr spoke with us about this haunting thriller.

Lesley Coffin (TMS): I really liked the movie, but I also left the screening feeling very unnerved by everything you’d depicted. The emotional torment you put the characters through is just so unsettling to watch. Where did the premise originate from for you?

David Farr: I was directing Harold Pinter drama called Homecoming, which is a very menacing drama. And I was talking to an actor about both of us being dads, and the anxiety of parenting came up, specifically the strange loneliness of parenting in a big city. And we had both felt that, and the sense that if we had our kids in different communities and at a different time, despite not having as much money, we might not have had those feelings. And it struck me that there is a strange isolation now, raising children in a big city such as London, even if you have the financial security to live there. And I literally went to sleep and woke up with the entire idea formed.

I had the whole set-up and I believe the ending. Obviously the characters weren’t completely formed, it was a strange sketch of the couple above and the couple below. But the whole idea came from this organic place, because I’m fascinated by the lives of others. One of my favorite stories, which I’ve adopted for the stage, is Kafka’s Metamorphosis, with the family below hiding something above. And after I came up with the idea, I knew that the film was essentially about our protagonists Kate and Justin; their relationship, how much they loved each other, and how much they trust and feel secure with each other. And the others, the ones below, they become this slightly existential threat to our protagonists’ stability.

So we have the actual story, what is literally going on, but the opposition of the two couples’ relationships is the real threat, which is what you get in good Polanski or Hitchcock. That is where the feeling of unease comes from you mentioned.

TMS: The visual look of the movie is pretty fascinating, because the below apartment, the threating home, has this bright, candy colored looking, almost like something from Edward Scissorhands suburbia, and the above apartment is full of neutral colors and lots of shadows. What were you thinking about when deciding how the two apartments should look and differ?

Farr: Well, Edward Scissorhands actually was a big influence for me on this movie. But what we wanted with the color palette, the bright yellows and greens, was that we wanted it to look strangely clean. The sense that they had made a real commitment to have a perfect environment for their child. And upstairs would have a modish, shabby, chaos to it, although they aren’t really shabby, their home is actually quite elegant. But they have antiques and are very laid back in their style.

They aren’t committing to any specific style, which is basically my own style and very of this time. And I thought what would be interesting is if their cool lifestyle were being tested and put under the microscope a bit. The film has a lot of autobiographical elements, not in the story of course, but it is very personal in the sense that it captures my own reaction to fatherhood and that sense of responsibility and pressure and having to ask how much do you love. The film in a way is about love. The downstairs couple really love with a fierceness and confidence, and the upstairs couple love as well, but they love with uncertainty and confusion. And I think that is a beautiful thing about them, but when you see that kind of confident love it can also make your love feel very fragile.

TMS: You mention an autobiographical element, but the focus is really on the two women and their connection through motherhood, specifically what Kate is going through as a new mother. Why did you choose to focus on the women, rather than Justin and Jon?

Farr: It’s a really good question actually, because originally I wrote the film from Justin’s point of view. I suppose because I’m a guy and I’m a father. But it just didn’t work, and a few pages in I had a light bulb moment. Writing is weird that way, because literally the script would not write, and as soon as I made that change and said “this is her story” it just happened. And then the meeting between the two women happened and I remember thinking “this is it, this is really working.” My favorite scene in the movie is during the dinner party when Theresa says to Kate, “It is hard isn’t it.”

And they have a moment that’s shared only between them, but you also sense that they are deeply alone because you know that Theresa means something scarier than Kate. She really does mean it’s hard. You feel terrible depths of something, even if you don’t know what, and that she’s right on the edge. But that shared moment between these two women during a dinner party really worked. You can reduce this story to a fairy tale, and I realized that when I was editing the film that is what I’d made. It’s the princess in the tower, who looks down to find another princess in the garden. And fairy tales are, as this is, often very dark. Read the original story of Cinderella and they chop a poor girls toes off.

TMS: Oddly, with the exception perhaps of David Morrissey’s character, because we see the least of him, you do feel real sorrow and pity for all the characters at some point in the movie. And you only really see the four of them together in two scenes, once when it seems they could be friends, and then the other when they have a fight. How did you map out how much time the four characters would spend with each other to develop their twisted relationships?

Farr: I’m glad about that you felt badly for them because you should feel pity for Theresa as well. There was a point in the story when I thought the four of them could have more scenes together, but I was concerned about the film feeling cinematic, because I come from the theater and was aware that I didn’t want to be telling a story I could just as easily do as a play. So I choose to keep those scenes very, very lean. But we shot more stuff, really good scenes, which we just had to leave on the cutting room floor because the film wasn’t feeling aggressively lean enough. And I just kept coming back to scenes of the two women. That was the thing that really worked.

TMS: How did you cast the four leads?

Farr: It was in many ways entirely conventional. Laura came in very early, because she was the inspired idea of our casting director. And she gave a great reading for the part of Theresa, and afterwards we just said “that’s it.” Because she was the only person who had the ability to convince me that she could have a sunny optimism. Everyone else were immediately terrifying. And while you immediately know there is something going on with Theresa, there was still a lightness and sweetness to Laura’s performance. I knew both the guys, Stephen and David from the theater, so they were easy to cast. Clemence was really the surprise, because she’s French and I thought, “We can’t have a Frenchwoman, the movie is about Londoners.” But she proved her accent and was unbelievable during her audition. She was so quiet and so intense. She just got it, right away.

TMS: You mention Polanski and Hitchcock, which at points the film reminds me of something they would have wanted to make. Were you looking at films for inspiration?

Farr: Well, when making it I didn’t watch anything because I was so consumed by the production. But beforehand I watched a lot of things. Because it was important, to make it really clear what the film should look and feel like. So for example, the color palette you mentioned before, we were extremely strict about it because these ideas can drift away when rushing around. You can find a location that seems to be in the perfect location and has a window right where you want it, but doesn’t have the colors you want and don’t have time to change it. So there goes the color palette.

And directing is tough that way, because you have to be nice, but you also have to be tough, because everyone else is so determined and well intentioned about their own specific jobs. So I said, “No, we are making this kind of film, or else it won’t work” and referenced other films as examples that were really strong, simple, and clear. And I did the same thing with the performances, they had to be exactly right. So beforehand I talked about a lot of different films, especially with our DP. And not just Polanski and Hitchcock. We talked about Don’t Look Now and the way they shot that film and used zooms in a very unconventional way, because Nicolas Roeg is a master of zooms. We talked about lots of the French directors too. We talked about all that beforehand.

TMS: When you’ve shown the film to mothers, what have some of their reactions been to the film?

Farr: Mostly they’ve responded to the sense of isolation they’ve felt, which is not spoken about often. What we know as post-natal depression is way more common than we even know, usually in a smaller ways than what we hear about on the news. Most probably associate post-natal depression with when we hear about suicide, but it is actually a very common thing that happens on a much smaller scale to most mothers. Mothers say they know exactly what it is, and it’s a very complicated problem due to chemicals and genetics and this life-changing event. So the film, in its own small, strange way, raises the curtain on these issues a bit. And I’m just pleased that the film seems to resonate for many mothers.