The Mary Sue at TIFF: Freeheld and Colonia

True stories worth telling, but hurt by problematic storytelling. 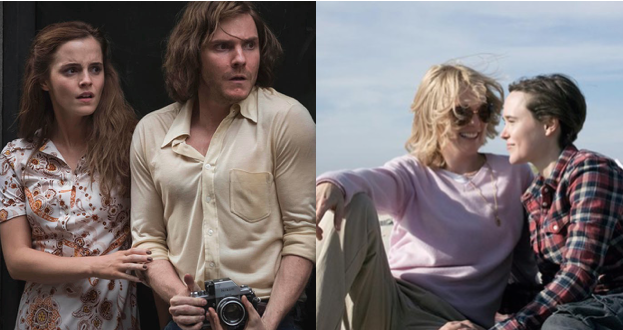 When calling a film disappointing, it doesn’t necessarily mean the movie is terrible or even bad. But in the film world of posters, trailers, and general buzz, I certainly anticipate certain films more than ever. Sometimes a highly-anticipated movie being mediocre is more disappointing than seeing a bad movie you had no expectation of.

Colonia and Freeheld were those movies for me at this year’s TIFF, two films I thought could be great…and turned out to be major disappointments. Most of that failure had to do with the glossy, melodramatic scripts given to these compelling real-life stories, which made them feel more like ’90s made for TV-movies than highly anticipated feature films.

Freeheld is a story I was excited to see brought to the screen, especially after watching the documentary it’s inspired by. A true story set in the early 2000s, police detective Laurel (Julianne Moore), wants to leave her highly deserved pension to her wife-partner Stacie (Ellen Page). New Jersey law at the time didn’t allow for these rights, and freehold commissioners rejected her request after Laurel was diagnosed with advanced lung cancer. The film is part love story, part legal drama…and I hate to say I found splitting the two so sharply down the middle might have been part of the problem in this narrative adaption of the documentary.

There is no doubt that the real-life partners Stacie and Laurel were as loving a partnership as any. But even with great actresses like Julianne Moore and Ellen Page, a rushed approach in the script to their relationship hurts the relationship at the heart of this film. Which is too bad, because there is no reason that the film had to have a meet cute or scenes of their early courtship. There are a lot of films which look at marriages forced to overcome problems, and for good reason, few of them start from the very beginning of their relationship. Even starting at their decision to travel out of state to get married would have avoided the problem the film is really hurt by…their initial attraction isn’t as strong and authentic as it really needs to be to propel the quickly-edited love story.

That isn’t to say that Moore and Page aren’t good in the film. But Freeheld never seems to know if the movie is about this couple or the larger fight, and the two sides of the story conflict with rather than compliment one another. When focusing on the legal issues, the majority of the focus is on Steve Carrell and Michael Shannon’s characters, who advocate Stacie and Laurel. Shannon is great (Carrell seems missed cast), but the shift is abrupt and problematic. Page is fantastic in the film, especially in her final speech, but she doesn’t have enough to do in it.

No one will deny that the case is important…I’ll say again, Cynthia Wade’s documentary the film is based on is stellar and more than deserving of the Oscar it won. But what that film managed to do was look objectively at both the couple being impacted and at the legal claims made against these women, and point out the legal and ethical hypocrisy. While that film could certainly challenge some non-believers’ minds, I can’t imagine the same with Freeheld. Freeheld goes for sentimental manipulation, rather than using the script to discuss and shine a new light on this important issue. And while the film is certainly emotional (everyone in my audience cried), it has that bad feeling of an issue movie created from the very beginning to be an awards contender, rather than earning that kind of praise through execution.

Colonia is also a film that was clearly made with too much “contender gloss” to create a genuinely compelling story. Part thriller, part star-crossed love story, Colonia tells of the Colonia Dignidad cult in Chile and a German couple (Emma Watson, Daniel Brühl) who escaped it. Revolutionary Daniel (Brühl) is captured during a military coup and sent to the cult’s torture room, and Watson’s Lena joins the cult in hopes of finding him. For almost 6 months they lived in the camp, separated by gender, which is controlled by Michael Nyqvist’s Paul Schafer.

The story sounds interesting, and the skeleton structure actually is. I knew very little about the political events in Chile, but knowing something about the nature of other cults, you can certainly understand how this place existed and controlled people. Specific foods, sleep deprivation, isolation, and public humiliation were all employed. The big issue the film has is how confused I was regarding how this system worked and its actual involvement with the Chilean government (for example, why did the military bring Daniel here in the first place?). And while the film motivated me to look some of this up (I even added the documentary The Battle of Chile to my queue), it didn’t make the movie I’d just watched seem any more enlightening or compelling.

In fact, the more I looked up, the more I felt that the film had intentionally avoided the sad, grim facts to appeal to mass audiences. Colonia feels exploitative because the film assumes audiences will apparently only care about what happens to our leads, rather than the real people who died horrific deaths during this time period. Even the couples extended “love” scenes at the beginning, feel a bit too much like the Jack and Rose relationship in Titanic…as if they were included because the filmmakers thought “we need to make audiences care about the characters.” Actually, you don’t. When it comes to a story focused on the torture of innocent people…I’ll care even if I don’t see them making breakfast or making out.

Nyqvist is somewhat scary as Schafer, but his performance feels like an actor playing up cult leader clichés we’ve seen in too many TV dramatizations. Brühl is generally solid, although even he can’t play the man pretending to have brain damage without being embarrassed. Watson too, who has grown into an excellent adult actress, is pretty good, even if her character looks too made up considering the hardships she’s put through. But both actors have to work harder than should be necessary due to some very clunky, melodramatic dialogue.

Although I would still probably recommend people see Freeheld (although it might be a better rental), both of these inherently dramatic true stories suffer from the Hollywood treatment. Both films underestimated audiences’ capacity to understand complex issues and have empathy for characters being treated unjustly. Watching both films, I kept feeling like the filmmakers were lying or trying to mislead me because they didn’t have faith in their own story…and that is a horrible feeling to have when watching a movie which wears its “based on a true story” claims as an honor.