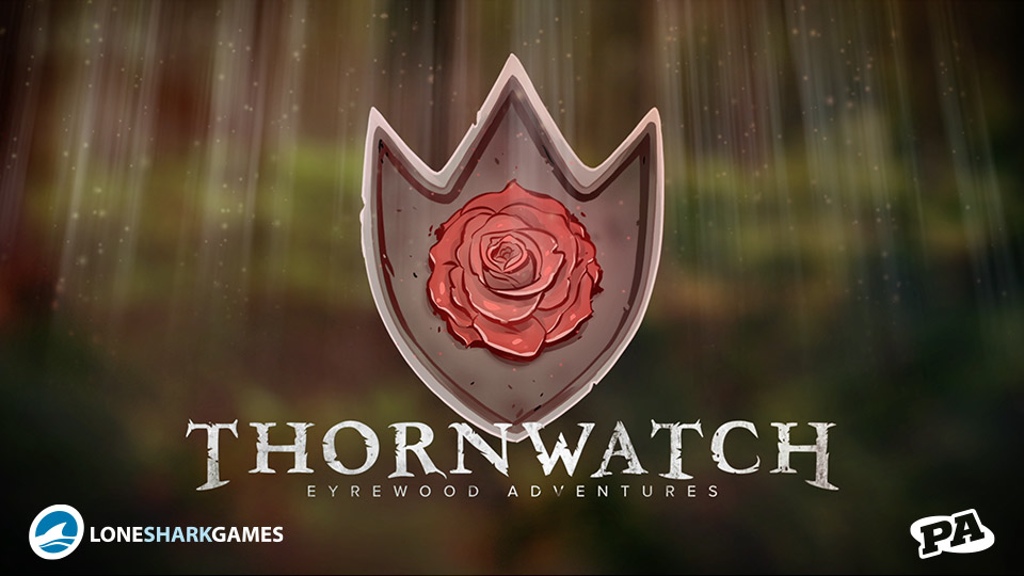 The hybrid tabletop game Thornwatch has been on a long development road. Based on a Penny Arcade comic that started back in 2009, a version of the game known as “Eyrewood Adventures” popped up at PAX Prime in August 2015, then rebranded as Thornwatch at PAX East in early 2016, then with more major changes this August. The game finally found its voice when developer Lone Shark Games got involved, whom longtime tabletop players might recognize as working on the popular Pathfinder Adventure Card Game.

In its finished state, Thornwatch is designed to be approachable for those unfamiliar with tabletop gaming. On top of that, its primary selling point is being designed for short sessions, with games that might last anywhere from an hour to an afternoon, but won’t stretch into weeks-long affairs that can be difficult to maintain with a consistent group. As far as the story, the Kickstarter (which is fundraising for a physical edition of the game, though a digital version is already available to play), puts it like this:

“Thornwatch bestows upon one player the role of the Judge, who enacts the will of the Judging Wood. Each other player plays a Thornwatch character: the Blade, Briarlock, Greenheart, Guard, Sage, or Warden. The game begins with the Judge selecting a storyboard in which the Thornwatch manifest before a tree adorned with a knot of thorny brambles, surrounded by conflict. If the players overcome this first challenge, the Judge offers choices that lead to new storyboards and further adventure.”

While I imagine some of TMS’s older readers might be a bit hesitant at giving support to a Penny Arcade-adjacent project–the Dickwolves debacle is gone but not forgotten–this game seems designed to open itself to a far larger audience, with the original property as more of a touchstone. Lone Shark developer Mike Selinker and Penny Arcade writer Jerry Holkins were able to give me a few details on the upcoming release.

Vrai Kaiser (The Mary Sue): Would you mind giving a sort of brief bio-snapshot?

Jerry Holkins: Mike Selinker is a game design paragon at the tiller of a bizarre, subterranean game-cult.

Mike Selinker: Jerry and Mike [Krahulik] helm a mystical skyship that hovers over us and occasionally blares its wisdom from on high.

Jerry: It’s a little long for a business card, but I’ll take it.

The game supports 3-6 players. Is it designed to consider those who want to play online or don’t have access to an in-person tabletop group?

Mike: We’ve gotten this question a lot. At this stage we’re not sure about online play. I mean, it’s gonna happen regardless of whether we do anything to enable it. But it’s more about whether WE have the ability to focus on that and do it right. As with all our games, we want people to play however they can.

Is [the game] built for a set narrative, or is there space for GMs to worldbuild and create their own stories a la Pathfinder?

Jerry: The Eyrewood is vast, and it’s our expectation that players will chart much of it in their own games. There’s the places only I know about, that I haven’t told ANY of the Mikes that work on the games about, but that’s all just the bread for the sandwiches you make at home. We think of our job as being to provide haunting locales, and sparkling idea dust, and if we’ve done our jobs correctly you’ll have a hard time not taking up the reins. But even in the base adventures, there’s lots of branching you can take on to expand an individual evening’s scope.

Mike: Judges are highly motivated to custom arrange storyboards into their own adventures, and even make their own storyboards out of the pieces we give them. The permanence between sessions transfers throughout the player’s evolution in the game, rather than the characters. We hardwired in cosplay: you get to wear your knots and they have potentially permanent influence on your gameplay. Not to say we don’t have deeper advancement plans down the road in Eyrewood Adventures. From this much will bloom.

Thornwatch is said to have a spectrum of gender in player roles. Could you expand on that?

Jerry: Oh, sure. When I came up with the original Eyrewood story–The Lookouts, somewhat shamefully in an Arby’s–it was specifically called Fantasy Boy Scouts. Having been in scouts myself, and secured a badge or two, I loved the narrative and the drive it created for the characters.

One of the first pieces of fan art we ever received was of a girl in the Lookouts garb. And she was great. So I created an entire parallel destiny for girls in Daughters of the Eyrewood, embroidering their place as a kind of Eyre nobility. But it didn’t answer the original question: are there girls in the Lookouts? That’s a question we answer in the graphic novels, in one way. There are other ways, also, and I loved writing how. Spoiler Warning, I guess, but yes. There are. They belong there.

The Thornwatch was originally based on Lookouts, so they were all men at the time, but there was no reason for it. No lore reason, no narrative reason, no game reason, nothing except “that’s how it was before” which isn’t good enough. When I wrote the flavor text for the trait cards, I just swapped gender back and forth each time. If you open this box, and a player doesn’t find themselves in there somewhere, I failed.

Mike: I said to Jerry when we took on this project that gender specificity can be great for a story but lousy for a game. Mike K talks about Thornwatch like a “fantasy A-Team,” so that’s a good example. In the TV show, it was a bunch of predictably macho men doing the work, and one woman that followed them around and looked pretty. Whether or not that makes a good show, it’s terrible for a game where we want people of all genders to feel at home. So we’re gonna seek out the balance and make a game that everyone can see themselves in.

We have two versions of every character. If people want to think of them as binary, I suppose they can. But we choose not to call them “the female Blade” or “the male Warden” or “the transgender Briarlock.” You decide who you want to be.

I will say that while we’re sure there’s significant gender diversity in Lookouts and Thornwatch, we have all agreed to punt the question down the road for Daughters, which by its very name suggests a specific direction. I expect some interesting discussions about that one.

Has part of the focus of development been to increase the diversity of voices [on the creative team], and how?

Jerry: The team started with Mike Krahulik, because he was the one who got the idea in his head somewhere to “fix roleplaying games,” but Kiko Villasenor, Jamie Dillion, Mike Fehlauer, and Kenneth Kuan really beat it into shape. But the fact of the matter is that we didn’t have the breadth of ideas and approaches that it needed to become a real game. We hit a wall.

While we’re on this subject, I’d love to bring this answer back to the last question: When I said we’re doing a game called Daughters, our designers Liz, Gaby, Aviva, Elisa, and Tanis all perked up and did the seagull “Mine!” sound from Finding Nemo. Now that all five of them are freeing up from the design and development of the Mummy’s Mask set for Pathfinder, the Betrayal expansion Widow’s Walk, and Apocrypha, I expect some of them will get the chance to bring that potentially very important game to life. We’ve seen young girls in Daughters cosplay in great abundance already. Not long from now, they’ll have a tabletop game where they are the focus of attention. I think they’ll like that.

Daughters isn’t due out for a while, but those are some tantalizing details. Any further comment?

Jerry: Oh, for sure. It’s the most mysterious of the settings, because for fully two thirds of the established factions in the Eyrewood, the Eyrewood is a place of constant danger. To the Daughters, Mothers, and Crones, it’s home.

What you’re most excited for people to discover with the game?

Mike: Mike Krahulik has laid before us a type of game system we’ve never seen before. We’ve been working in the space between RPGs and boardgames for a long time, but this is the first one we’ve done that captures the flow of an RPG without any of the preparation a gamemaster typically has to contend with.

Jerry: For me, it’s an opportunity to finally set down all the work I’ve done on the Eyrewood on paper. The game gives me a vessel to fill up with made up words and the kind of premium nonsense, which is my specialty.

The Thornwatch Kickstarter campaign is set to end on October 5th, and the team has already announced that the first planned expansion, Dark of the Wood, is available as a backer reward.

Vrai is a queer author and pop culture blogger; they roll to charm the audience (with loaded dice). You can read more essays and find out about their fiction at Fashionable Tinfoil Accessories, listen to them podcasting on Soundcloud, support their work via Patreon or PayPal, or remind them of the existence of Tweets.