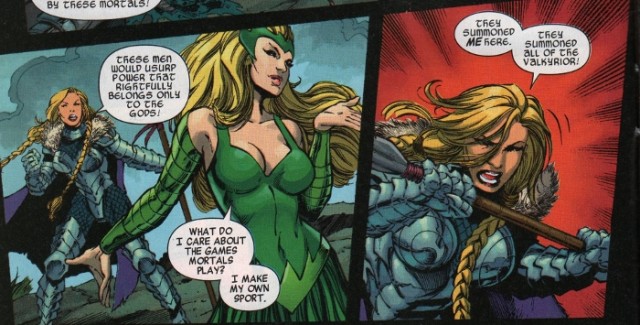 Apparently, Thor: Ragnarok is going to be dark—darker than all of those other Marvel movies we’ve seen so far. That’s why Birth Movies Death says Marvel brought on comedy director Taika Waititi, who notably helmed What We Do in the Shadows and a few Flight of the Conchords episodes; Waititi’s comedic sensibilities should help balance out the heavy script.

Speaking of that script, the news that Hulk would appear (and that Loki might appear) has already circulated, and now speculation has it that Thor and Hulk will meet up with some Valkyries. They might even meet up with one Valkyrie in particular, a.k.a. Brunnhilde, pictured above in armor in a scene from Fear Itself. The other woman in the panel above? The Enchantress, yet another Asgardian magic-user. Where rumors about Valkyrie appear, so too do rumors about the Enchantress.

Of course, all of this is wild speculation, but it would be pretty cool to see two women added to the roster of a film that, up ’til now, has been described as a movie about two male characters. Who would you love to see cast as Valkyrie or the Enchantress? Let’s go ahead and get fantastical.