Things We Saw Today: This Ranking of States Has Everyone Mad 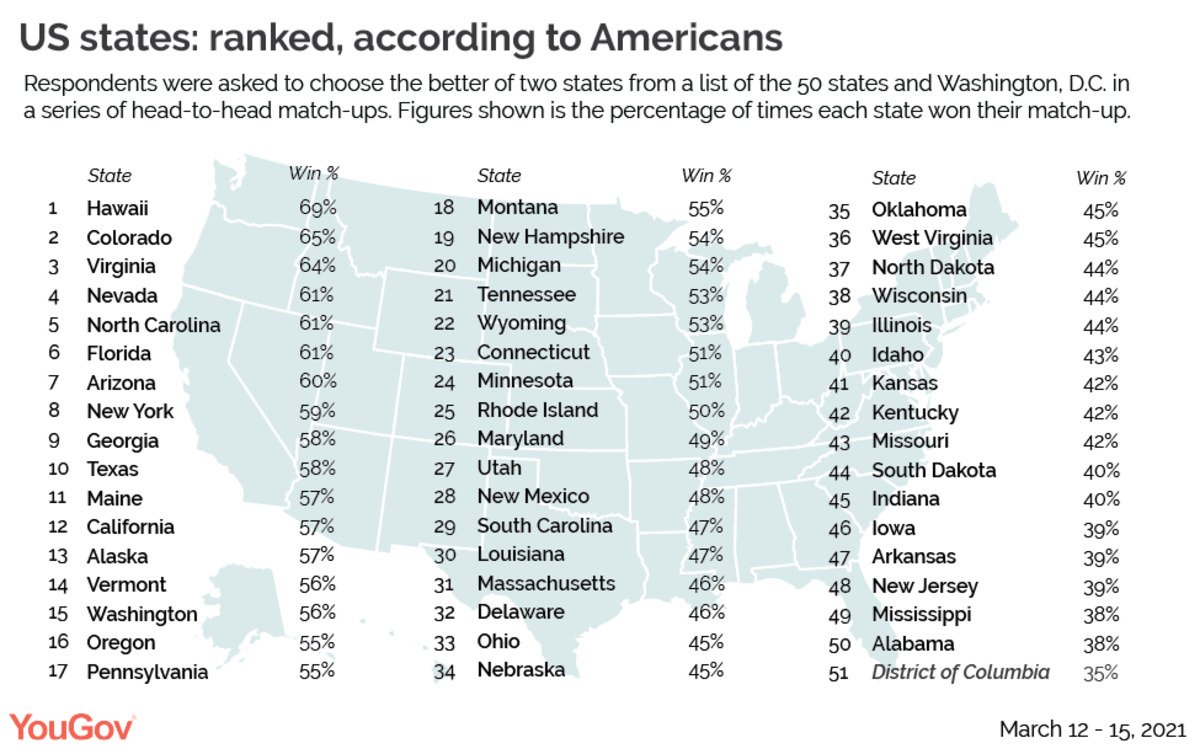 There’s no better way to get people mad on social media than a ranking. It really doesn’t matter what you rank, only that you say one thing is better than another, and boom, fight time. It’s a tale as old as the Apple of Discord but that doesn’t make the fights any less brutal or ranking any less annoying. Just take a new ranking of all 50 states that came out today from pollster YouGov which had everyone pretty mad.

For this survey, “1,211 US adults were asked to choose the better of two states from a list of the 50 US states and Washington, D.C. in a series of head-to-head match-ups. The survey was conducted between March 12 – 15, 2021.” The results are … something. Now, I cannot argue at all with number 1, Hawaii. (69% win rate? Nice.) It’s beautiful, peaceful, and just all around one of the best places on earth. So good work there. YouGov also gave Colorado props for recreational marijuana, as well they should.

But number 3 is Virginia? Why? YouGov claims it’s “a destination for American history and ocean coastlines?” But how does that outrank California? Was voter suppression a positive factor for respondents that got Texas and Georgia up there? And as an Oregonian, nothing makes me angrier than seeing us right behind Washington of all places.

Everyone has something to say!

the fact that massachusetts, a beautiful COMMONWEALTH with lovely mountains, wonderful people, maple syrup, and a great baseball team, ranks lower than connecticut, a state that consists of nothing but investment bankers and highways, is a travesty. https://t.co/xibY60WVAu

The perception Americans have of DC is a lifeless place filled with cartoonish feds not bearing much resemblence to the actual people who live here. Mostly what Americans hate about DC are the people they themselves sent here. DC is a wildly underrated and genuinely great city. https://t.co/4dM0fYaaqk

Virginia is number three? If you asked me to name all 50 states, I’m not even sure I would remember Virginia. https://t.co/ZdBIZc6Tng

The residents of #48 ranked New Jersey, in particular, are not taking this news well.

I’m so happy you all hate NJ. Please don’t move here. We want to keep the good vibes to ourselves thank you https://t.co/jmurdTLPos

Me to all the people who so disrespected New Jersey: https://t.co/UaZgJyioXG pic.twitter.com/0xGMHWfYc7

one town spends a few weeks under the psychic control of a renegade superhero mourning her synthezoid husband and all of New Jersey pays for it https://t.co/xqKmcHpYSG

What this really tells us is that ranking things is a fools errand … but we also want to know what you think of this ranking, so sound off in the comments!

Here are some other things we saw today as well.