ThirdLove: The iPhone App to Determine Your Correct Bra Size

"Nothing's sexier than the right fit. Except perhaps no clothes at all." Have you never seen Tina Fey eat a pizza? 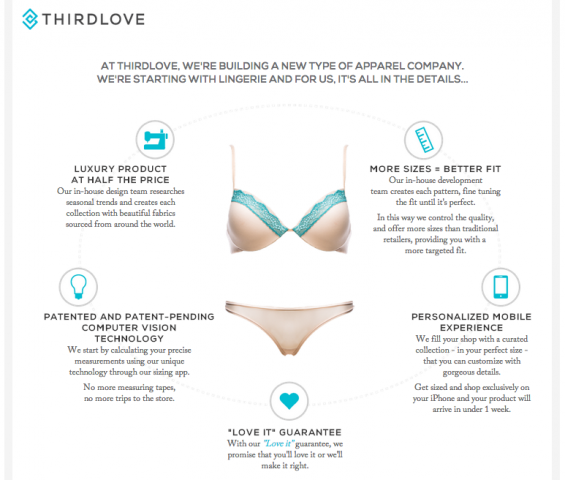 Okay, you know that scene in Lizzie McGuire when she’s all, “I want a bra, okay?! A bra!” (whatever happened to Hillary Duff, anyway?)? Well, it’s not quite as simple as saying the words and everything magically working out– some reports say 70-85% of women wear the wrong size. So, of course, there’s an app to fix that.

New clothing company ThirdLove has made an app that supposedly helps determine the “perfect” bra for you, and all you have to do is take two pictures. And no, you don’t have to be naked– just in a supportive bra (assuming that you’re not so desperately in need of this app to not own one) and a tight top. A (totally not creepy) robotic voice walks you through how and where to hold the phone and take pictures in a mirror, because we now live in a future where the robots use us to get their jollies. Then you line up the image of the iPhone with a box on the screen, so the program can use it as a reference point, and it determines your measurements.

Here’s where there might be a small conflict of interest in labeling this app a savior to tween girls everywhere. Instead of ever, you know, telling you what your bra size is, the app brings you to a page of custom  bra styles from ThirdLove. So while you can then (theoretically) get some well-fitted bras from one specific company, it doesn’t actually help you shop literally anywhere else.

It’s also pretty closed-circuit, with ThirdLove’s lingerie only being available via the iPhone app, the first clothing company I know of to do so.

The app is still in private beta testing, but should be available at the end of September.

(via TechCrunch, image via ThirdLove)