Honor his legacy and VOTE. 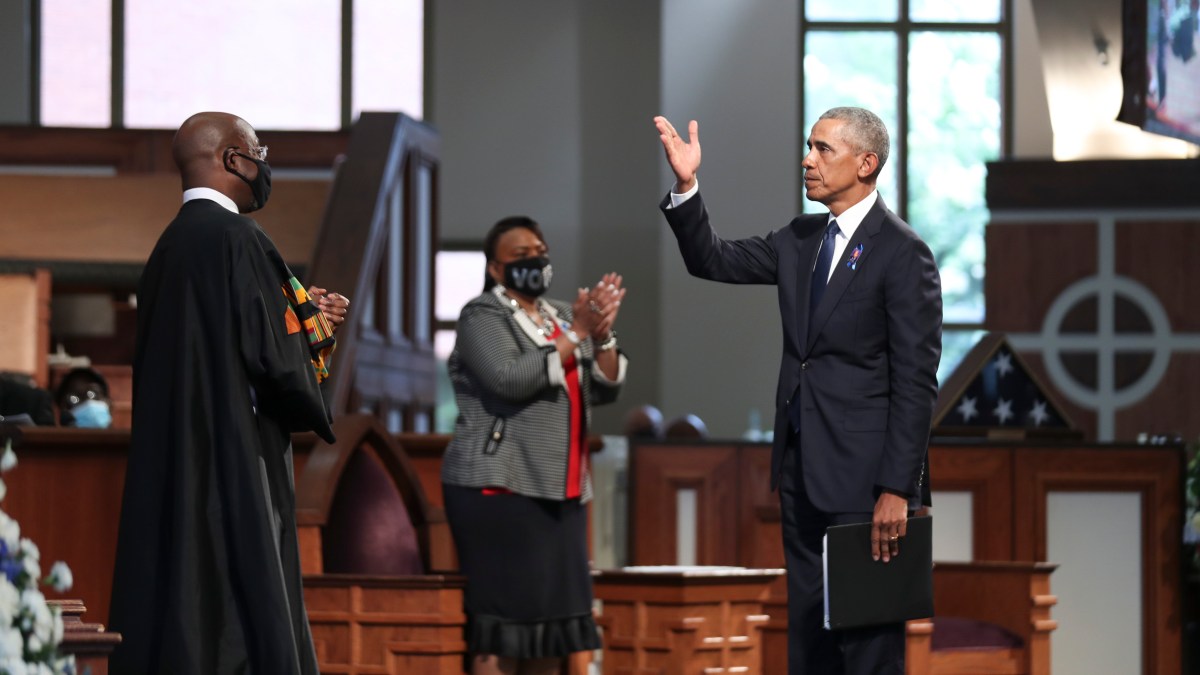 Mourners from across the nation gathered in Atlanta today to lay the late congressman John Lewis to rest. President Barack Obama, the first Black man to hold that office, delivered the eulogy for the civil rights icon, following remarks from leaders on both sides of the aisle, from House Speaker Nancy Pelosi to Presidents George W. Bush and Bill Clinton.

The ceremony was held at Ebeneezer Baptist Church in Atlanta—the very same that Martin Luther King Jr. attended. Hundreds assembled inside and outside the church to remember the congressman, a man who fought for civil rights alongside King, who passed away on July 17 at the age of 80. A memorial in Troy, Alabama was held for Lewis last Saturday before his body crossed the Edmund Petus Bridge, where he once marched for civil rights under brutal attacks from police as a young man, one last time.

President Obama focused on Lewis’s legacy, on what he fought for and the ways those precious rights and freedoms remain under threat even now. Obama used his eulogy to encourage everyone to vote and to uphold and expand the voting rights act.

“You want to honor John, let’s honor him by revitalizing the law that he was willing to die for.” — @BarackObama calls on Congress to expand the Voting Rights Act pic.twitter.com/7jzvsqgbNH

On a day when the sitting president of the United States publicly contemplated delaying this year’s election, President Obama also reminded us that exercising our right to vote is so incredibly important. It was something John Lewis was willing to die for and a cause he lived for, but the most moving words today, on that same topic, came from John Lewis himself.

In an essay for The New York Times written in the final days before his death, and which he asked to be published on the occasion of his funeral, Lewis spoke to the nation he loved and reminded us what’s important, and that though the is gone, his cause is not. He shared how the movements for racial justice continued to inspire him into his final days, and how he maintained hope that progress would continue to march on. Lewis wrote,

Democracy is not a state. It is an act, and each generation must do its part to help build what we called the Beloved Community, a nation and world society at peace with itself.

Ordinary people with extraordinary vision can redeem the soul of America by getting in what I call good trouble, necessary trouble. Voting and participating in the democratic process are key. The vote is the most powerful nonviolent change agent you have in a democratic society. You must use it because it is not guaranteed. You can lose it.

Though John Lewis is gone, his fight is not, and there is no better way to honor his legacy than getting out to vote and getting in some good trouble to make sure that everyone else who can, does.

In that spirit, where we would usually give a few other “things we say today” here, we’d like to share some important resources to make sure that you and everyone you know is ready and able to vote this November.

And finally, and most importantly, when the time comes, vote like your life depends on it and remember these final words for John Lewis when you do:

Though I may not be here with you, I urge you to answer the highest calling of your heart and stand up for what you truly believe. In my life I have done all I can to demonstrate that the way of peace, the way of love and nonviolence is the more excellent way. Now it is your turn to let freedom ring.

When historians pick up their pens to write the story of the 21st century, let them say that it was your generation who laid down the heavy burdens of hate at last and that peace finally triumphed over violence, aggression and war. So I say to you, walk with the wind, brothers and sisters, and let the spirit of peace and the power of everlasting love be your guide.