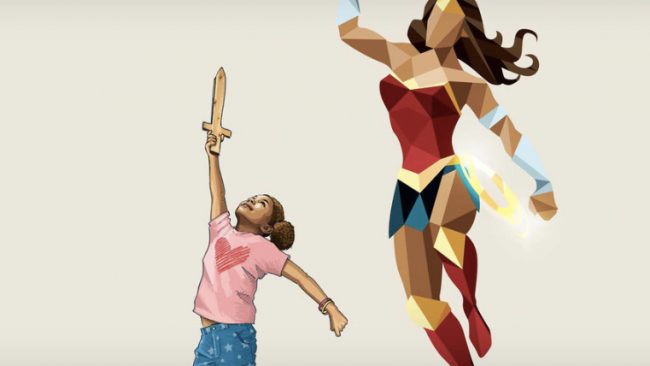 (Image via Jason Ratliff. You can see more of his superhero shadow images here, and prints are available for purchase at Curioos.)

Twitter has been abuzz with adorable pictures of excited young girls headed to see Wonder Woman for opening weekend, and my heart is just not tough enough. Whether they’re going with their parents, their siblings, their friends, or anyone else who inspires them, these girls look so excited to see a woman superhero. Just look at the joy on their faces as they adopt the iconic crossed arm pose.

Of course it’s also heartwarming to see boys, non-binary and genderqueer kids, and older people enjoying the film, but one of the reasons that representation is so important is its effect on the young people who get to see themselves on screen. I’m so happy that young girls are getting to see a woman hero this way, and I hope that all this joy will inspire the Wonder Woman team to amplify that happiness with an even more intersectional, inclusive sequel. (via Hollywood Reporter and Twitter Moments)

Just saw #WONDERWOMAN and it was glorious. Best superhero film, no FILM, I’ve ever watched. My sister and I loved it. pic.twitter.com/4MCwKy3Hoy

@PattyJenks My daughter & I took in #WonderWoman today. Incredibly smart! In Emma’s words “her best power is love!” pic.twitter.com/YQIjhGQDjl

(Okay, fine, this last girl isn’t dressed up aside from her awesome bow, but look at that grin!)

Time for round 2 & I brought a date. I’m even more excited to see it again because my daughter adores #WonderWoman @PattyJenks @GalGadot pic.twitter.com/TKnOg3NGxR