“They” Officially Added as Nonbinary Pronoun to Merriam-Webster Dictionary 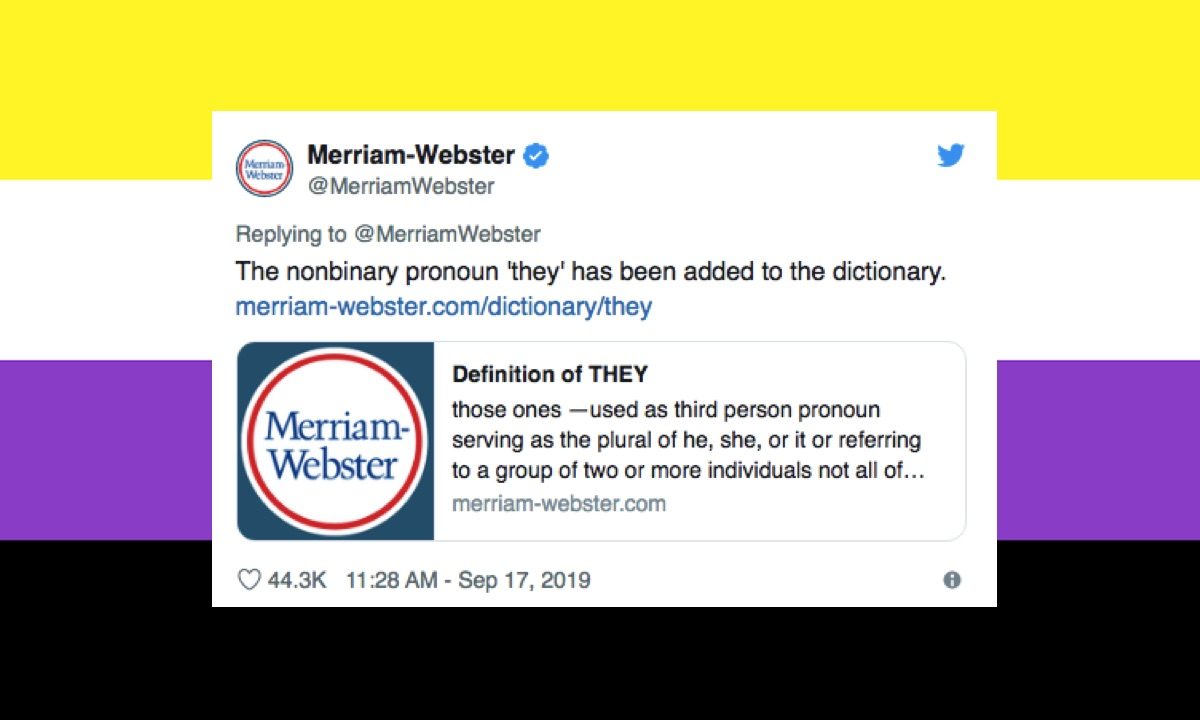 Merriam-Webster Dictionary, the word authority with the best Twitter account around, announced 530 new words entered into its lexicon for September 2019. Most exciting to see was “they” officially defined as a pronoun option for those whose gender identity is nonbinary.

The dictionary’s tweet announcement about “they” joined other words that have vaulted into popular English usage, like “Bechdel test,” “free solo,” and “deep state.” While most of the individual September word tweets from Merriam-Webster received a smattering of likes and retweets, “they” was big news, and enthusiastically received on social media.

The nonbinary pronoun ‘they’ has been added to the dictionary. https://t.co/tadl1VdfB0

“They” as a nonbinary pronoun is now the fourth usage of the word in the dictionary, so defined:

—used to refer to a single person whose gender identity is nonbinary (see NONBINARY sense c)
I knew certain things about … the person I was interviewing.… They had adopted their gender-neutral name a few years ago, when they began to consciously identify as nonbinary — that is, neither male nor female. They were in their late 20s, working as an event planner, applying to graduate school.
— Amy Harmon

In the context of gender identify, here is how Merriam-Webster defines “nonbinary“: “relating to or being a person who identifies with or expresses a gender identity that is neither entirely male nor entirely female.”

The Washington Post, writing about the pronoun’s dictionary-approved status, touches upon the importance of its recognition and how they can be “liberating” to employ. In the same paragraph, the Post notes, “For many Americans, the use of ‘they’ as a singular pronoun can be ungrammatical and confusing.”‘ This is an argument that you’ll sometimes see from people who jeer at heightened pronoun awareness in general, as well as people who claim such fanatical allegiance to grammar snobbery that it apparently overrides their ability to respect the pronouns that someone wishes to use. Yet language is a living, breathing, ever-evolving thing.

Merriam-Webster is also here to blow that specious grammar snob argument out of the water. A recent blog post on the topic points out that “they” has been used as a singular pronoun since at least the 1300s:

Much has been written on they, and we aren’t going to attempt to cover it here. We will note that they has been in consistent use as a singular pronoun since the late 1300s; that the development of singular they mirrors the development of the singular you from the plural you, yet we don’t complain that singular you is ungrammatical; and that regardless of what detractors say, nearly everyone uses the singular they in casual conversation and often in formal writing.

They is taking on a new use, however: as a pronoun of choice for someone who doesn’t identify as either male or female. This is a different use than the traditional singular they, which is used to refer to a person whose gender isn’t known or isn’t important in the context, as in the example above. The new use of they is direct, and it is for a person whose gender is known, but who does not identify as male or female. If I were introducing a friend who preferred to use the pronoun they, I would say, “This is my friend, Jay. I met them at work.”

“There have always been people who didn’t conform to an expected gender expression, or who seemed to be neither male nor female,” the blog post continues, adding of this usage of they, “It’s not quite as newfangled as it seems: we have evidence in our files of the nonbinary they dating back to 1950, and it’s likely that there are earlier uses of the nonbinary pronoun they out there.” Nonbinary people have always been here, and there have always been pronouns utilized for them. They is increasingly becoming the pronoun of choice for a great many people. It’s not going anywhere. If you struggle with using it to talk about someone, or with them, practice.

The Post spoke to Daniel Barron, professor emeritus of English and linguistics at the University of Illinois at Urbana-Champaign. “Language responds to social change,” Professor Barron explained. “Things that need to be expressed get expressed.” And even for those who are not generally hip to social change—or are much concerned about pronouns—the pronoun’s official inclusion here is important going forward:

Many English speakers consider dictionaries to be “constitutional,” authorities, Baron said. “They want to have some kind of stability in language that they can point to and say ‘here’s the rules.”

“They” as a nonbinary pronoun didn’t need a dictionary to broker its legitimacy, but this is still a lovely step in the right direction.