The Walking Dead Recap: “The Distance” 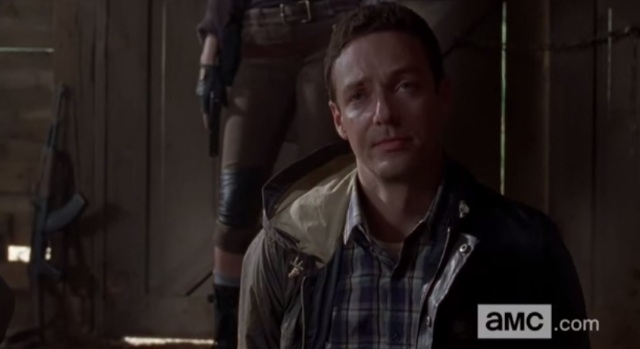 Before I jump into the recap, please note there will be spoilers ahead. If you aren’t caught up on The Walking Dead, read at your own risk!

After last week’s slightly unsettling introduction of Aaron, I was ready to get a closer look at him. We haven’t really seen anyone this clean, friendly, and put together since… well, since before the zombie apocalypse. It might be sad, but there is nothing that is a bigger red flag in a zombie apocalypse than a clean, friendly person.

Maggie and Sasha bring Aaron back to the barn to meet with the rest of the group. Aaron admits that he’s been a bit of a creeper, following the group, watching how the respond to threats, and leaving super sketchy piles of water bottles in the middle of the road for Rick and the gang. Understandably, the group is skeptical of Aaron, but at the same time, the idea of a safe, happy town is too amazing an idea to pass up–especially given the group’s decision to keep fighting in last week’s episode.

However, after Terminus and Woodbury, Rick has a seriously tough time trusting Aaron, but ultimately agrees to visit Aaron’s town. The group has a few disagreements with Aaron over how the group will actually get to Aaron’s town, and ultimately decide that the best option is for Rick and the gang to drive themselves… with Aaron tied up in the back seat. After a pretty intense car accident that reminded us all of the importance of windshield wiper fluid, the group is momentarily separated and has to fight through the part of the walker herd that did not end up splattered across the car’s windshield to find safety.

After a few close calls, the group reunites, and we meet the driver of the other car, Aaron’s fellow townie and boyfriend, Eric. The moment serves to humanize Aaron a bit, as his cheery attitude, clean-cut look, and inability to be flustered really made him seem like a too-good-to-be-true threat (a friendly threat, but still a threat). Finally, in the last few moments, the group pulls up to the gate of Eric and Aaron’s town, Alexandria, with the sound of happy kids playing in the background.

I’ve got to be honest. I really hope that this turns out to be a good thing for the group. I will be so sad for Rick and the gang if this is another outwardly beautiful, secretly horrifying town like Terminus or Woodbury. However, I know what show I’m watching. Maybe Aaron and Eric will turn out to be good additions to the group, but I really fear for what awaits Rick and the gang in Alexandria.

More than that, I’m interested to see how the group will adapt to life in Alexandria. Rick and the group has certainly been hardened from the road. As Glenn points out in the episode, if the group stumbled across another group like them, they would need to be very worried. I can’t wait to see how these two worlds collide, Rick’s road-weary gang, and the citizens of Alexandria safe-zone. I would love to see this as something good for the group after a string of tragedies, but this is still The Walking Dead. I suppose we can only hope for maybe a bit of brightness before everything gets destroyed.

What did you think of last night’s episode? What do you think of Aaron and Alexandria (if you haven’t read the comics, that is)? Let me know in the comments!