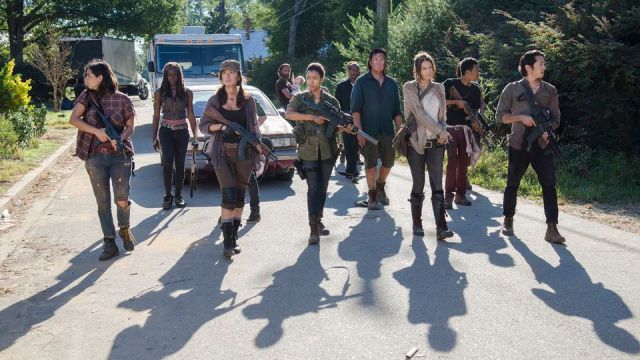 If you aren’t caught up on The Walking Dead, read on at your own risk. There are spoilers ahead!

Well, kids, we’ve finally seen the inside of Alexandria Safe Zone. I’ll be honest, it’s kind of great. The homes are gorgeous, the area seems incredibly secure, the people are super nice…

..and I don’t trust it for a damn second.

The episode kicks off as the group goes into Alexandria. Aaron directs Rick to Deanna Monroe, a Congresswoman before the zombie outbreak, and the current leader of the town. She is very gracious towards Rick and the group, despite his haggard appearance and his untrusting, mildly feral attitude–like Daryl killing a possum at the gates, and offering it up as dinner for everyone. Despite all of the group’s quirks, she still takes the time to sit down with each member of the group, gets to know them, and then offers them a job within Alexandria, should they choose to stay.

In addition to the jobs and offers to live in Alexandria, Deanna gives the group two amazing homes to live in. Of course, because they are still skeptical of Deanna and Alexandria, the group decides to all jam into one living room, post-apocalyptic slumber party-style. While the group enjoys the amenities of a nice home, showers, electricity, and shaving (RIP Ricktatorship Beard), they still struggle with the nagging feeling that the Alexandria Safe Zone is too good to be true.

Nothing happens that is overtly awful. As in, we don’t get a peek into Deanna’s closet and find a collection of walker heads or a chained up zombie-daughter. Still, there are some smaller red flags throughout the episode. For instance, Rick meets one of his neighbors, a friendly, gorgeous woman named Samantha. Samantha offers to cut Rick’s hair (good riddance, Nasty Rick Grimes Mullet), and introduces Carl to her teenaged son. She understands Rick’s hesitance to trust Alexandria and its citizens, and she gives him the room to get comfortable.

Just as we think we’ve met a genuinely nice and good person in Alexandria, we meet her husband one night as Rick is taking a late-night walk. We don’t get much of Samantha’s husband, but we do see him smoking on his porch, in the dark. He calls out to Rick, and offers the most ominous, least sincere “Welcome to Alexandria” in the history of forever. So basically, it felt like the writers way of screaming in the least subtle way ever “RICK WILL TOTALLY HAVE TO KILL THIS MAN”

When some of the group goes on a “dry run” with the existing Alexandria scavenging team, things start out friendly enough. However, once they actually set out, the Alexandria crew discovers that a walker they strung up to use as target practice in a sort of misguided, weirdo sense of revenge, has wriggled free. Despite receiving strict instructions from the Alexandria scavenge team leader, Aiden (also Deanna’s son), Glenn kills the walker rather than capture it when it nearly takes a bite out of Tara. Of course, Aiden is not happy, and takes a swing at Glenn–who proceeds to knock Aiden out cold. Once again, the writers are screaming at us, “THIS GUY IS DEFINITELY GOING TO BE A BIG PROBLEM.”

Ultimately, this episode was about feeling out the group’s reaction to moving in to Alexandria, and, furthermore, feeling out the residents of Alexandria. The episode had the steady undertone of Deanna’s taped interviews with each group member, and it really helped kick up the stakes a bit. It was clear that the group needed to get off the road; but if there’s one thing that the group learned from being on the road for so long, it was that nothing in this world can be trusted anymore, so you have to stay on guard. Settling down could make the group weak, or it could make them victims of yet another creepy little town.

Honestly, it’s hard to get a read on Alexandria, mainly because every time something positive happens, it seems to be tempered with something negative. Alexandria introduces us to a great new leader, but she has a son who is completely awful. Rick meets a nice neighbor, but she has a creepy, night-smoking, vaguely threatening husband. The group gets a bunch of great new jobs and some stability, but the ever-present threat of “becoming weak” makes the group fear settling down. I really want Alexandria to work out for the group, but I am really concerned about what is lurking in the shadows of the “Safe Zone”.

What did you think of this week’s episode? Are you as concerned about Alexandria as I am? Do you think the group made the right choice by staying? let me know in the comments!