The Walking Dead Recap: “No Sanctuary” 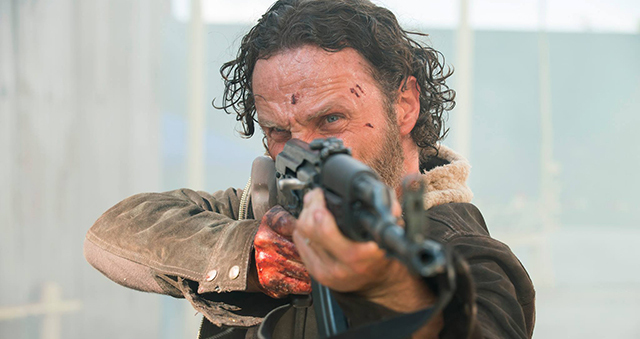 This is how you do a season premiere, kids. The Walking Dead is back with a serious bang!

We ended last season with most of Team Prison trapped in a boxcar on Terminus, Rick filled with a strange sense of strength and hubris, saying Terminus’ friendly neighborhood cannibals were “screwing with the wrong people.” I’ll be honest, while I was certainly rooting for Rick and the gang to get out of Terminus, I really had no idea how they were going to get out. I figured they’d escape somehow, but there would be serious casualties, and it certainly wouldn’t leave Terminus feeling regret over capturing Rick and his pals. The pictures circulating of Glenn seemingly moments away from death only doubled these feelings. 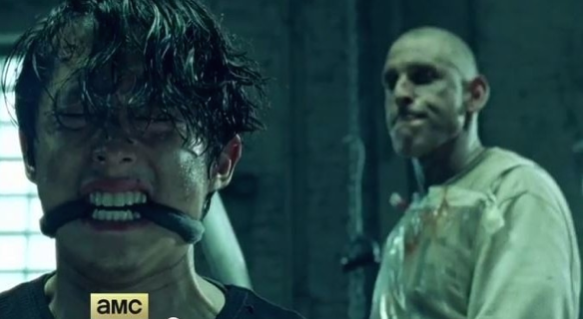 Sure, maybe some combination of Rick, Daryl, and Carl would get away, and maybe they’d take some of Terminus out with them, but the group would have to suffer such serious losses that it would hardly live up to the “they’re screwing with the wrong people” sentiment.

Suffice it to say, I was wrong.

Before I jump into that, let’s talk about Terminus. In the premiere we learn a bit about the backstory of this “sanctuary.” Mainly what we find out is that those running Terminus at the time of Rick’s capture used to be prisoners there. The old head honchos used to hold their prisoners in boxcars and take them out only to beat, torture, rape, and generally abuse them. So while we don’t see how the power shifted in Terminus, the creepy candle room filled with names that says “We First Always,” “Never Trust,” and “Never Again” on the wall makes a bit more sense. That room is clearly a remembrance of that time and of those they lost. 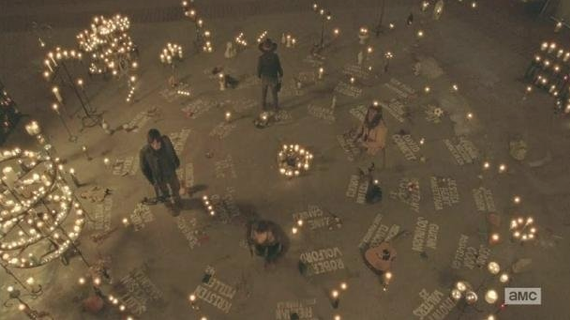 So we get their tragic backstory, but at the end of the day, Terminus is still run by a bunch of murderous cannibals, amirite?

The episode starts with Rick, Daryl, and Glenn (and a few “Red Shirts”) being taken to a slaughterhouse to be killed and then, you know, eaten. Probably. Just as Glenn is about to be killed, the Termite butcher is stopped at the sound of gunshots and a massive explosion. The cause of the explosion turns out to be this episode’s all-around hero, Carol.

Carol and Tyrese (and Judith, of course) are still heading to Terminus. Carol lets Tyrese know that she’ll make sure Ty and Judith get settled in, but she doesn’t plan to stay. That’s when they stumble across a Termite in the woods talking about a “girl with a sword” and a “boy in a hat.” Obviously, Carol and Ty are interested in this, so Tyrese watches the wayward Termite while Carol goes to investigate Terminus. Of course, when I say she goes to “investigate,” I mean she covers herself in walker guts (to allow her to travel among walkers undetected), finds Terminus, sees her friends, and then blows a giant hole in the place to free them without missing a beat. 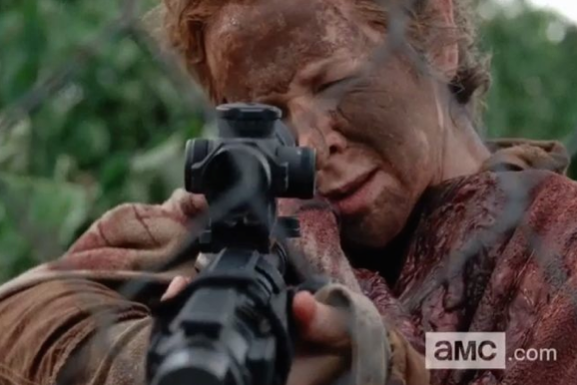 I know Carol had a bit of a downfall after she set those people on fire in the prison trying to stave off infection, but can we all just agree that this woman is completely badass? She’s grown so much since we first met her in season one. She is quick and clever in a crisis, and she never backs down. Carol for President.

Okay, so Carol is amazing. I could talk about just her for an entire post, so let’s move on. Once Rick, Glenn, and Daryl are free, they get the rest of their friends from the boxcar and essentially let the walkers overrun Terminus. In a bit of dark poetic justice, they let the Terminus cannibals die by being eaten alive. There’s even a super-graphic shot of a Termite literally having his face eaten by a walker. The whole thing is a gruesome, bloody affair, but all of the main Terminus players get taken out, friendly-faced Mary included. When Carol comes across Mary—you might remember her as the woman barbecuing some unidentified meat (*shudder*) in our first introduction to Terminus—

…Carol shoots her in the leg, then leaves her for the walkers.

Luckily, they don’t end the episode with all of that blood. Nearly the entire group gets back together (still missing Beth). Carol and Daryl share a long, meaningful hug (I still ship it, I can’t help it), and Carl and Rick get reunited with everyone’s favorite Ass-Kicker, Judith. Together again, they leave. Rick covers up the part of a Terminus sign that promises hope at the camp and changes the sign to read “No Sanctuary.”

That’s it. One episode, and Terminus is wiped out. If you tuned in to The Talking Dead with Chris Hardwick after the episode, you’ll know that we’ll still be getting some flashbacks of Terminus and its history, but the Terminus threat is officially neutralized. Of course there is still a ton of danger out there, but I was heading into this season assuming Terminus would be the new Big Bad, the new Governor. I guess not. We will have to see what the rest of the season holds, but if it’s anything like the premiere, it looks like it’s going to be crazy.

What did you think of the premiere? Did I miss your favorite moment? Let me know in the comments.