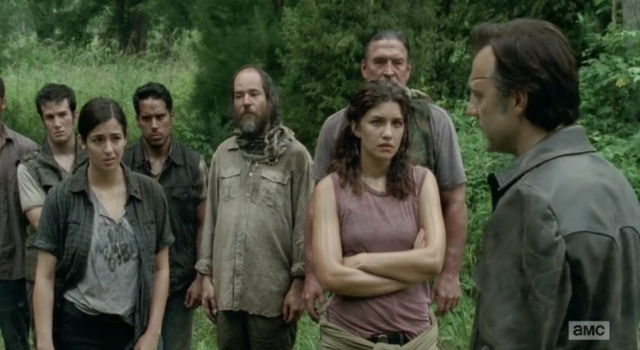 I understand that something happened on The Walking Dead last night and you might want a recap and a place to discuss it and so we offer you this one written by Geekosystem‘s own Victoria, and our comments section.

Last time on The Walking Dead: the Governor has a new set of pawns (get it because CHESS and SYMBOLISM) to go throw at the characters we actually care about. Except Carol, of course. Miss u, boo.

“I have to talk all of you into doing something,” the Governor is saying to his  camp. Specifically, he has to talk them into waging war against the prison so  they can take over the land. But why wouldn’t they just ask to share? Because the Governor pins that raided camp on the prison gang so all his new recruits can feel like they have the moral high ground. Except they kinda don’t, because the Governor totally already captured Michonne and Hershel. Tara is initially unimpressed, it’s worth noting.

The Governor thinks he can pull this off without actually killing anyone. Sure, that’s cute. Of course he’s only saying that to appease his people, and as the credits roll in, he all but confirms this by saying that they do need to be prepared to kill people. After all, most of them are totally horrible thieves and murderers, which the Governor would totally know — he met them at the last place he lived, and they burned his camp, poked his eye out, and killed his daughter. He neglects to mention that his daughter was already kinda dead at the time and also he was a raging psychopath, but you know how those little details sometimes get lost in the retelling. Everybody’s done that, right?

I’ll say this though: the governor is really good at making speeches. Heck, I was almost kind of rooting for this stupid non-Michonne camp for a second.