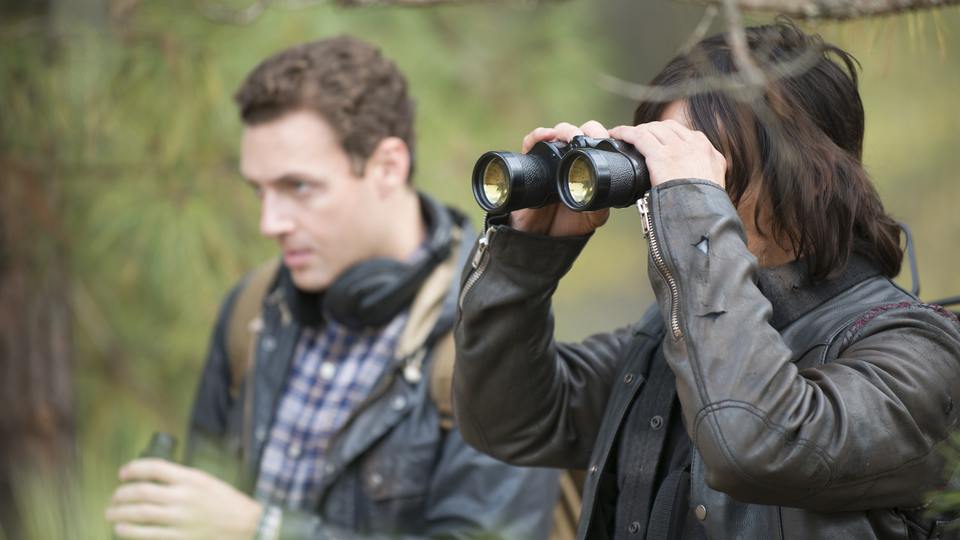 There will be spoilers ahead! Read on at your own risk!

Well, we have officially closed the book on season 5 of The Walking Dead, and the 90-minute finale proved to be every bit as explosive and exciting as we all hoped. Let’s talk about the episode.

One of the central conflicts in this episode revolves along Rick and Deanna’s decision to either exile Rick (and likely the rest of his group), or to allow him to stay in Alexandria. The rest of the group is frustrated that Rick would keep secrets from them, and they are frustrated that he hasn’t fully seemed to have bought into the idea of moving into an actual home. While they plead with Rick to try to reason with the Alexandrians, Rick begins to hatch a plan to ensure that Deanna’s town forum to discuss Rick will only end positively for him. However, Michonne encourages him to take the Shane down a few notches to allow the forum to run its course without initiating any sort of a shootout. He spends a good portion of the episode chewing on his plans for the forum, which we’ll talk more about later.

While the Rick exile is huge, I think the biggest thing to come out of this episode is the confirmation to comic book fans that, yes, the people behind the horrors in the woods and walkers with a “W” marking on them are indeed the Wolves. We know this because a member of the Wolves comes face to face–finally–with Morgan. It only took us an entire season, but finally we got some actual time with Morgan rather than a few shots of Morgan staring pensively off into the void.

The Wolves intend to take everything from Morgan, including his life, but Morgan is not okay with dying at the hands of a roving, masochistic gang. When a member of the gang tries to jump Morgan from behind, we get the biggest surprise of the episode–between the episode “Clear” and now, Morgan has managed to learn some pretty amazing fighting skills. Using only a pole, Morgan is able to take out the two Wolves, and is able to continue on his way.

So, to sum up, the W-marked, body chopping, murderous gang roving around the woods are indeed the Wolves. They are super dangerous killers, and Morgan is now a badass fighter–though we’re still unclear on what exactly it is Morgan is searching for or travelling toward. As Morgan is out and about, he happens to run into Aaron and Daryl, who are pinned in a car after being caught in a crazy elaborate trap set up by the Wolves. Morgan frees them, and Aaron invites Morgan to head back to Alexandria with them…

Back in Alexandria, Glenn is still struggling with everything that’s happened, from Noah’s death to Rick’s potential exile. Maggie is working overtime, speaking to members of the town and trying to reason with Deanna, but you can tell that Glenn feels a bit helpless; that is, until he notices Nicholas trying to climb over the wall. Slightly worried that Nicholas will get himself killed, Glenn decides to follow Nicholas out of the city.

Things escalate pretty quickly once Glenn hops the wall. Nicholas shoots Glenn, but Glenn springs back to his feet and beats the snot out of Nicholas. A group of walkers nearly overtake the two of them, Nicholas runs away (shocker), and Glenn appears to be overtaken–but then Glenn attacks again, nearly shooting Nicholas in the head. Of course Glenn spares Nicholas, since Glenn is super good and moral, but he gets quite close.

Back in Alexandria, Father Gabriel is still struggling, and he attempts to go out into the wilderness to kill himself. He only stops when he notices the walker to whom he is is about to surrender himself has a broken noose around his neck. Seeing his future self in that walker, Father Gabriel kills the walkers nearby and breaks down in the street. He returns to Alexandria, leaves the city gate open, and proceeds to return to his church. Sasha is waiting for him there, and when she asks him for help, he chooses not to help her and instead upsets and provokes her until she pulls a gun on him.

While Maggie ends up calming Sasha down and urging the priest to keep fighting, a few walkers amble their way into the city through the gate Gabriel left open. As he’s on his way to the forum, Rick comes across the open gate, notices a blood trail, and follows the blood to see who (or what) is bleeding. He manages to track down the walkers and kill them (in one case, he literally pops the head of one of the walkers–look it up, it was crazy gross). After he is sure the city is walker-free, Rick brings one of the  walker corpses to the forum. He explains that this breach happened because the town was lax on securing the gates, and because there wasn’t a guard stationed in the tower. He promises the Alexandrians that he will help them become strong enough to survive in this new world, and he also promises that he wouldn’t threaten or kill any of them–as he originally had planned–to try and convince them to side with him.

Just as things are going well and the town is starting to believe Rick, a drunken Pete stumbles into the forum. Though Deanna had him moved to another home away from Jessie, Pete snapped after he was offered a casserole with heaping helpings of Carol-threats and finding Rick and Jessie sharing yet another tender moment together. He barges into the forum wielding Michonne’s katana, shouting that Rick isn’t “one of them.” When Deanna’s husband tries to calm Pete down, the katana slashes Deanna’s husband’s throat. After taking a few minutes to try in vain to save her husband, Deanna tells Rick to shoot Pete. Without hesitating for even a moment, Rick follows through.

It is, of course, at that very moment that Aaron and Daryl return with Morgan–the same man who, earlier, explained his reasoning for saving Aaron and Daryl, two strangers, saying “all life is precious.” Morgan is still carrying around the map with Abraham’s note on it, so it is clear that Morgan still very much remembers Rick, and probably pictured stumbling upon a far less bloody, murder-y version of Rick. It will be incredibly interesting to see how Rick and Morgan’s relationship will change after Morgan saw Rick take the life of a human.

The important thing to remember from this episode is that Rick chooses Alexandria. He decides that he can stay strong–and that he can make Alexandria strong–while still giving Judith and Carl a real home in which to grow up. He’s quite rough around the edges, but ultimately Rick isn’t the Governor. His main concern is survival, not power-grasping, and if he can help Alexandria become better, then staying is no longer a bad choice for him and the group.

Deanna also seems to be hardening up a bit–which makes sense since she’s lost her son and husband in the same month. I took her decision to let Rick kill Pete as a bit more than just a knee-jerk reaction to severe loss and pain. I think she’s also starting to see the evils waiting right outside her door, and how Rick can help them stay safe. Giving the order to kill Pete seems to be a step in that direction.

While we did get a brief look at the Wolves and a few of their members, we didn’t get a real close-up of the whole gang; however, the episode ended with the Wolves looking through the photos Aaron took of Rick’s group as he was scouting them, so I think it is safe to say that the Wolves will be paying Alexandria a visit very soon. We’ll just have to see if they last longer than the Termites did. Regardless of how long they last, let’s hope their dietary preferences are a bit more… conventional than Terminus’.

The group is still continuing to evolve, and their decision to live in Alexandria and teach the residents could signal either a great new chapter or an awful one. Either the group will be made stronger by these attempts to educate Alexandrians, or dealing with “children,” as Carol called them, will drive the group away from the safety they hoped to find in civilized life in the Safe Zone. It will also be very interesting to see what role Morgan will play in all of this.

What did you think of the finale? Do you think the group is making the right choice by staying and teaching Alexandria? Do you think Morgan will be okay with Rick despite seeing Rick shoot Pete? If you were Glenn, would you have killed Nicholas? Let me know your thoughts about this and anything else from this season in the comments!