The Unnecessary Heterosexuality of Jupiter Ascending 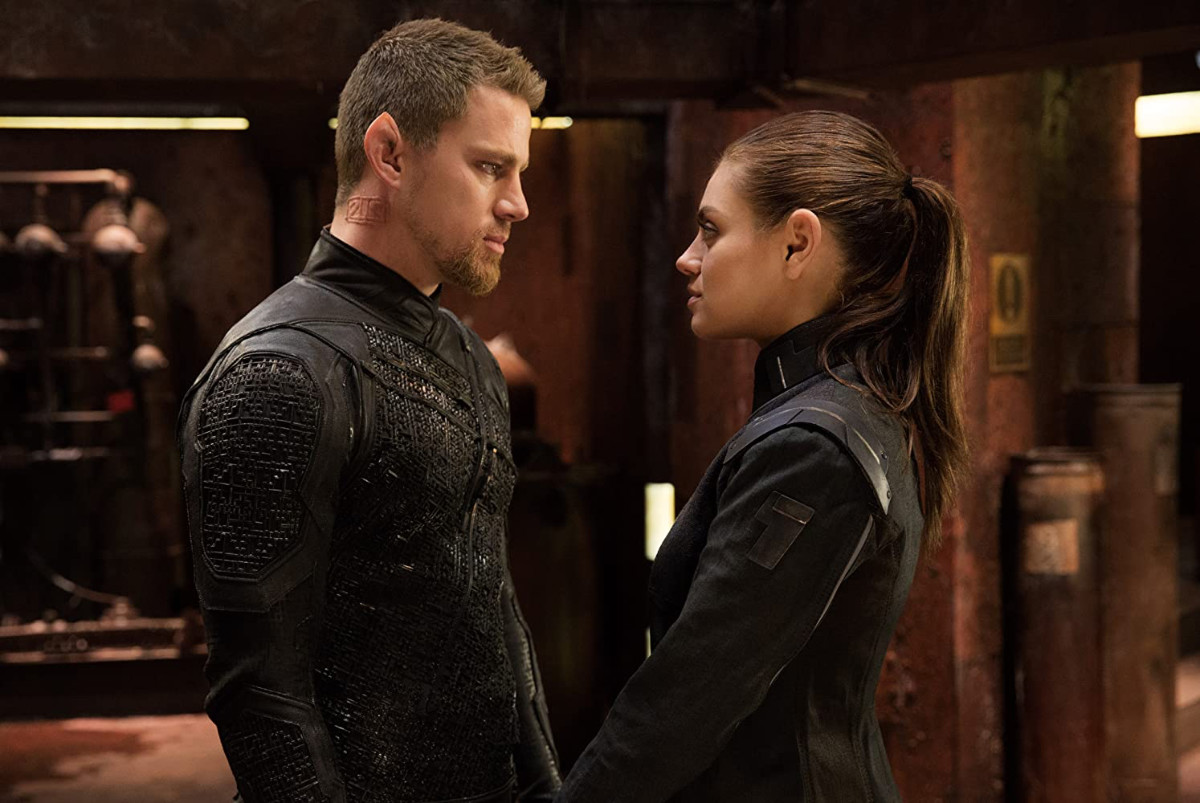 Over the long weekend, I watched the Wachowskis’ 2015 space opera Jupiter Ascending fully for the first time. Jupiter Ascending has always gotten a mixed reaction from audiences. In a lot of the queer and female spaces, it is quite beloved despite the messy aspects of it, and upon giving it a proper watch, I could see why.

The film has majesty and an almost fairytale-like narrative journey. Jupiter Jones (Mila Kunis) has the name of a comic book character, played by Hollywood’s favorite cool girl. She has elements of Cinderella, the Chosen One, and an action heroine rolled into one, with her love interest being the wolf-human hybrid warrior Caine Wise (Channing Tatum). However, somehow, it is the relationship between Jupiter and Caine that stands out as the most ridiculous aspect of the film.

And yes, I am putting that over the scene with the bees.

Jupiter Ascending is about a young, undocumented Russian immigrant named Jupiter Jones who happens to be the reincarnation of the matriarch of a royal alien family made up of three shitty kids: Balem, Kalique, and Titus, who form the House of Abrasax. The former queen wrote her future self into her will, which makes Jupiter the legal owner of Earth. Balem is very whispercore unhappy about this and wants Jupiter to be killed in order to prevent her from attaining the title because Earth is super financially important to the alien world. Naturally.

However, Caine Wise was hired by hot son Titus to grab Jupiter instead. Bees indicate that Jupiter is a queen, they go on a journey where each of the kids tries to emotionally manipulate Jupiter in some way, and eventually, it comes down to Balem v Jupiter for the future of the Earth. Amidst all of that, there is a love story between Jupiter and Caine that just feels tacked on because the characters have such flimsy connections to each other that it only serves to weaken them.

Writing a romance where two people who have never met fall in love amidst planetary turmoil and stop a potential genocide is hard, but it can be done. But that requires the movie slowing down to actually let the characters talk about themselves, allow their commonalities to show, and let whatever chemistry got them cast together in a screen test shine. Nothing about why these two were cast opposite each other works. Kunis is a good actress and she throws out all the smolder at Tatum, but he is not picking it up at all. Tatum has proven himself to be a much better comedic actor than a serious action star, which has actually probably given him a much longer-lasting presence in Hollywood.

Even if the two did have good chemistry, the writing just never establishes a reason for the attraction beyond … Jupiter loves dogs. I mean, yes, Caine Wise is cool, but Mila Kunis is Mila Kunis, and I’m never gonna believe she is struggling to get a date, janitor or no.

When the Wachowskis have talked about Jupiter Ascending, they’ve said that, with Jupiter, she was supposed to be a space opera version of Dorothy from The Wizard of Oz.

I guess this makes Caine the human(ish) version of Toto, but at least Dorothy and Toto have a pre-established bond before she gets sucked into Oz. More than anything, the lack of any believable bond is the issue that stood out to me with Jupiter and Caine. They have one quiet conversation before all of a sudden Jupiter is in love with him, and it’s reciprocated.

It would have made 1000x more sense if Caine’s character had some real attachment to the previous version of Jupiter, the Abrasax matriarch. Maybe he was the person who was supposed to protect the Queen and therefore took on this mission out of a sense of responsibility. Maybe they were lovers, and this is like remaking the reincarnation/dog-boy romance of InuYasha. But the only character Caine has a relationship with is Sean Bean’s Stinger Apini, which, you know … I’d ship that.

I actually really enjoyed Jupiter Ascending. I loved the style of it, and the fight scenes were impeccable, with us actually being able to see everything that was happening because it wasn’t just endless grey. I also loved the world-building and characters. This is a world that I would love to see expanded into a television series where Jupiter is still the ruler of Earth and has to deal with the remaining Abrasax siblings. But the thing that really took me out of the movie was how weak the bond was between Jupiter and Caine, which brings the movie down because we are supposed to be invested in them.

One thing I will say is that some of the scenes in this movie are so superb that it just reminds me that the Wachowskis do make some mistakes along the road, but when it comes to concept art and visual effects, they are ahead the curve.