The Tom and Jerry Movie Trailer Dropped and I? Like It?!

Is this a genuine smile on my face?

So … I feel like I’m breaking some kind of nostalgia kids code by not lamenting on how a new version of a classic cartoon is ruining my childhood. But, well, I dunno I can watch the classic version whenever? And … well … this trailer for the new Tom & Jerry movie doesn’t look bad at all?

No, no question mark, it actually does look entertaining!

First of all, I didn’t even know this movie was a thing, so when it came across my timeline I was surprised and, honestly, a bit intrigued. Maybe I have more hope after Sonic the Hedgehog about how beloved characters are integrated into our world because, yeah, I really liked that movie!

Unlike Sonic (and a lot of these “animated character meets humans” stories) it looks like the cartoon cat and mouse are just… accepted as a thing. There’s this sort of Who Framed Roger Rabbit vibe because toons are interacting with humans in scenes like it’s no big deal. There’s an extravagant wedding being planned with animated elephants? And that’s fine? Cool, I’m game. Maybe cartoon elephants are easier to control for elaborate weddings?

From what I can gather from the trailer, Tom and Jerry (who don’t speak, at all, unlike the first movie I ever saw them in) are going their separate ways. However, their paths cross again when Chloë Grace Moretz takes on the task of ridding the elegant hotel she works at of its rodent problem before the super important wedding they’re coordinating.

Now see, if it were me? I wouldn’t wanna deal with a sassy mouse like Jerry, so I’d let him enjoy his soak in the tub and deliver him some cheese to keep him under control during the wedding.

Instead, Tom is brought in to deal with Jerry, cuz movie gotta movie.

Protip: if the mouse you’re trying to catch is the type to xerox pictures of himself to bother you? Just negotiate with him, don’t try and catch him.

Unfortunately, Chloë and the rest of the hotel don’t know the history these two have with one another so major hijinks ensue in the trailer as Lizzo’s Juice sets the tone. It’s actually a perfect song if you think about it. When older franchises get remade for today’s generation there’s always a hit song to accompany it, and the chorus of “it ain’t my fault” works for Jerry, who’s just trying to live his best life. 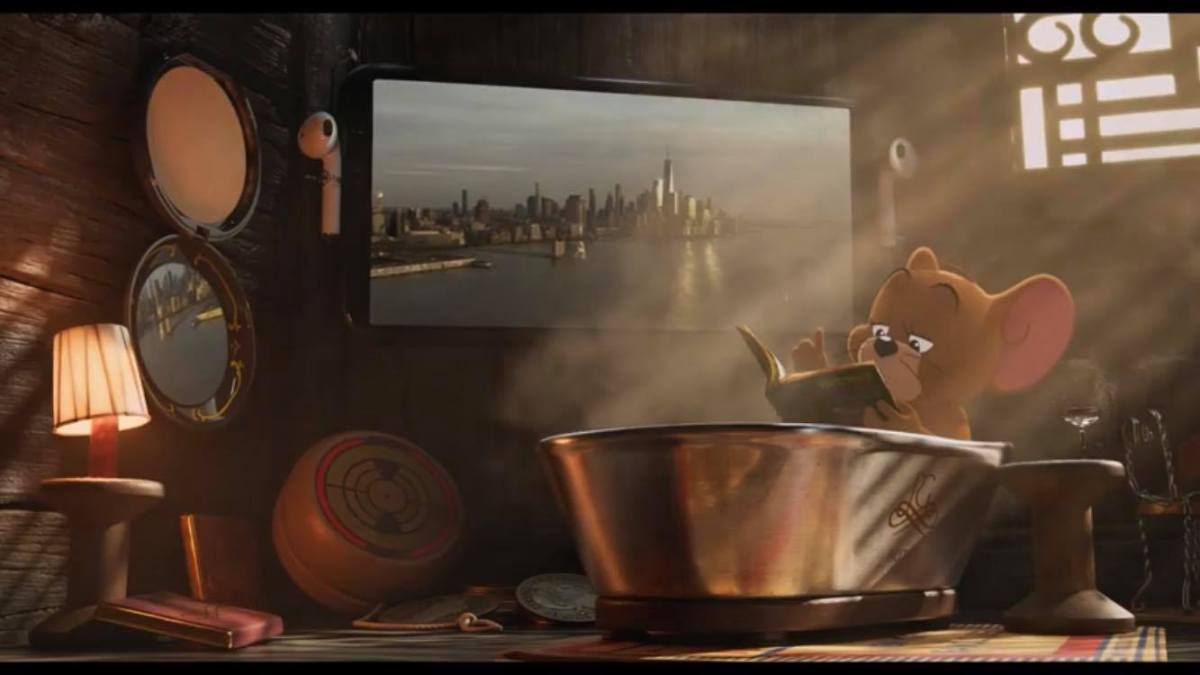 What I like most about the trailer is the chaos of it. Tom and Jerry are known for utter destruction and it looks like that’s what we’re in for, not just to the hotel, but to each other. Tom’s fingers get crushed by a bowling ball. Tom gets electrocuted. There’s a cake battle between Jerry and Ken Jeong. Michael Peña will, hopefully, have another Ant-Man influenced recap monologue.

I mean yeah, I can nitpick the fact that Tom’s screams don’t blow out my headphones, but as far as first impressions … I’m kinda digging this. I like that there’s still slapstick. I like that the humans just roll with the fact that there’s a cartoon cat and mouse chase to deal with. I like that the comedy comes from the two of them interacting with each other and not the humans, gasp, discovering this bizarre, animated creature for the first time. I’m sure there will be plenty of laughs at the expense of, well, everyone who has to deal with their nonsense, but for the most part, it looks like our two main characters will be exactly who the movie is named after: Tom and Jerry.

Please, don’t let all the best scenes be the ones from the trailer.

Please, don’t let there be some overly complicated plot and just let it be “protect the wedding from these two disasters.”

I’m curious to see if any other series staples return. I’ve always been fond of Jerry’s “never skip leg day” cousin, Muscles, and Spike the bulldog has always been a good (and intimidating) boy. Will Tom and Jerry be the only animated rascals to deal with, or are we gonna amp up the wacky and invite more to the party? Guess we’ll find out in March, which is the projected release for this film.