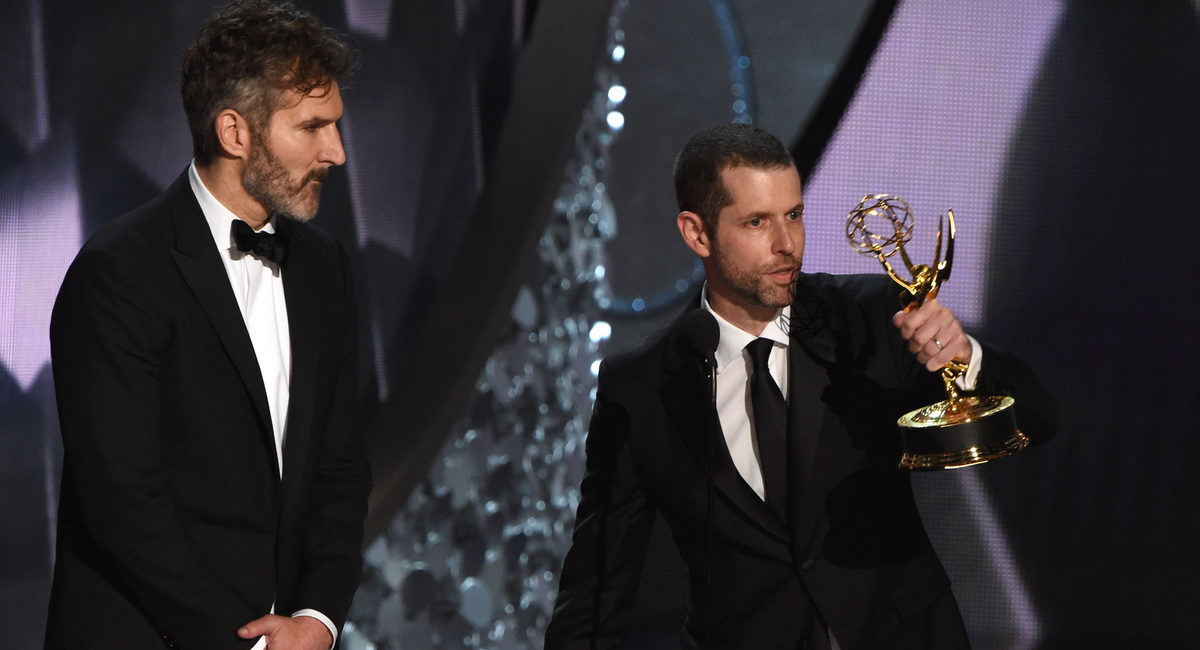 After ending Game of Thrones to near-universal disappointment, losing out on making a Star War, and blessedly ending their Confederate project, David Benioff and D.B. Weiss have at last settled on their next project. Unsurprisingly for them, it sounds epic and ambitious … with the potential for some big racial missteps.

The project is The Three-Body Problem, an alien invasion epic, coming to Netflix. The series is based on the Remembrance of Earth’s Past, the internationally bestselling science fiction novels by Chinese author Liu Cixin. The books tell the story of humanity’s first contact with an alien race, and in announcing the project Netflix VP of Original Series Peter Friedlander explained:

Although it may seem like a familiar premise – the story of humanity’s first contact with an alien civilization – Chinese author Liu Cixin’s ability to interweave science with fiction made his vision of the future and extra-terrestrial contact feel more realistic than any other science fiction I’ve read. At the same time, I was also drawn in by the story of all of humanity vulnerable to the same external threat and how this both unifies and divides humans.

Along with D&D, the project boasts some impressive talents, including Rian Johnson as an executive producer, but most importantly Alexander Woo, a veteran of True Blood and The Terror, as a co-writer and executive producer. I’m incredibly happy the Woo is on this project—otherwise, I would be even warier of Weiss and Benioff handling a property from an Asian author with a mainly Chinese cast. The book only has two white characters.

While of course, it’s not unheard of for white, Western creators to work on a project from Asia, we’re in a very delicate moment right now when it comes to race and representation, and I can’t help but cringe a bit that Weiss and Benioff—who handled race and racism so hamhandedly on Game of Thrones—are now going to be steering the ship on an adaptation of a major non-white work.

Along with Woo, there are other Asian creatives on the team. Cixin will be a consulting producer alongside Ken Liu, who wrote the English translation for The Three-Body Problem and Death’s End (the second book in the trilogy). According to Netflix, “having Cixin and Ken involved will help ensure that the spirit of the books remains intact.”

For their part, Weiss and Benioff do sound extremely committed in the press release to the project, which sounds very complex and interesting as well. “Liu Cixin’s trilogy is the most ambitious science-fiction series we’ve read, taking readers on a journey from the 1960s until the end of time, from life on our pale blue dot to the distant fringes of the universe,” Weiss and Benioff said in a statement. “We look forward to spending the next years of our lives bringing this to life for audiences around the world.”

Woo expressed his excitement to be on board: “It’s a privilege to be adapting one of the great masterpieces of Chinese science-fiction. The Three-Body Problem trilogy combines so many things I love: rich, multi-layered characters and true existential stakes – all told as an elegant and deeply human allegory. I’m thrilled to kick off my partnership with Netflix with this accomplished creative team.”

Author Liu Cixin is listed as a consulting producer. Cixin said: “I have the greatest respect for and faith in the creative team adapting The Three-Body Problem for television audiences. I set out to tell a story that transcends time and the confines of nations, cultures and races; one that compels us to consider the fate of humankind as a whole. It is a great honor as an author to see this unique sci-fi concept travel and gain fandom across the globe and I am excited for new and existing fans all over the world to discover the story on Netflix.” Lin Qi, Chairman of the rights-holders, the Yoozoo Group, and The Three-Body Universe, and Zhao Jilong, Vice President of The Three-Body Universe, will also serve as executive producers.

This is one of those “we’ll have to see” announcement. This project has the potential to be really amazing and to serve as a huge step for Asian representation in science-fiction and genre. And Weiss and Benioff have shown that they can be good at television when they’re adapting a good book, but not so much when they’re working without source material to guide them, as in the final seasons of Thrones. So … we’ll have to see, indeed.