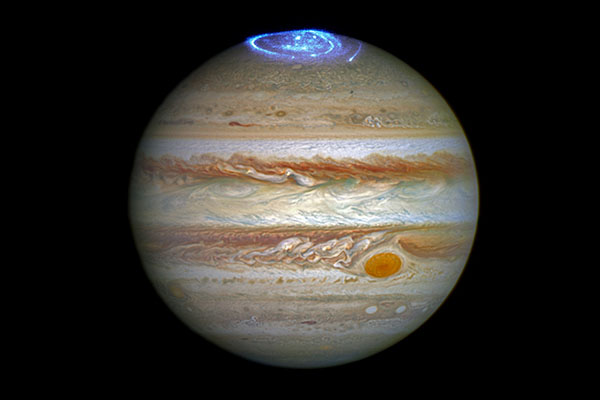 The Hubble Space Telescope has brought us no shortage of amazing imagery of the cosmos over the years, and it’s just had a contract renewal for another five years in service. Let’s all celebrate by looking at this amazing imagery it captured of Jupiter’s massive aurorae (animation here) as the Juno mission speeds towards the planet for a closer look—recently crossing Jupiter’s “bow shock.”

The aurorae may look like a tiny cap on the top of the planet, but in reality, Jupiter’s aurorae are bigger than our entire planet. They’re also much more energetically active than the ones here on Earth, but they aren’t as pretty as ours in the visual light spectrum. Jupiter’s are only visible as ultraviolet light, which is the spectrum Hubble initially imaged, and then scientists composited that data with a visible light picture of the planet. This ultraviolet light show was first discovered by Voyager 1 in 1979, and it’s constantly active as charged particles from the sun and Jupiter’s moons interact with its magnetosphere.

That magnetosphere extends far, far beyond just the planet and its aurorae, though. It’s the biggest, most powerful planetary magnetic field in our solar system, befitting a planet as large as Jupiter, and the Juno probe has recently crossed into it during its final approach to the planet. If it were visible, it would appear twice the size of the full Moon to viewers on Earth despite being much further away, according to William Kurth of the University of Iowa in Iowa City, a scientist involved in the Juno mission.

Thanks to NASA, you can listen to the oscillations Juno picked up as it crossed the bow shock of Jupiter’s magnetic field. Kurth added, “The bow shock is analogous to a sonic boom. The solar wind blows past all the planets at a speed of about a million miles per hour, and where it hits an obstacle, there’s all this turbulence.” Juno will receive commands later today to initiate a sequence that will put it in orbit around Jupiter, including a 35-minute engine burn, and it will meet up with the planet on July 4.

For some less jarring Jovian sounds than the ones above, NASA and Apple are teaming up to get the public excited about the Juno mission (and probably about Apple Music) by encouraging artists to produce music inspired by Jupiter and the Juno mission. They’ve put up a documentary short on Juno with some of the Jupiter-inspired music scored by Trent Reznor and Atticus Ross, who also have a Jovian track up for download on iTunes or streaming on Apple music along with a bunch of other “Destination: Jupiter” music (including a track by Weezer).

[via New Scientist and Emily Lakdawalla on Twitter, image via NASA, ESA, and J. Nichols (University of Leicester)]