The Results of Our Hunger Games Contest! 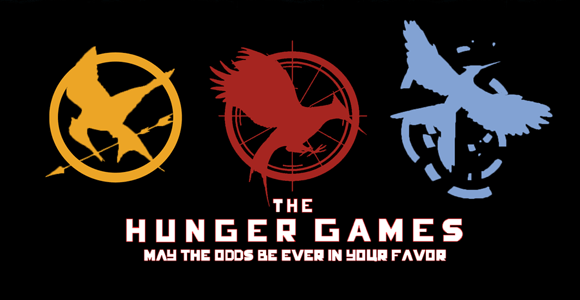 It’s doubtful that any arena match would last as long as it’s taken us to pick and contact the winners of our Hunger Games contest, but, hey, there are no peacekeepers making sure people check their Facebook messages, and that’s probably a good thing.

We asked entrants to tell us how they would die if they were tributes in the Games, and got many, many responses. The following are our five favorites of the several hundred entries.

Our two second runners up, are Phil:

I would last until about the third day in the arena, surviving off of fish I caught and fresh berries. Then, on the third night, I’d catch the trail of the boy from District 11 and begin to stalk him. When I’m within an arm’s reach of him, knife in hand, he would shout, “The Eleventh Doctor totally beats the Tenth Doctor! Arrested Development was overrated! Bring back Firefly!” Like an arrow through my heart, I fall desperately in love with this boy I’ve only just met. And in my moment of weakness, I actually get an arrow through the heart, courtesy of his ally in the trees. Curse my geeky love!

They’ll be getting one each of these two posters, courtesy of Mammoth Advertising:

Our two first runners up are Eleni:

I think I would last a little while–8 years in the Army and two deployments didn’t teach me nothing–but, like some of the above commenters, I think I would be dispatched by refusing to eat disgusting things. When I was in boot camp, I would eat nothing for days in the field but packets of peanut butter, and I don’t think I would find many of those in the games.

Flash “DOWN WITH THE CAPITOL” mockingjay derriere tattoo. Receive gift of food, including hams and buns, from sponsor for sheer ‘cheek.’ Choke on ham sandwich.

They’ll get both of the above posters, and a copy of The Girl Who Was on Fire – Movie Edition, courtesy of BenBella Books:

And finally, our grand prize winner is Paige:

I have only one talent: hula-hooping. Normally, that wouldn’t be any use in the arena, but, as we know, the Game Makers are a twisted bunch. When the game starts I’ll spot a Atomic Laser Hula-Hoop 3000 in the Cornucopia. This strange, Capitol weapon can take out a dozen opponents with a mere swing of my hips. I’ll run towards the Cornucopia, forgetting about the much stronger Tributes who are hot on my heels. I’ll make it to the hula-hoop, but not before taking a knife to the back. I’ll have just enough strength to use the hula-hoop once, taking out half of the other Tributes and the entire Cornucopia with me in a fiery blast of hula-hooping glory.

Paige gets all of the above, the following poster:

and a copy of The Unofficial Hunger Games Cookbook: From Lamb Stew to “Groosling” from Adams Media!

Contratuations to all our winners! And speaking of winners, we will be contacting the winners of our Birthday Logo contest soon (you chose Hermione), but, as we learned from this contest: it’s really hard to get people to answer their Facebook messages. So if you voted in that contest, be on the look out for a message from one TheMary Sue. If you know somebody who voted in that contest, tell them too.