Review: Go Ahead, Turn Off Your Brain and Enjoy The Prom 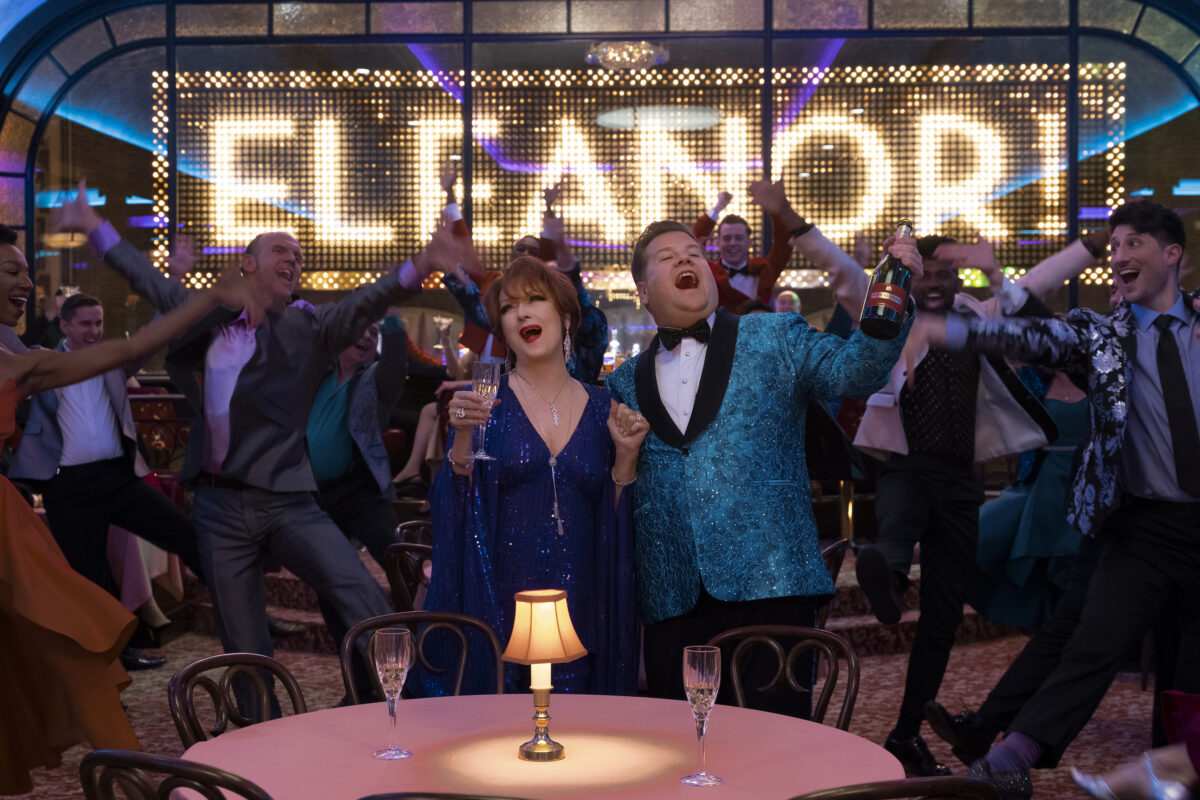 Here’s the thing: if you’ve seen the trailer (or even the poster), you’ll quickly surmise whether or not The Prom is for you. Ryan Murphy’s star-studded musical extravaganza, adapted for Netflix from the hit Broadway play by Matthew Sklar, Chad Beguelin, and Bob Martin, wears its theater kid heart on its sleeve, with enough glitter and jazz hands to fuel the Macy’s Thanksgiving Day Parade. For some, it’s a rousing call for equality and tolerance. And for others, it’s a 2 hour 12 minute journey to the heart of darkness. Your mileage may vary!

The film follows Broadway stars Dee Dee Allen (Meryl Streep) and Barry Glickman (James Corden), who are fresh off of their flop musical Eleanor!, about the life of Eleanor Roosevelt. Looking for some positive publicity, the duo catch wind of a viral news story about small town lesbian teen Emma Nolan (Jo Ellen Pellman, in her film debut) who wants to take her girlfriend to prom. In response, the homophobic head of the PTA Mrs. Greene (Kerry Washington) cancels the prom for everyone, despite the protestations of empathetic Principal Hawkins (Keegan-Michael Key).

Dee Dee and Barry pack their bags and head off to Indiana to save the prom, accompanied by boozy chorus girl Angie (Nicole Kidman) and Juilliard-trained actor turned bartender Trent (Andrew Rannells). Once the Broadway folk turn up in Indiana, there’s a culture clash between the worldly performers and the Midwesterners.

As someone who loves musicals, I was excited for The Prom. And in the first half of the film, I was charmed and amused by the bombastic performances, the catchy tunes, and the more than game cast. Everyone seems to be having a blast, and the film bounces along on its high energy ride and enthusiasm. Director/media giant Ryan Murphy leans heavily on his Glee experience to deliver joyful musical moments and over-the-top characters.

But like most Ryan Murphy vehicles, The Prom soon overstays its welcome. The film pivots from snarky self-awareness to sincere tear-jerking moments on a dime; big emotional shifts that may work on stage but don’t quite translate to the small screen. With too many subplots and a lack of focus, many of The Prom‘s character turns are unearned and ring false. In classic Murphy fashion, the film overdoses on sparkle and star power to overcome the inconsistencies in its story and characters.

In an unintentional meta-commentary on the self-absorption of the Broadway folk, Emma’s story quickly falls by the wayside. I would have much rather spent more time with Emma and her grandmother (Mary Kay Place) than explore the sad backstories of Barry and Dee Dee. Jo Ellen Pellman, who holds her own alongside her superstar castmates, delivers a warm and winning performance that had me wanting to see more of her story instead of Corden’s.

Much has been made of the controversy around the straight James Corden playing a flamboyantly gay character. Many believe the role should have gone to an out actor, with some even likening Corden’s performance to “gayface”. It’s a compelling point with good arguments on both sides. As a queer person myself, I was not offended by Corden’s performance. I wasn’t blown away by it either. It’s fine. But I can’t help but feel that someone like Nathan Lane or Brooks Ashmanskas (who originated the role on Broadway) would have leant more authenticity to the role. It’s a puzzling casting choice from Murphy, who frequently works with out actors in out roles.

But despite its shortcomings, The Prom has its winning moments. Andrew Rannells delivers a show-stopping performance in the pro-gay anthem “Love Thy Neighbor”, and Nicole Kidman is clearly having a blast channeling her inner Fosse girl in “Zazz”. Everyone seems to be having a blast, and while the film drags in parts, overall it’s a a fizzy romp that goes down smoothly.

Like I said, you already know whether or not The Prom is for you. If a dancing Nicole Kidman enthusiastically playing a cowbell is extremely your shit, you won’t be disappointed. If it’s not, well, there’s plenty of content on Netflix for you completely free of jazz hands.