The Novelist Puts Family’s Fate In The Player’s Hands

There are some things about me you should know going into this.

I love stealth games. A lot.

Non-violent adventure games are one of my favorite ways to relax.

I spend a lot of time thinking about the co-existence of my writing and my family. I sometimes struggle with finding a good balance between throwing myself into a project and nurturing the relationships I care about. I worry that my writing will suffer if I dedicate too little time to it. I worry about alienating those around me if I do the opposite. I worry that if I don’t put enough time into my writing, I won’t secure enough paying work, and I’ll make things that much harder for those I share a home with. When questions of kids and future arise, I am all the more concerned that I won’t be able to find harmony. In those moments, I ask myself if this is what I want to do with the rest of my life.

At the intersection of these things, you will find The Novelist.

The game centers on the Kaplan family — Dan, Linda, and little Tommy — as they spend a summer together, all quietly suffering. Dan, the novelist in question, is battling writer’s block. His advance has been paid and his publisher is waiting, but the book isn’t working out. If he doesn’t finish this one, he may never do another. Linda, meanwhile, is trying to rekindle her painting career, and has doubts about her future with Dan. She knows that this trip is the last chance for their marriage. Tommy’s wishes are less complicated, but perhaps the most important of all: more friends, fewer bullies, and a father who pays attention to him.

As is so commonly the case, the Kaplans never communicate their needs to one another. They wander past each other in their scenic vacation home, hoping someone will pick up on the things they want. That someone is the player, who, in a wonderful twist, is physically present alongside them. Your role is unstated, but your abilities suggest something ghostly, something that has been in the house much longer than its current tenants. You can possess lamps, jumping unseen from light source to light source. You can make the lights flicker, to lure people out of rooms. If you sneak in close enough, you can inhabit the minds of others, exploring their memories and reading their thoughts. The goal is to observe the Kaplans without being noticed. Once you have discovered what they want, you have the power to help. As the Kaplans sleep, the player must approach Dan and whisper to him what the best use of his time is. Should he play with his lonely son? Should he get a bottle of wine and spend the evening with Linda? Or should he go looking for his lost notebook and rewrite that scene his publisher’s waiting for?

Here’s the kicker: You only get to choose one. 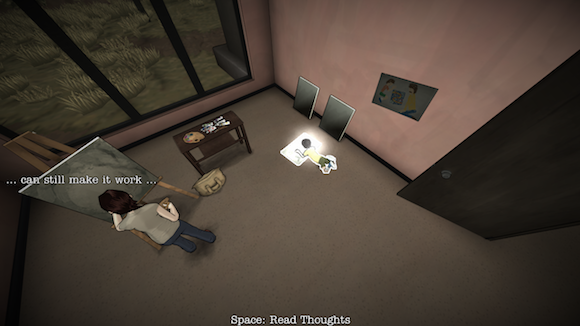 If the player successfully scouts out the Kaplans without being seen (because oh yes, they can see you), you have the option to compromise. Dan may not be able to spend the whole afternoon playing with Tommy, but he could get in a couple rounds of a boardgame. Or he could spend the evening with Linda, but still squeeze in a bit of writing time. Not much, but it’s something. Compromises can only be chosen for one family member per day, meaning someone is always left out. There is no way to make everyone happy. And if one of the Kaplans does see you, their resulting jitters prevent you from being able to choose their compromise. You only have influence if they don’t know you’re there.

I tried. I really did. I wanted Linda to have her career, and I wanted Tommy to make friends, and I wanted Dan to feel good about that day’s work, because I know how stabbingly awful it is to hate every word you write down. I understood the pressure he felt to make something good, but I also knew that success would feel hollow if, down the road, he found himself alone. But then, if he put his family first, if he chose companionship over career, would it always haunt him? Would he always feel a little incomplete, a little regretful of setting his work aside? Would the question of “what if?” gnaw at him for the rest of his life? Would he feel exactly the same way if he prioritized his career instead — incomplete, regretful, what if? And if his writing career ended, how would that affect his family? Would Linda be able to continue her own work? Would there be enough money to properly take care of Tommy, too?

I’m willing to bet that everyone here, regardless of profession, knows those questions.

What I liked best about The Novelist is how the feeling of being a witness to the Kaplans’ lives made me care about every member of the family in equal measure. Though the focus is on Dan, both Linda and Tommy are layered, complex people with layered, complex needs. I particularly felt for Linda, who had put her own career on hold, even though she shared Dan’s passion for making things. And Tommy — god, is there anything more painful than a lonely kid? I felt sympathy for all of them, and that’s what stung the most. As I crept around the house, I was keenly aware that I was not searching for an answer to the Kaplans’ worries, but to my own. This game held up a mirror to my most prevalent anxieties. I am still unsure if it was cathartic or uncomfortable. Whatever it was, it’s going to stick with me for a long time.

(Sidenote: I am now imagining a game in which Linda was the novelist, wrestling with her sense of purpose, faced with choosing her career or her kid. My, but wouldn’t that ruffle some cultural expectations?)

Though the gameplay is very simple (and a bit repetitive), I was surprised by how well a few basic stealth mechanics lent themselves to an emotional family drama. The Kaplans move around the house as people do, drifting from room to room without any truly predictable pathing. There was never much time to plan my approach, and I often found myself changing my strategy midstep, readjusting on the fly. It’s not difficult, but it did give me a skittish sort of feeling, which felt apt. I was a shy, well-meaning spirit, compelled to help, but aware that I did not truly belong among people. That, too, had poignancy.

The Novelist is best played in segments, like a book you dip into a little bit at a time. As each chapter plays out in a fixed format set within a relatively unchanging location, barreling through without a break would get tiresome. This isn’t a game you want to rush through. I recommend stopping after each in-game month. Consider your choices. Feel their weight. And if you have someone to hug afterward, I recommend that, too.

The Novelist is available for both Mac and Windows, with Linux on the way.