The Night Before Review: Plenty of Laughs but Not Enough Heart 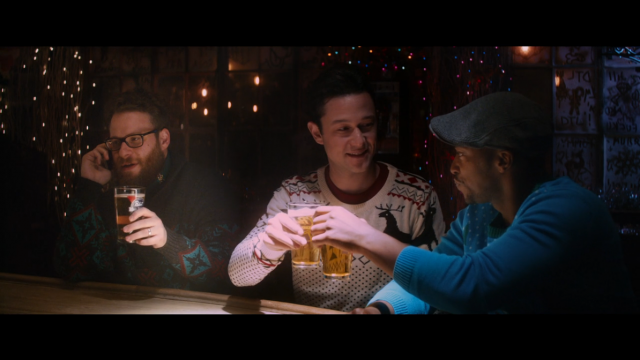 Director Jonathan Levine has managed to surprise me two times in recent years. The first was with his film 50/50, starring Joseph Gordon-Levitt and Seth Rogen, about a young man diagnosed with cancer. I was dubious about how on earth they would make a story about cancer funny without being crass, but they did, and earned genuine laughs and poignant emotional moments along the way. The second was his 2013 zombie romance Warm Bodies, which gave Nicholas Hoult arguably one of his best roles, but also managed to take what on page could have been a familiar story and made it into something witty and fun.

This, coupled with the fact that I’m someone who tends to enjoy all three of The Night Before‘s lead actors in their respective films, had me walking into the film with a decent amount of goodwill. The trailers had made me laugh and the film was just as funny as the clips had promised, but I wasn’t as surprised by the outcome as I’d been with Levine in the past. The Night Before works wonderfully as a comedy, and its more melancholy moments are also sometimes successful, but the movie has a tough time bridging the two.

When Ethan (Levitt) was in his early 20s, right before Christmas he lost his parents in a tragic accident. His two best friends, Isaac (Rogen) and Chris (Anthony Mackie) refused to let him stew in his grief and took him out on Christmas Eve to take his mind off of things, and from there a tradition was born where the three went out every year. This year Ethan manages to get tickets to a mysterious Christmas party they’ve heard of but have never attended. Over the years Isaac and Chris grew up and gained new responsibilities, Isaac getting married with a child on the way (which is causing him some feelings of doubt), Chris becoming a famous athlete after a suspiciously strong season late in his career. This Christmas Eve is their last hurrah, their last holiday spent together. This forces an in-limbo Ethan to address his own issues with commitment and growing up.

All of this is done through a comedic lens, and some of the best aspects of the film are when it allows its actors to utilize their physical humor, getting great mileage from Rogen’s Isaac growing progressively delusional due to the drugs his wife Betsy (Jillian Bell) gifted him before he left for his night out. Rogen has starred in a lot of funny films, and he’s a strong and reliable comedic actor, but he’s usually playing it straighter than those around him and The Night Before allows him to cut loose. Highlights include him trying to act normal after taking cocaine to counteract the mushrooms he’s had, and the highly marketed scene in the midnight mass with his wife and her family.

There’s an enormous supporting cast, from Lizzy Caplan playing Ethan’s ex who he’s still hung up on, to Mindy Kaling, Lorraine Toussaint, and a scene stealing Ilana Glazer. However, it’s Michael Shannon as the friends drug dealer that gets the most laughs.

As the main trio, Rogen easily gets the most to do in terms of comedy, with Mackie short-changed in terms of story resolution, and Levitt being placed in the slightly thankless role of the straight man character. Levitt has always been an actor I’ve enjoyed (particularly in his earlier roles), and he get’s some great moments (a “Wrecking Ball” scene being a high point), but even though his character is the one the film revolves on, there’s a feeling by the end that the film could have utilized him better. As a group I’m not convinced that the three actors sold me on their friendship, lacking the right chemistry to prove they’ve been friends for so long.

The movie’s greatest moments are its funny ones, it’s just a shame that more time couldn’t have been spent on emotional moments and character development.  The film has plenty of heart, and my first thought exiting the movie was how it was “cute”, but its heartfelt moments didn’t feel nearly as earned as the comedic ones. Strong in the first and second acts, middling in the third, the laughs in the first hour will keep you content throughout the rest of the film, even if it looses its steam.

Certainly worth a trip to the theaters to see, The Night Before doesn’t touch the director’s best, but it’s fun, and it’s a little silly, and with all of its references to other holiday films, could become a must see for the season.