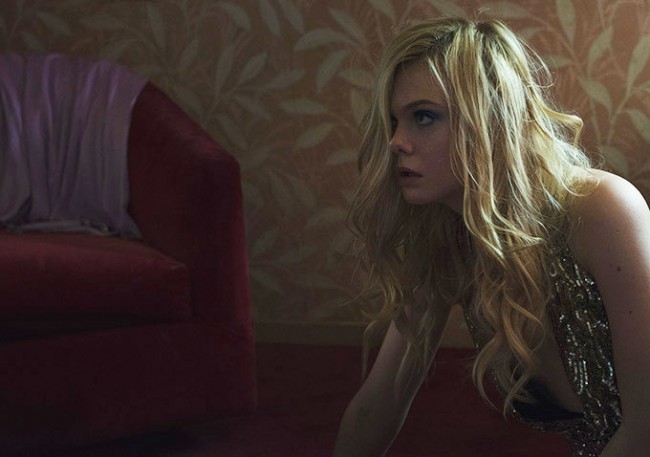 Trigger Warning: There will be images of blood in this article and discussion of assault. There will also be spoilers for The Neon Demon.

I wanted to like Nicolas Winding Refn’s The Neon Demon, mostly because it reminded me a lot of Mika Ninagawa’s Helter Skelter, but when I read the tagline “The face of an angel can awaken the demon,” I was a bit cautious. The idea of “dangerous beauty,” is one that I think needs to be used with caution—but I’ll get into that later.

The Neon Demon opens with Elle Fanning’s character, a 16-year old named Jesse, posed in high fashion makeup and clothes, sitting with her neck completely bloody. We immediately cut to her cleaning up and through a conversation with a friendly makeup artist named Ruby (Jena Malone) we learn Jesse is an orphan who just moved to a shady Pasadena hotel to be a model. Ruby brings Jesse to a party and we also meet models Sarah (Abbey Lee) and Gigi (Bella Heathcote). Gigi’s defining feature is that she’s the “bionic woman”—AKA loves cosmetic surgery—and Sarah has an accent and a snarky attitude. 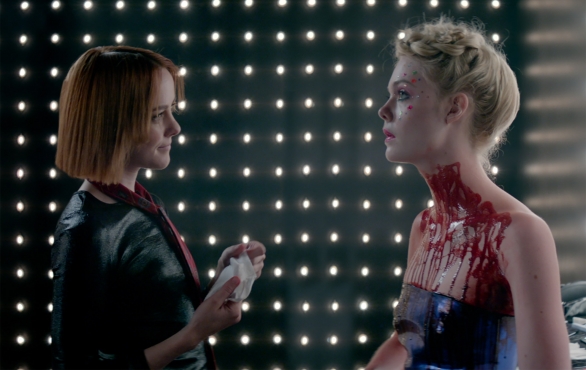 We meet some other main players, and we find out that Jesse is pretty. Like, not just regular pretty, but so pretty that everyone is drawn to her. Oh, and she’s naturally pretty which is the best kind of pretty. And, and she’s virginal! Literally, her defining character traits are that she’s young and attractive, with the movie constantly reminding you of these two facts. She steals a job from Sarah and closes a show that Gigi’s in, quickly making her way up the ladder. The film sets it up so it seems like Jesse’s beauty constantly puts her in precarious situations, with some ambiguity on whether it’s a supernatural or natural thing. A predatory famous photographer commands her to strip and slathers paint on her. Keanu Reeves plays the manager of the Pasadena motel, and he’s very, very unsavory. We also have her simple boyfriend-ish character Dean. He’s the only one who knows she’s 16. He is not. And finally, there’s a fashion designer who sees her and immediately makes her his Muse. The lifestyle starts growing on Jesse, and Elle Fanning delivers lines like, “I don’t want to be them. They want to be me” the best she can.

But the real villain? It’s the three women. Or is it Jesse’s growing narcissism? Anyway, the male characters are pushed aside in the second half and we find the evil was female competition all along! Ruby, who was nothing but kind and supportive previously (giving Jesse her phone number in case anything happened, doing her makeup, trying to protect Jesse from predatory photographers) has apparently been lusting after Jesse and straight up assaults her before Jesse pushes her off the bed. Because the only reason a woman would be nice to another woman is if lesbians. Taking another page from unfortunate queer representation, there’s also a necrophilia scene where Ruby masturbates on top of a corpse. At the film’s conclusion the three women eat Jesse and bath in her blood. Ruby basks in the moonlight as blood streams from her lower region, Gigi pukes one of Jesse’s eyeballs and stabs herself, and Sarah eats the eyeball and continues modeling.

While there are a lot of entertaining moments and humor in The Neon Demon, the way in which the second half affirms that Jesse has a kind of “power” of attraction that compels others to love or attack her is a very dangerous narrative. Through eating her, it’s suggested that Gigi has somehow gained a new level of attractiveness through a job offer from predatory photographer. At one point in a monologue, Jesse says, “know what my mother used to call me? Dangerous. ‘You’re a dangerous girl.’ She was right. I am dangerous.” Is Jesse right? In the world of the movie, it genuinely feels like she is dangerous through little fault of her own. Had The Neon Demon used Jesse’s destruction as a means to talk about how danger is ascribed to female bodies and how that myth damages the way one views themselves, there could have been a really compelling dissection of beauty. How many times have young girls been told that their bodies are dangerous, tempting, things to be scared and worried about? Blamed for the violence that others inflict upon their bodies? At one point, Keanu Reeve’s manager calls her “Hard Candy” and her 13-year old neighbor “some Lolita shit,” which made me hopeful, but alas.

The film also takes shots at celebrity/fame culture, but pushing aside the earlier predatory male character in favor of a “women eat each other alive, but literally” story makes it fall short for me. There’s quite a bit of camp that makes a lot of their snarky interactions more funny and self-aware, which I was very thankful for. Still, female competition and the ways in which they’re pitted against each other are a real problem, but prioritizing Sarah and Gigi’s jealousy and making them the main villains is something else. You can’t have it both ways. You can’t have an unnecessary and out-of-place dream scene where Keanu Reeves is slowly and gratuitously forcing Elle Fanning to deep-throat a knife and then critique the sexualization of young girls!

Anyway, here are some things I did like about The Neon Demon:

Have you seen The Neon Demon? What did you think about how the film used dangerous beauty? Let’s talk about it in the comments!