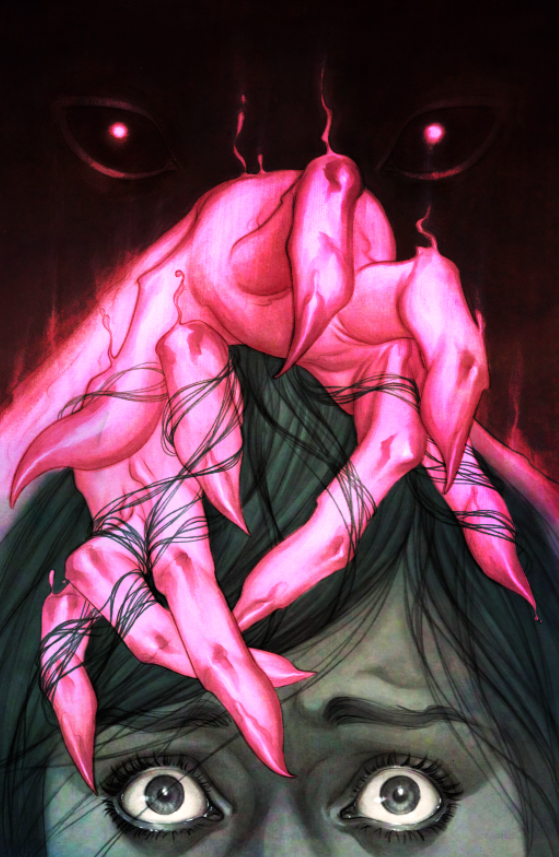 Gail Simone is well known for her work at DC Comics, but she’s taking a detour next Spring as she joins with artist Jonathan Davis-Hunt for their first Vertigo Comics ongoing series, Clean Room. The series was just announced at the Vertigo panel at New York Comic Con, but The Mary Sue has the first exclusive interview with the creator to see what it’s about!

Clean Room is a psychological horror series featuring Chloe, a reporter whose fiancé is murdered while investigating a church that bills itself as being able to cure disorders through an expensive series of therapies. The church, led by Astrid, performs procedures in “the Clean Room,” a “hermetically sealed and biologically impervious high-tech chamber below the church’s main offices.” What could go wrong?

Gail Simone: Well, I do hate nature’s majesty and wonder, because nature is a jerk.

Actually, I feel that this rep I have is a little askew. I do like to write about dark things, but I sincerely believe heroism is about struggling against things that matter. I don’t find it really all that meaningful when our heroes don’t break a sweat, are never really tested in their soul. Even something like Leaving Megalopolis, it’s survival horror, but the emphasis is on the first word through the entire book. And with Batgirl, you know, I wanted her to triumph over a very dark, Gotham world, in ways that weren’t about just punching.

I love action and horror and adventure stories, but the message that means something to me is when people get knocked down, and don’t give up. There’s a lot of heroism in just surviving, sometimes.

TMS: Seems this new story flips the script on what we normally see, which is usually girlfriend or wife murdered and “man seeks answers.” Was that intentional?

Simone: Not as a statement in itself, no. Everyone has some loss in their lives, we all have despaired because someone was suddenly gone. I think that’s a very powerful shared human experience, and that’s part of what motivates Chloe, our journalist protagonist. She’s lost her fiancé, but that’s not what drove her to despair…you’ll have to read the book, Jill.

TMS: Was it inspired by anything in the real world? Is it set in current time?

Simone: It’s in current time, absolutely, and it’s inspired by a theme that I keep coming back to, which is that the seats of power are rarely what we think they are. Some corporate dude we will never even hear of might have more power over the quality of our lives than our own senators, and that’s a scary thing to me. There are forces out there and we can’t fight them because we don’t know them.

I am also very interested in how quickly people are able to weaponize people who feel powerless and disenfranchised, you see it all over the political spectrum. It’s the opposite of a true grass roots movement, it’s often well-funded and carefully executed. You can’t blame people for being fed up, but turning on each other seems to be an easy thing to make happen, it just never stops. There are malevolent forces out there, I want the next great hero to be someone who goes after those forces, not jewel thieves.

TMS: Tell us a bit about Chloe and what her life is like before all the action happens.

Simone: Chloe is a small-town journalist from Florida, and she has a charismatic and talented fiancée who is a bit of an ass at times. Her fiancée becomes obsessed with the writings of a self-help guru, Astrid Mueller, and one day, he kills himself with her open book still on the kitchen counter beside him.

Chloe wants to know what’s in that book that inspired him to do this. So right or wrong, she has nothing to lose, and she goes after Astrid’s incredibly powerful organization. But there’s much, much more to Astrid than Chloe could possibly know, and some of it is far beyond what she could ever have imagined.

Astrid has a Clean Room. And what happens there can’t be explained. And it’s bad. It’s so, so bad. 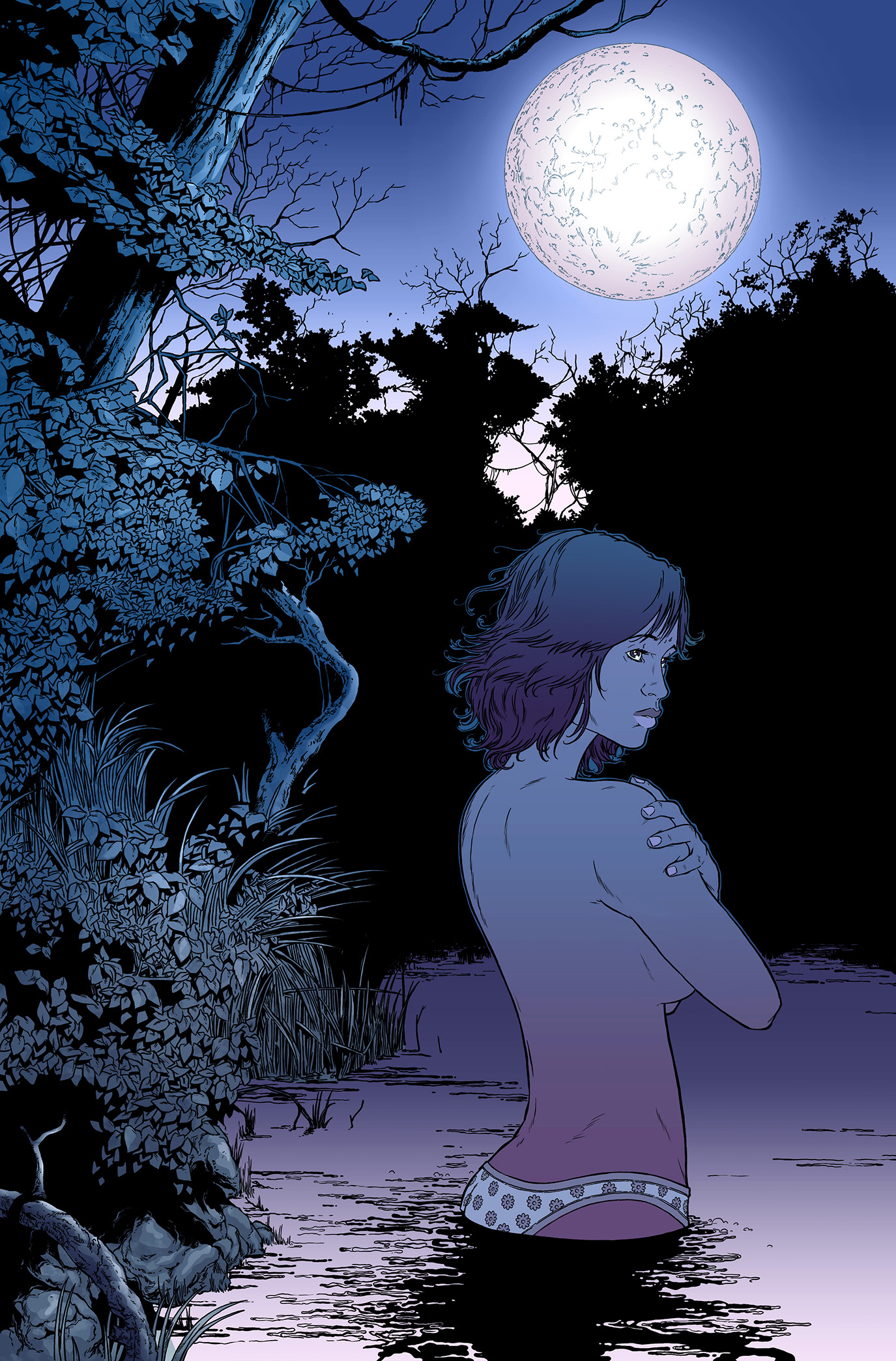 TMS: And what about Astrid?

Simone: It’s an interesting thing that some of the most megalomaniacal people are the most charismatic. Is Astrid on the side of the angels, or not? In the Clean Room, Astrid knows your secrets. And then she owns you.

TMS: I’m not sure how far along you are yet in the creative process, so I’ll just ask if you were a fan of Jonathan Davis-Hunt’s work before joining him on this project.

Simone:  I wish I could say that I had been, but I am a newcomer to his work. We looked at literally dozens of artists, but Jonathan blew our minds immediately. He sent in sketches of the characters that did not match the descriptions I had sent, and was like, “I hope this is okay, I saw them more like this…”

And HE WAS RIGHT. I mean, Shelly and I both immediately were amazed, he got their look better than I did, I changed the scripts to match and Jonathan came aboard and he’s going to be a star. Watch and see. He drew a haunting first page, it takes your breath away, and then he colored it three different ways to see which gave the most impact. He’s astounding. I could not be happier.

TMS: How it is working on the Vertigo side of the company?

Simone: The best. Just the best. I have wanted to do a Vertigo book for some time, but it didn’t happen for whatever reasons. But Shelly Bond has been this book’s champion since Day One and I dearly love her. There would be no Clean Room without her. When she gives notes, they are always spot-on. She cares deeply about the books at every level, and I just find that completely inspiring.

But beyond that, this is a story I really want to tell and they got me a ridiculously great artist and have backed me all the way. I am delighted.

TMS: “Exorcism gone digital” sounds extremely intense, scary, and entertaining. What can we expect from the series as time goes on?

Simone: You know that feeling when you walk on ice, and it starts to crack below you? I can’t ever help but feel, what if there’s nothing below this ice, what if when it cracks, you start falling and never stop?

That’s how I feel reading this book, what if the ground we think is solid is a thin layer and there’s just a void underneath? The world is not what we have been led to believe. There are horrible secrets and a lot of people invested in you never knowing that.

But there are no secrets in the Clean Room.

Clean Room will be out Spring 2015 from Vertigo.