Winter has arrived, and with it some fantastic December reads! This month is the perfect time to rest, reflect, and read to your heart’s content—which won’t be difficult considering the wonderful variety of releases available for your perusal. From heart-stopping series finales and vividly enriching anthologies to promising author debuts, there are more than a few gems on this list that are sure to land in your bookshelf as your newest beloved fave. Enjoy!

A Sky Beyond The Storm by Sabaa Tahir 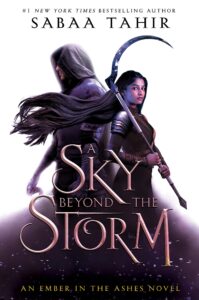 The long-imprisoned jinn are on the attack, wreaking bloody havoc in villages and cities alike. But for the Nightbringer, vengeance on his human foes is just the beginning.

At his side, Commandant Keris Veturia declares herself Empress, and calls for the heads of any and all who defy her rule. At the top of the list? The Blood Shrike and her remaining family.

Laia of Serra, now allied with the Blood Shrike, struggles to recover from the loss of the two people most important to her. Determined to stop the approaching apocalypse, she throws herself into the destruction of the Nightbringer. In the process, she awakens an ancient power that could lead her to victory–or to an unimaginable doom.

And deep in the Waiting Place, the Soul Catcher seeks only to forget the life–and love–he left behind. Yet doing so means ignoring the trail of murder left by the Nightbringer and his jinn. To uphold his oath and protect the human world from the supernatural, the Soul Catcher must look beyond the borders of his own land. He must take on a mission that could save–or destroy–all that he knows. 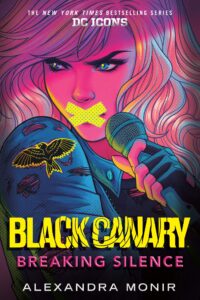 THE HANDMAID’S TALE meets the DC universe in this breathtaking, thrilling origin story of Black Canary. Her voice is her weapon, and in a near future world where women have no rights, she won’t hesitate to use everything she has to fight back.

Dinah Lance was seven years old when she overheard the impossible: the sound of a girl singing. It was something she was never meant to hear—not in her lifetime, and not in Gotham City, taken over by the Court of Owls. The sinister organization rules Gotham as a patriarchal dictatorship, all the while spreading their influence like a virus across the globe.

Now seventeen, Dinah can’t forget that haunting sound, and she’s beginning to discover that her own voice is just as powerful. But singing is forbidden—a one-way stop to a certain death sentence. Can she balance her father’s desire to keep her safe, a blossoming romance with mysterious new student Oliver Queen, and her own desire to help other women and girls rise up and finally be heard? And will her voice be powerful enough to destroy the Court of Owls once and for all?

The Blade Between by Sam J. Miller 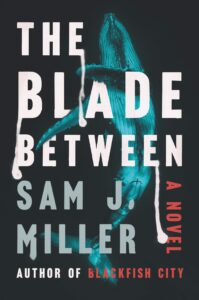 Ronan Szepessy promised himself he’d never return to Hudson. The sleepy upstate town was no place for a restless gay photographer. But his father is ill and New York City’s distractions have become too much for him. He hopes that a quick visit will help him recharge.

Ronan reconnects with two friends from high school: Dom, his first love, and Dom’s wife, Attalah. The three former misfits mourn what their town has become—overrun by gentrifiers and corporate interests. With friends and neighbors getting evicted en masse and a mayoral election coming up, Ronan and Attalah craft a plan to rattle the newcomers and expose their true motives. But in doing so, they unleash something far more mysterious and uncontainable.

Hudson has a rich, proud history and, it turns out, the real estate developers aren’t the only forces threatening its well-being: the spirits undergirding this once-thriving industrial town are enraged. Ronan’s hijinks have overlapped with a bubbling up of hate and violence among friends and neighbors, and everything is spiraling out of control. Ronan must summon the very best of himself to shed his own demons and save the city he once loathed. 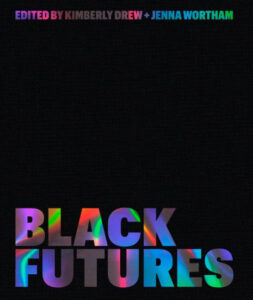 What does it mean to be Black and alive right now?

Kimberly Drew and Jenna Wortham have brought together this collection of work–images, photos, essays, memes, dialogues, recipes, tweets, poetry, and more–to tell the story of the radical, imaginative, provocative, and gorgeous world that Black creators are bringing forth today. The book presents a succession of startling and beautiful pieces that generate an entrancing rhythm: Readers will go from conversations with activists and academics to memes and Instagram posts, from powerful essays to dazzling paintings and insightful infographics.

In answering the question of what it means to be Black and alive, Black Futures opens a prismatic vision of possibility for every reader.

The Arctic Fury by Greer McAllister 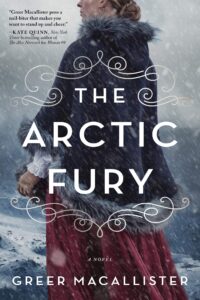 In early 1853, experienced California Trail guide Virginia Reeve is summoned to Boston by a mysterious benefactor who offers her a once-in-a-lifetime opportunity: lead a party of 12 women into the wild, hazardous Arctic to search for the lost Franklin Expedition. It’s an extraordinary request, but the party is made up of extraordinary women. Each brings her own strengths and skills to the expedition- and her own unsettling secrets. A year and a half later, back in Boston, Virginia is on trial when not all of the women return. Told in alternating timelines that follow both the sensational murder trial in Boston and the dangerous, deadly progress of the women’s expedition into the frozen North, this heart-pounding story will hold readers rapt as a chorus of voices answer the trial’s all-consuming question: what happened out there on the ice?

King of the Rising by Kacen Callender 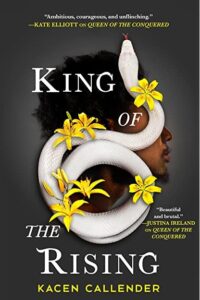 The second novel in the Islands of Blood and Storm series set in a Caribbean-inspired fantasy world embattled by colonial oppression—perfect for fans of R.F. Kuang and Tasha Suri.

A revolution has swept through the islands of Hans Lollik and former slave Loren Jannik has been chosen to lead the survivors in a bid to free the islands forever. But the rebels are running out of food, weapons and options. And as the Fjern inch closer to reclaiming Hans Lollik with every battle, Loren is faced with a choice that could shift the course of the revolution in their favor-or doom it to failure.

A Universe of Wishes edited by Dhonielle Clayton 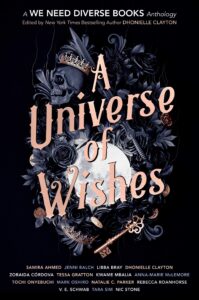 In the fourth collaboration with We Need Diverse Books, fifteen award-winning and celebrated diverse authors deliver stories about a princess without need of a prince, a monster long misunderstood, memories that vanish with a spell, and voices that refuse to stay silent in the face of injustice. This powerful and inclusive collection contains a universe of wishes for a braver and more beautiful world.

The Last Resort by Susi Holliday 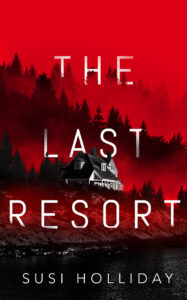 When Amelia is invited to an all-expenses-paid retreat on a private island, the mysterious offer is too good to refuse. Along with six other strangers, she’s told they’re here to test a brand-new product for Timeo Technologies. But the guests’ excitement soon turns to terror when the real reason for their summons becomes clear.

Each guest has a guilty secret. And when they’re all forced to wear a memory-tracking device that reveals their dark and shameful deeds to their fellow guests, there’s no hiding from the past. This is no luxury retreat—it’s a trap they can’t get out of.

As the clock counts down to the lavish end-of-day party they’ve been promised, injuries and in-fighting split the group. But with no escape from the island—or the other guests’ most shocking secrets—Amelia begins to suspect that her only hope for survival is to be the last one standing. Can she confront her own dark past to uncover the truth—before it’s too late to get out? 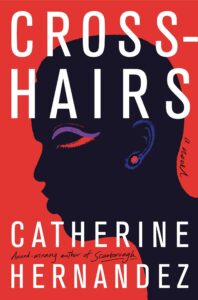 In a terrifyingly familiar near-future, with massive floods that lead to rampant homelessness and devastation, a government-sanctioned regime called the Boots seizes the opportunity to force communities of colour, the disabled and the LGBTQ2S into labour camps in the city of Toronto.

In the shadows, a new hero emerges. After his livelihood and the love of his life are taken away, Kay joins the resistance alongside Bahadur, a transmasculine refugee, and Firuzeh, a headstrong social worker. Guiding them in the use of weapons and close-quarters combat is Beck, a rogue army officer who helps them plan an uprising at a major internationally televised event.

With her signature prose, described by Booklist as “raw yet beautiful, disturbing yet hopeful,” Catherine Hernandez creates a vision of the future that is all the more terrifying because it is very possible. A cautionary tale filled with fierce and vibrant characters, Crosshairs explores the universal desire to thrive, to love and to be loved as your true self.