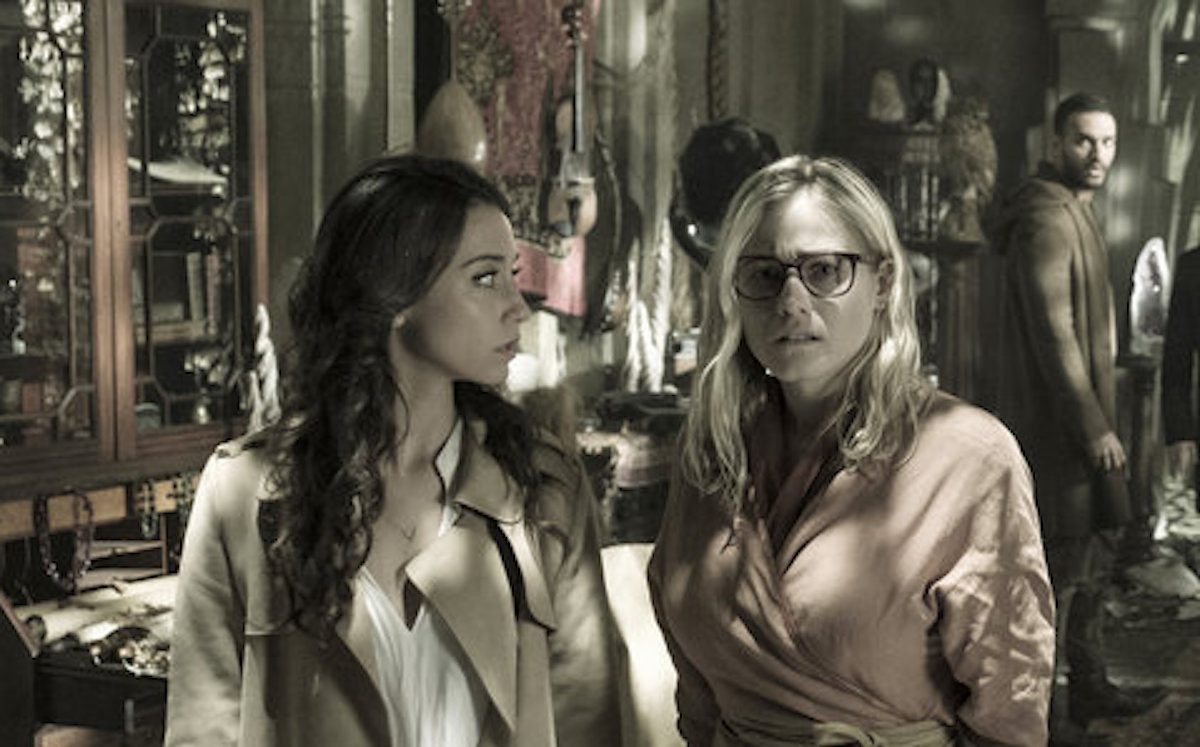 So, what does a good alternative universe episode do? It’s not just goatees and everyone being an evil bi/pansexual. Star Trek may still think alternate versions of characters are most interesting when they’re evil and queerer, but The Magicians goes to the next level. Different circumstances have surrounded the characters we love. In timeline twenty-three, the battle of The Beast was set up and therefore played out differently. There are shocking revelations, and yet everything still makes sense.

In order to even have an alternative universe episode, a show has to be able to rely on all it has previously built in character development, as well as world-building. Being that character development and world-building are The Magicians’ biggest strengths, this episode has one of the best look-who’s-evil reveals in history. I could easily watch it over and over again for the different way the actors carry themselves alone. I’m a person who prides themselves on predicting storylines, and I did not see this one coming—and yet it all made perfect sense.

As with Dan Harmon’s Community episode, “Remedial Chaos Theory,” this alternative universe episode doesn’t just tell a story of a different fate. It allows you to see how the characters affect each other’s fates. It makes you ask hard questions about who or what can have irrevocable affects on people and the world. The audience’s best guides to this alternate universe are with Julia and Josh. Julia continues to become a true goddess, as a very attached human being who desires to be benevolent and responsible. She is the antithesis of The Beast.

Josh is the audience—he’s seen alternative universe episodes. He knows who he is, so when he sees the other Josh, he isn’t shaken. He’s only shaken when he gets to know himself. Apparently, he hasn’t seen enough alternate universe episodes to know that you should never fully trust yourself.

Alice is surely the character who trusts herself least in universe twenty-three. If there are any Alice/Q shippers, they will both be happy and miserable with how Alice can love Q when she has different losses in her life.

Sadly, Q has bigger losses to worry about. Everyone seems to have bigger losses in this universe. Penny, of course, does too. If you’re a Penny fan, you may’ve noticed that once Penny got the voice of The Beast, and others, out of his head (way back in season one), he changed. I don’t have to be a therapist to tell you that if you’d been hearing voices your whole life and they suddenly ceased, you’d most likely behave rather differently. This is barely mentioned, as Penny doesn’t talk about it, but you can see with Arjun Gupta’s talent how Penny’s body language and facial expressions have loosened from season one. While he still has his share of challenges, he trusts himself and who he loves.

Universe twenty-three Penny is still a lover, but his motives are different. Universe twenty-three Penny no longer suffers from voices either, and he’s very proactive. Julia’s reaction to him as a powerful goddess who has no reason to fear is very sweet. Some may disagree, but I think this is a rare example of when “romantic-comedy behavior that will normally get you arrested” was understandable.

Julia’s reaction to everyone is moving and subtle. She isn’t a pious, over-the-top saint-like deity. I don’t think she’s calling herself a goddess, but I am. Usually, when women become goddesses in fiction, they are no longer themselves. They turn into completely different, inhuman creatures or become bland versions of themselves. Julia has become neither of those things. She tells Josh she doesn’t know what’s going to happen, nor can she judge what’s good or bad.

Battle-scarred Dean Fog is up to his old tricks. As someone who can remember all the timelines, this one is particularly difficult. As he always seems to be forced into the role of observer, you can’t help but have sympathy for him. However, he does seem to make particularly bad choices this go-round. We know he had relations with Marina.

Marina, the top Hedge Witch Bitch of New York, is alive and well in timeline twenty-three. You may have figured out I am a huge fan of the bad girl. So, let’s not forget that Marina helped Julia after her brutal attack. I also know we can’t forget that she killed Kady’s mom. So, a living Marina would cause a lot of chaos if she were in our universe—universe forty, I believe.

After the episode, one could easily say:

Yes, Penny could have another soul-mate. There could easily be a dick Josh. Of course, when forced out of party mode, Margo and Eliot are going to rally to become extreme problem solvers, with their love for each other apparent. Alice could work for bunny pirate Captain Hops. Hey, maybe in universe twenty-three, Captain Hops is even friends with Marlon Bundo. (If you don’t know Marlon, he’s a bunny whose beautiful alt universe love story you can buy here, with proceeds going to the Trevor Project and AIDS United.)

I personally would love another alternate universe episode where Eliot is straight and utterly evil, just to fly in the face of the gay-and-evil alternative universe episode trope. Maybe Eliot repressing who he really is made him evil, like original universe Marlon Bundo’s grandpa and the alt universe stink bug—but that just sounds like gonzo fanfic. Then again, so does bringing two characters from the alternative universe into our own. Maybe it’s not so gonzo, or maybe, if a show is good enough, it can make gonzo the new gold. I can’t wait to see what happens next!