On The Magicians' Portrayal of Sexual Assault | The Mary Sue

On Syfy’s The Magicians and Its Portrayal of Sexual Assault

Plus its striking similarities to The Force Awakens. 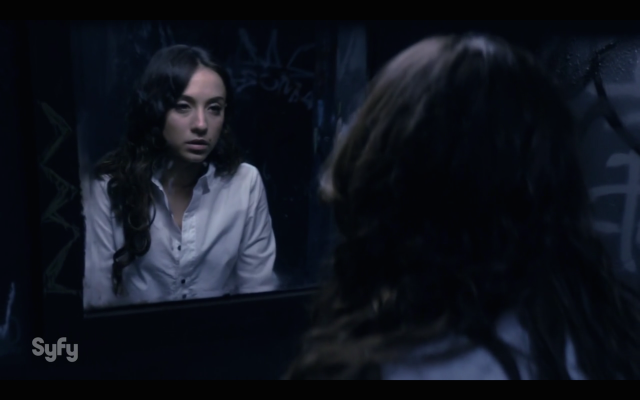 Fans of Lev Grossman’s The Magicians novels understand just how twisted and dark the books can be. It was, after all, described as a “more adult Harry Potter.” So when Syfy announced that they were developing a show based on the books, it begged the question of how the hell they were going to pull that off. Showrunner Sera Gamble commented on the idea of the show being dark and twisted in an interview with Entertainment Weekly, saying, “We’re going there with the series. There’s violence that feels quite sexual as early as the pilot.”

Cut to: the show’s first episode. The show is currently structured in such a way that the first and second books are meshed together. Julia’s story after she is intertwined with Quentin’s story at Brakebills, the magical grad school. Her story actually takes place in the second book, but meshing the two together allowed her to remain in the current season, which works for television.

But the thing is–and I’m working around some mild spoilers here–the scene in which Julia is recruited into a different magical school involves some sexual violence. She’s sexually assaulted in a restroom, in a scene that definitely made me groan and took me out of the show for a bit.

Gamble expanded upon her feelings about embracing the source material’s darker side, saying:

I’m going to quote Jeremy Irons when he decided to play the role of Humbert Humbert in the Lolita remake. He was asked about that book’s political firmament. And he said simply: ‘To portray something is not to condone it.’ If you decide to play Oedipus Rex, you’re not going to rehearse by having sex with your mom — I hope. If you’re playing Macbeth, you’re not encouraging others to go out and kill for power. You’re portraying something. And by the way, in the spirit of Lev’s books, we’re just as tough on men as on women. We’re equal-opportunity offenders.

I think the only reason I’m not outright pissed about the scene is that it didn’t feel extremely gratuitous. It wasn’t anything like you’d see on Game of Thrones, for instance. That being said, it was a scene that definitely had some moments that catered to the male gaze and all, but it didn’t feature any gratuitous shots of body parts or anything. It could very well be triggering, but it wasn’t too explicit with its content.

A similar, almost identical scene that can be placed in parallel with this one is Rey’s interrogation scene in The Force Awakens. There were absolutely rape and assault metaphors there, and the language is even the same–both men talk about how they can take or do whatever they want to the “helpless” women. But in both instances, the women fight back or break themselves free.

While there’s a whole separate can of worms around the idea that women “need to be assaulted” in order to find their true power, it feels like the subtext to both scenes are practically the same. Each of these scenes are distinct yet similar takes on how to turn the “helpless female” trope on its head. Trying to tread the line between becoming just another sexual assault scene is an incredibly difficult task for a writer, but in each case, it’s something that they handled as best they could.

As an aside: it’s important to note here that the key difference between the scenes is that Julia had her shirt forcibly removed before she was held captive. It definitely made the sexual nature of the assault so much more than just a metaphor, as it was in The Force Awakens, and that’s where I find myself disagreeing with the creative choices around the bathroom scene–to me, this is still sexual assault, and it is still gross. In a lot of ways, TFA proves that the idea behind the scene could have been delivered just as effectively without that happening at all.

But if you took this scene and you placed it in any other show on any other network, then you’d definitely be getting gratuitous cleavage and grossness everywhere. I think what Gamble and the show’s creative team did with it was a difficult compromise between being true to the material without being too true, if you know what I mean… and it kind of worked. They handled a difficult scene better than literally any other show would have handled it, and that makes it a pretty welcome change.

I think this consciousness around what they’re doing and why they’re doing it will be what sets The Magicians apart from its contemporaries. As long as they’re able to keep these scenes dramatic–and not titillating for titillation’s sake–then they’re a step (albeit a small step) ahead of most television shows out today.

It would be nice if sexual violence didn’t have to be an integral part of every woman’s story. But… then again, we don’t exactly live in a world without sexual violence, now do we?