The Legend of Korra Newbie Recap: “The Ultimatum” 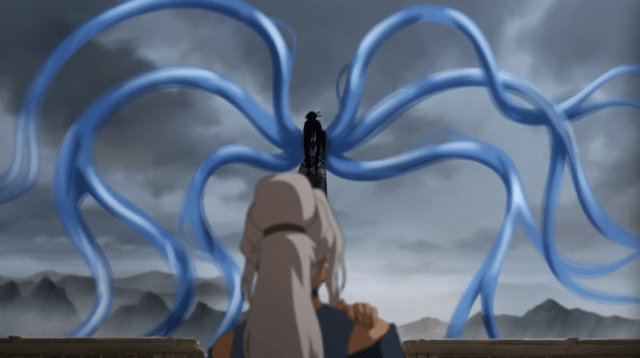 We waste the first five minutes of “The Ultimatum” on Bolin and Mako stealing an airship and tooling around the desert looking for Korra before figuring out what we already know, which is that she’s back in the Misty Palms Oasis cooling her heels with Asami, Lin, Tonraq and Zuko. Eh? I guess I’m still used to ATLA seasons, where shit would be pumped to 200% intensity by this point. But hey, at least it’s not season two, and at least Mako and Bolin took a detour to the lower ring to rescue their newfound family, including their grandmother, who’s all like NUH-UH, I WON’T LEAVE JUST BECAUSE MY DOOR’S ON FIRE, WHAT DO YOU THINK I AM, A P U N K?

We also get a heck of a lot of adorable, like Bolin’s reunion with Pabu. 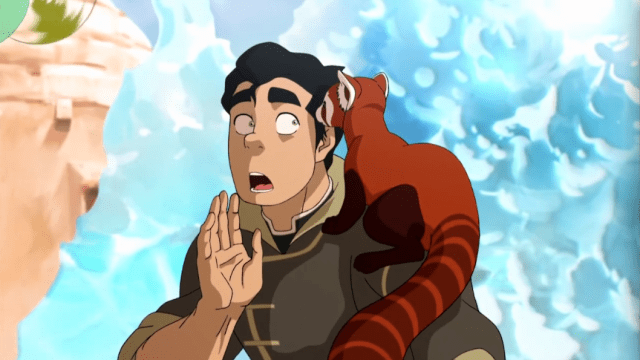 and his reaction to meeting Zuko: 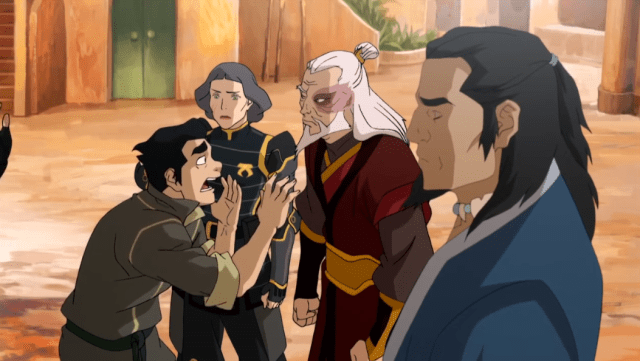 But enough padding! Mako delivers Zaheer’s message to Korra: He’s on his way to the Northern Air Temple, and if Korra doesn’t want him to kill the fuck out of everyone there, she’d better turn herself in. There’s some drama about how they DON’T HAVE A RADIO WITH A STRONG ENOUGH SIGNAL TO REACH THE NORTHERN AIR TEMPLE, LE GASP (… man, this episode is really reaching), so eventually the whole group tromps off to Zhao Fu to avail themselves of some fancy schmancy tech. Of course, no one in the Air Temple picks up the phone. Shock! Horror!

It’s a long shot, but Korra figures that while everyone else is readying an airship for departure, she might be able to zap into the spirit world and gatecrash one of Zaheer’s meditation sessions. Alas, Zaheer’s not there. But Iroh is! And I still maintain that Korra’s Iroh voice actor is juuuuuust different enough from ATLA’s (RIP) to make Iroh slightly creepy every time he opens his mouth. It’s vocal uncanny valley.

Anyway, Iroh suggests that, in lieu of getting advice from her past lives—which she is no longer able to do—she talk to Zuko, who after all was Aang’s BFF. Back in the physical world, Korra hunts down Zuko, who’s just about to head back home so he can protect his daughter, the Fire Lord, from the world leader-assassinating habits of the pesky Red Lotus. His advice—though appreciated by Korra—is basically non-advice: Aang would have sacrificed a heckuva lot to protect the Air Nation, as it was his greatest wish to see its resurgence, but at the same time, Aang knew that the Avatar is important to every nation, so the whole “not dying” thing is also good

On the one hand: One thing. On the other hand: THE COMPLETELY OPPOSITE THING. Have fun choosing! That is useless, Zuko, you beautiful rainbow muffin dog! Good to know you inherited the ability to give overly cryptic yet wise-sounding advice from your uncle, though. Speaking of, this is Zuko’s face when Korra mentioned offhand she’d been chatting with Iroh, who’s been dead for however many decades: 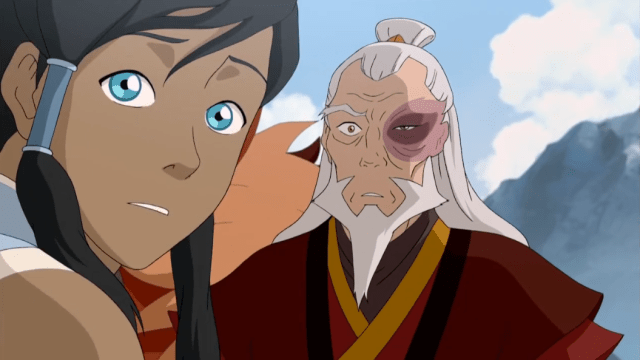 My love for you never fades, my son.

Meanwhile, Bolin’s managed to get in touch with Tenzin at the Air Temple … at the same exact moment Zaheer and the Red Lotus show up to bust some heads. But ain’t nobody gonna fuck with Tenzin’s family—he fights off Zaheer while Bumi and Kya take on Water Arms and Lava Guy, thus (hopefully) giving the trainees the chance to escape on air bison. 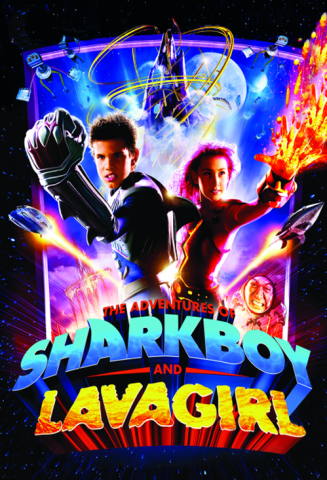 Bumi and Kya don’t do too well, but Tenzin full-on whups Zaheer’s ass, and it’s a glory to behold. YOU LIKE AIRBENDING? HERE’S SOME AIRBENDING, YOU JUMPED-UP LITTLE TWIT. You come at the king, you best not miss.

Kai deals with Sparky Sparky Boom Woman. He almost dies, but he manages to distract her long enough for the others to fly away. I think. If it involves Kai, I honestly don’t care much. The Red Lotus regroups and beats the shit out of Tenzin, who can take on one Kung Fu Tea Partier, but not three. So now (presumably), he’s their prisoner and leverage against Korra. 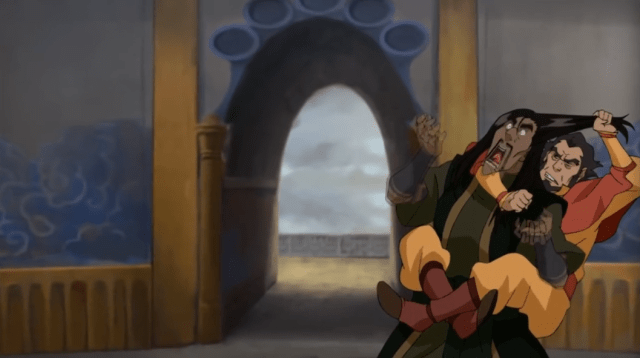