The Legend of Korra Newbie Recap: “The Terror Within” 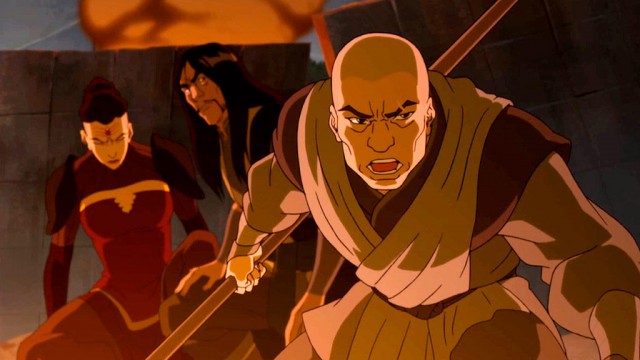 We start “The Terror Within” with Korra and Bolin doing some metabending sparring against Su’s twin sons, whose names I do not remember. (You do not need to drop me a line to let me know what they are, because I also do not care.) Korra’s picking it up pretty quickly. Bolin … not so much. Packing more cold cuts of angst into Bolin’s sadness sandwich is that his new girlfriend Opal is leaving town to go to the Northern Air Temple; the young luvahs will eventually reunite, but Bolin has some more tooling around with the rest of Team Avatar to find more airbenders to do first.

Zhao Fu closes up for the night, but Zaheer and his band of merry wannabe kidnappers (I need a name for them. The Evil Planeteers, Minus Heart? The Evil Ninja Turtles? Which one is Donatello?) have managed to sneak into the city already. Ming-Hua uses her waterbending skillz to do some Mission: Impossible glass-cutting action on the windows in Korra’s room, and The Evil Main Four Characters from Seinfeld manage to toxic dart Korra and Naga out of commission. Pabu, WHO HAS HIS SHIT TOGETHER, notices that the Avatar’s being kidnapped and wakes up Bolin, who should just listen to Pabu all the time, really. If Pabu and Bumi got a braintrust going, they could fix all of the ATLAverse’s problems in no time flat.

Then there’s a fight. P’li, woman after my own heart, uses her brain powers to blow shit up left and right, and Ghazan harnesses his inner child with a literal “the floor is lava” game. Korra’s still knocked out and completely fucking useless. But Lin Beifong is on the case, so watch out, motherflippers.

A big chunk of this episode is one extended fight scene, which makes for good viewing—”The Terror Within” felt like it went by about five times faster than “Original Airbenders,” which took forevvverrrrr—but not particularly great recapping. The good guys corner the bad guys and separate Zaheer from the other three, but the good guys are still in a pickle because they have to make it past Sparky Sparky Boom Woman in order to rescue Korra. Yeah, yeah. Hey, I want to talk about Star Wars. [WARNING FOR THE FORCE AWAKENS SPOILERS]

OK, Star Wars talk over. I just have a lot of feelings.

Su and Lin can drop down from the ceiling and rescue Korra from above, but in order for them to be successful Bolin has to employ some sharpshooter-caliber earthbending and knock P’li’s powers out with a pebble to the noggin. He freaks out about ALL THE RESPONSIBILITY—after he had his ego fluffed and prodded by a guy who turned out to be a president-kidnapping sociopath last season, he’s understandably suffering from some self-esteem issues—but gets the job done just in time. Lin and Su rescue Korra, but the Evil Beatles manage to escape.

Su is full-on INCENSED that that Evil Fantastic Four managed to sneak into her city, so she tasks her truthbender, Ai We, with interrogating all the guards (and Varrick) to see who let them in. Lin even wants Ai We to interrogate Su, which, come the fuck on, Lin. You are a grown-ass woman. A poor little schmuck named Han Lee is the one who’s found guilty, and a note from the Evil Three Musketeers Plus That Other One and a copy of the guards’ logbook found in his apartment seem to make the case open-and-shut. But Mako (who was framed last season) and Varrick (who framed him) are suspicious. How would some 18-year-old who’s never lived outside the city fall in with a band of criminal masterminds who have been locked up in supermax since before he learned to read? It’s obvious that Ai We—the only person in the city who can lie without being found out—is the Evil Sisterhood of the Traveling Pants’ real mole.

Team Avatar goes snooping in Ai We’s apartment and finds a secret staircase that he used to smuggle the Evil Girls From Sex and the City, Except Two of Them Aren’t Girls into Zhao Fu. Ai We comes back, realizes he’s been made, and escapes into his

… setting off a bomb (which Korra shields everyone from) in the process.

Korra wants to go after Ai We—he had an escape plan all ready to go, but Naga can track him—but Lin insists that she go back to Republic City where she’ll be safe from the clutches of Evil Ghostbusters. Korra (reasonably) points out that she’ll be no safer in Republic City than anywhere else, so she might as well do her damn job and be proactive. Su says she agrees with Lin, but really she was only placating her sister to buy Korra a bit of time; that night, several hours before Korra is supposed to ship off to Republic City, Su gifts Korra with a car and some supplies so Team Avatar can go on a heroic camping trip to hunt down Ai We and hopefully find the Evil A-Team in the process.

I’m really looking forward to seeing why Zaheer’s so obsessed with kidnapping Korra. Maybe he just wants to teach her macrame? You don’t know! (You do, actually, know.)