The Legend of Korra Newbie Recap: “Out of the Past” 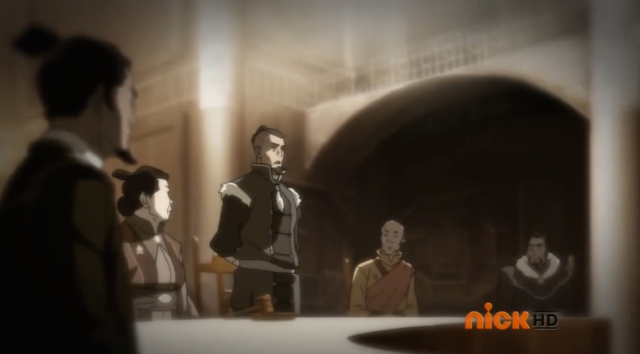 I didn’t love last week’s episode so much, partially due to my inability to take Tarrlok, aka Korra’s slightly-more-competent Commander Zhao, seriously. But hey—this week turned it around! Lin also just blew through the episode, kicking ass and taking names. This is becoming a trend.

Having kidnapped the Avatar using his freaky bloodbending powers, Tarrlok takes her up to the mountains and locks her in tiny metal box—one that, one can assume, is made of platinum, which we learned a few episodes ago is a favorite tool of the Equalists due to it being unbendable. My theory about Tarrlok working for the Equalists is disproven later this episode, but I still think it’s weird to have him use a tactic that’s fresh in the audience’s minds as “Hey, this is something the Equalists do.” Maybe I’m reading too much into it, and the writers are just trying to establish how similar Tarrlok and the Equalists are despite their ideological difference, not necessarily that they’ve ever worked together. Or maybe I’m reading way too much into it, and sometimes a metal box is just a metal box.

Anyway, Tarrlok goes back to Republic City, plants a taser glove at the scene of his fight with Korra, and tells the cops that Equalists kidnapped her. Then, my favorite part of the episode: Lin, currently retired as the police chief, gets the call about Korra’s abduction. Even though she’s still recovering from the ass-kicking she was dealt by Hiroshi Sato’s jaegers—as Tenzin tells her later, she really should be in the hospital—she gets up, metalbends her uniform on (imagine the pinching that must cause newb metalbenders the first few times they try it), and casually breaks Mako, Bolin, and Asami out of prison like she’s walking to the corner bodega to pick up a pint of milk.

(She then metalbends Bolin’s fly up. Again: pinching.)

Lin, Tenzin, Mako, Bolin, and Asami begin the hunt for Korra, whom they assume (wrongly) to be in the same underground tunnels the Equalists took Lin’s captured soldiers to. Mako’s a bit more freaked out by the kidnapping than he would be if Korra were 100% a casual friend, which Asami picks up on. 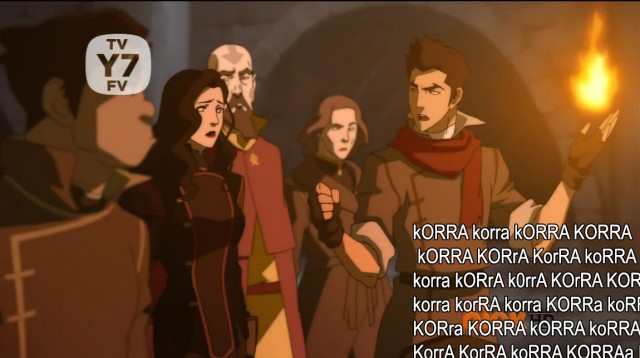 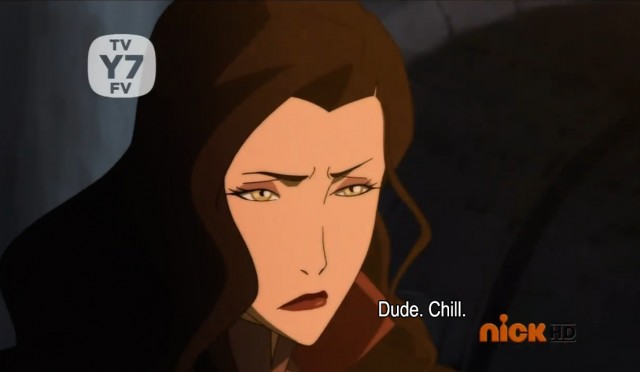 Asami, her bullshit-o-meter set to “on,” asks Bolin whether Mako likes Korra, and the physical embodiment of a golden retriever admits that they did kiss that one time. Asami is displeased.

Korra, unable to bust herself out of the box, decides, Fuck it, I have nothing better to do, I guess I’ll meditate and try to figure out what Aang wants to tell me. In a flashback, we see 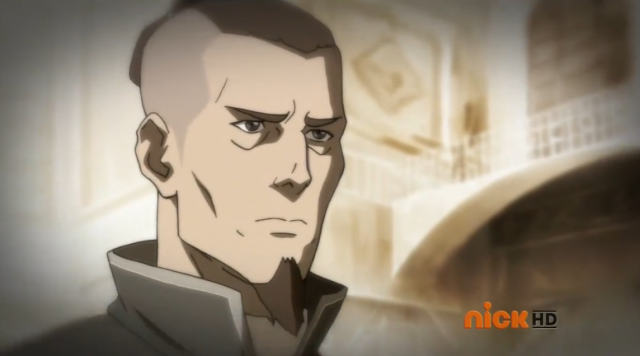 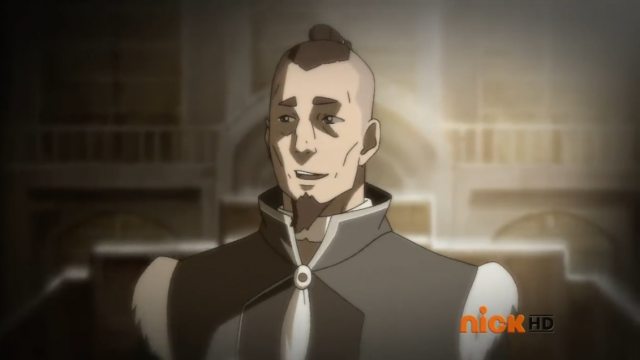 And some other things. 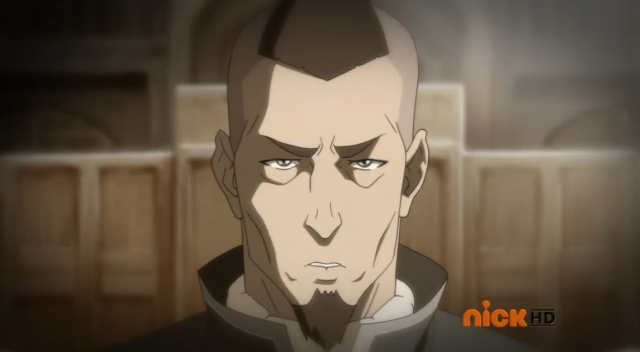 And SOKKA! And his trusty boomerang!

(Quick summary of the other stuff: There was one this Republic City crime bigwig called Yakone [the requisite Clancy Brown character, not that I am complaining], who could bloodbend whenever he wanted to, not just at the full moon. There was a trial, and the council—led by SOKKKA!—found him guilty. Yakone lost his shit and bloodbent everyone in the room, including Aang, so he could get away. Aang breaks free and gives chase, and Yakone bloodbends his wrist and leg until they break, which is pretty fucked up. Aang goes full Avatar state and removes Yakone’s bending, which is a skill he still has after using it in the ATLA finale against Ozai.)

AND SOKKA. You’re not deeeeadddd!

Meanwhile, Lin is bossing the hell out of the Korra rescue attempt, except for the part where Korra isn’t actually there. She finds her guards, whose bending has already been taken, and determines using Earth Sonar (TM) that Korra isn’t in the Equalists’ secret compound at all. That corroborates what Mako gets from a guard, which is that they never kidnapped her or attacked City Hall. Through means of Lin ass-kicking, the group escapes the tunnel and goes to tell the Council about Tarrlok, who picks the worst possible time to put in an appearance. 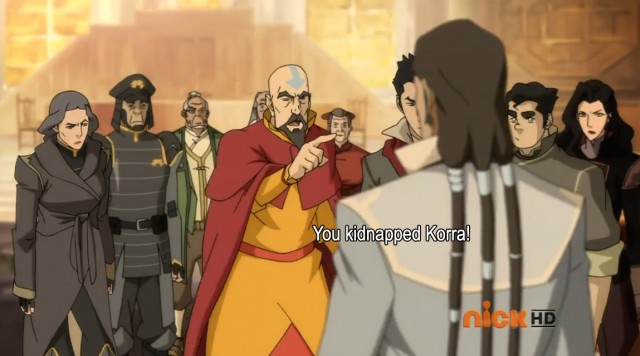 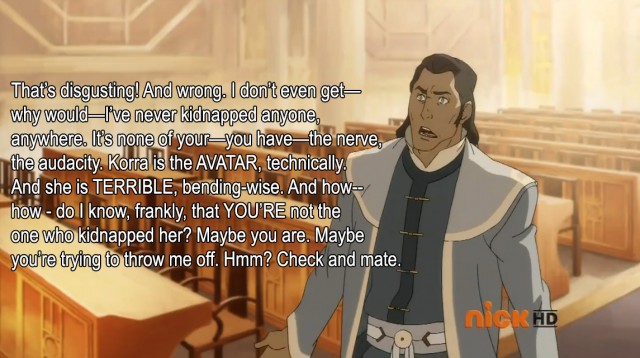 Tarrlok’s cover is blown when this awesome librarian-looking lady—Tarrlok’s assistant, I guess?—shows up to say she saw the whole thing, only she was too scared to say anything before because he’s a bloodbender. Tarrlok bloodbends everyone into unconsciousness (nice trick!) so he can escape and book it back to Korra. He tells her that, no surprise, he’s Yakone’s son. His dad fucked up by trying to take over Republic City through being a criminal, he explains, but he was going to achieve victory by positioning himself as the savior of the city. And he would have gotten away with it, too, if it hadn’t been for you darned kids. Now that Korra’s found out his secret, he has to run away and start a new life, and she’ll be coming with him as his hostage.

However eventually useless his plan may have turned out to be (season one villain), it’s interrupted by the arrival of Amon. Tarrlok’s able to bloodbend Amon’s guards, but not Amon himself. To be clear: Amon does not have some sort of magical immunity to bloodbending. He’s clearly affected by it; he’s just able to power through its influence, when everyone else—including the Avatar—was completely incapacitated by it. He then takes away Tarrlok’s bending. The entire exchange can be illustrated with the following gif:

Is it wrong that I’m starting to like Amon? I did like Azula from practically the first minute we saw her. It’s not weird, right?

Amon orders his guards to electrocute the box Korra’s in before taking her. Hearing that, Korra uses a piece of cloth to dangle herself from the ceiling so she’s not touching any metal (clever girl). When the guards open the door, she’s ready for them, playing possum for a few seconds before getting the fuck out of there. There’s a quick exchange of glances with Amon before Korra—who’s already beginning to leave some of her rash teenager “I WANNA FIGHT LET ME FIGHT!!!” attitude behind—does the smart thing and runs away. Well, skis away. Without any skis. How does that go? 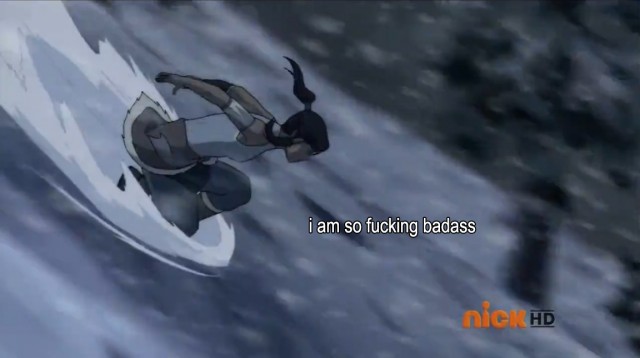 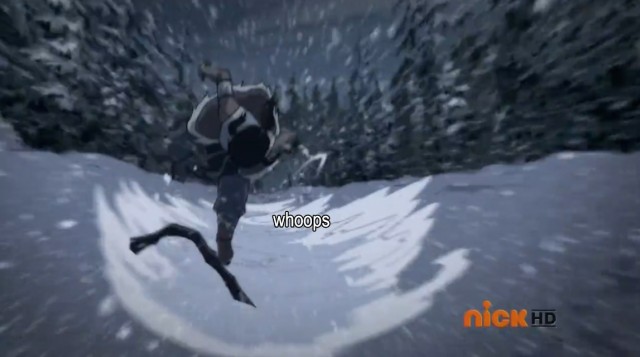 Naga—who’s been MIA this episode because she was looking for Korra, which she managed to do before anyone else, thank you very much—comes across Korra and takes her back to Republic City, where she meets up with New Team Avatar. Lin and Tenzin get all up in her face with questions, but Mako recognizes that she’s had a really shitty day and carries her lovingly out of the crossfire, much to Asami’s chagrin.

Look, writers, you can try to sell me all you want on this Mako/Asami vs Mako/Korra relationship drama, but I am not going to give a single shit about any of it when it’s so clear that Asami and Korra want to bone. 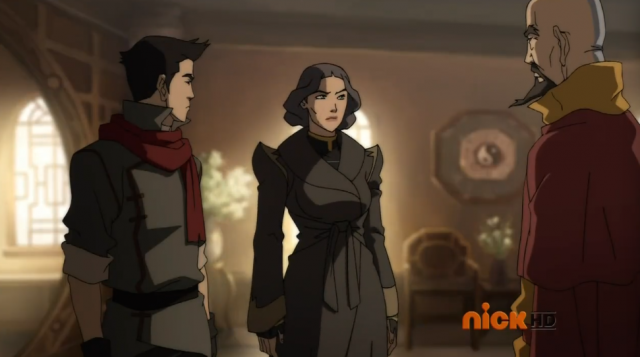 I’ll be taking a break next week,  but check back on July 16th for my recap of “Turning the Tides,” and then the two-part season one finale the Thursday after that.