The Legend of Korra Newbie Recap: “Long Live the Queen” 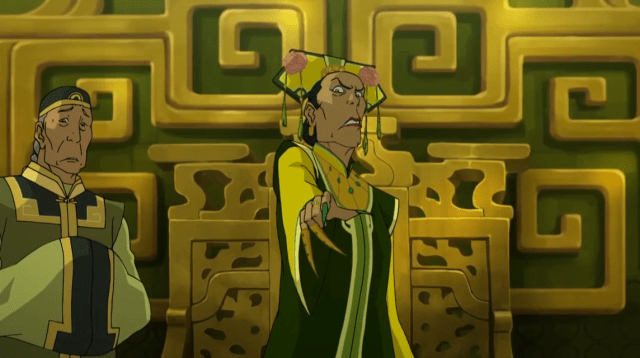 This episode is called “Long Live the Queen,” so I ASSUME that the Earth Queen is going to die. But maybe Freddie Mercury shows up and does a rousing rendition of “Fat Bottomed Girls” while Pabu and Bolin groove in the background? I don’t know.

Here’s the sitch since last episode: Asami and Korra have been captured by the Earth Kingdom’s soldiers so they can be schlepped off to Ba Sing Se and face punishment for bogarting the Earth Queen’s airbenders. Bolin and Mako have been captured by Zaheer and his buds (I really need a name for them. Is there a fandom-accepted term?); that entire group is also headed to Ba Sing Se, in theory so Zaheer can capture Korra himself.

But NOT IF ASAMI HAS ANYTHING TO SAY ABOUT IT, MOTHERFUCKERS! She punks one of the airship’s guards with an A++ “but could you chain me to that other thing? I have weak lady wrists uwu” damsel in distress routine, which allows her to bust out, trick another guard, and free Korra.

Because I’m worth it.

Except maybe they should have coordinated the escape plan better, because “Fists of Steel” Korra accidentally fucks up the airship that they’re on so much that it crashes into the middle of the desert, leaving Korra, Asami and the Earth Kingdom crew at the mercy of heat, thirst, and what turns out to be a giant sand shark. Damn, Korra. That’s a real Zuko thing to do.

Meanwhile, Bolin’s efforts to befriend Lava Guy and Water Arm Girl—Because that’s what he does! Because he’s a puppy!—are cut short by Zaheer giving Mako and Bolin (who know where the stolen airbenders are, after all) to the Earth Queen. In exchange, Zaheer will take Korra, thus helping the Earth Queen avoid a major diplomatic incident. Only the Earth Queen neglects to mention, uhhhh, we don’t actually have Korra quite yet—another airship is en route to the busted one to retrieve its passengers, but Korra and Asami aren’t exactly waiting around to be arrested again.

Asami’s taken control of the entire situation, winning the allegiance of the Earth Kingdom guards with her engineering knowledge and her amazing hair care regime. They all work together to rebuild the ship, because not even the guards want to risk getting eaten by a giant sand worm before their rescue ship arrives. Except then the shark eats the ship. So. That sucks. Asami, who’s really been ON these last few episodes, suggests using the remaining scraps to make a sand glider, of the sort we saw in that Avatar episode when those bastards bisonnapped Appa.

(Side note: Now that we’ve moved from Asami having no screen time to Asami actually doing shit, I hope we get to the point of Asami having … like … actual, three-dimensional characterization, again? She’s moving a bit into Look At This Strong Female Character We Have Made – She Is a Character and Also Female But Most Importantly Strong mode. I like that she’s being heroic left and right, but that’s not a sufficient substitute for her, y’nkow … expressing opinions and thoughts and things like that. I like quiet and competent characters who get shit done in the background–like Wedge Antilles in Star Wars or Gaeta in BSG, except he kept fucking everything up like the unicorn glitter whirlwind of bad decision making that he is–but I’m feeling lately like the writers are just bringing Asami in when they went a Girl Power moment. We get a ton of little character bits from Mako and Bolin. That said, I acknowledge that supporting characters are always engaged in a necessary juggling act for screen time, so hopefully we get some more meaningful Asami moments soon.)

Back in Ba Sing Se, Mako and Bolin are chilling in a prison cell; Mako’s trying to do some cheesy I BELIEVE IN YOU BOLIN THIS IS YOUR MOMENT inspo speeches to get Bolin to metalbend them free, but this is not an ‘80s movie and so it does not work. Mako would make a shitty Burgess Meredith, anyway. Zaheer, creeping around like he does, overhears that Korra’s still at large and goes with his crew to confront the Queen about it. She goes full haughty prick mode, stopping just short of calling them peasants a la Tumblr c. 2013. “You wouldn’t dare attack the queen!,” she yells. “Maybe I forgot to mention something to you,” Zaheer responds. “I don’t believe in queens.”

So then Zaheer kills her by literally bending the air of her lungs, which is … horrifying. YOU HAD TO GET THAT SHOT OF BULGING EYEBALLS IN THERE, KORRA? DIDN’T YOU? 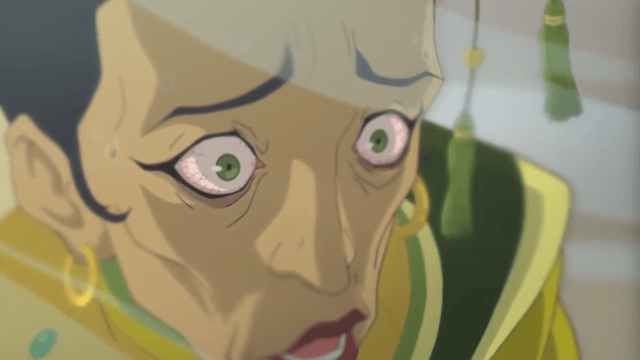 Then he hops on the PA system to announce to Ba Sing Se that he offed their monarch, so “24/7 PARTY, PEOPLE, WOOOOOOO!” Gotta respect him for not trying to be all sneaky and blame someone else. He may be a crazy fundamentalist murderer, but he has the power of his convictions, God dammit.

Lava Dude brings the wall between the one percenters and the hoi polloi, and the class war commences. Zaheer frees everyone from prison except Mako and Bolin, whom he tasks with delivering a message to Korra. Presumably that message is “TOTAL ANARRRCHYYYYYYYY,” as shouted by Joe Mantegna in Airheads. Or maybe it’s not. I just really like Airheads.

Meanwhile, Korra, Asami, and Asami’s new fan club are escaping from the desert on the sand glider. There’s a bit of a sand shark situation, but Korra deals with it. 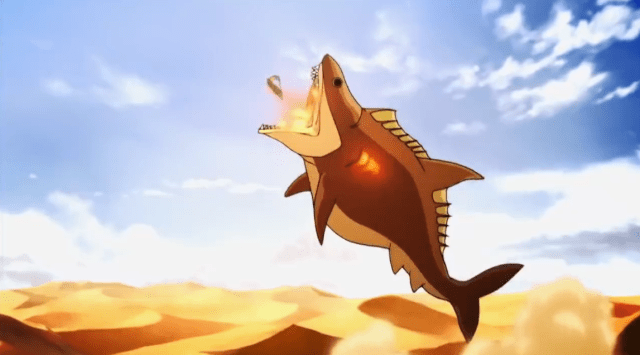 You need an Alka Seltzer there, little buddy?

They make their way back to the Misty Palms Oasis, where the captain of the guards decides yeeeahhhh, maybe he doesn’t want to be involved in the great Earth Queen vs Avatar rumble in the jungle, so he’s gonna GTFO now, thanks. However, their party grows again almost immediately, as it turns out Lin tracked Team Avatar from Zhao Fu and is there waiting for them. Ditto Tonraq and my main man Zuko, who parked his dragon outside like it ain’t no thing. “Hey, what’ve you guys been up to?” “Oh, just captured by an enemy kingdom. Then there was a plane crash. Oh, and we got chased by a giant shark. You know. Tuesday.”

Everyone gets caught up on the situation: Mako and Bolin are captured, the Earth Queen is dead and Ba Sing Se has gone full Escape from New York. Wonderful.

I wonder what think Zuko’s gonna try to do to help next episode, only he totally fucks it up. Gonna be fun. Looking forward to it. 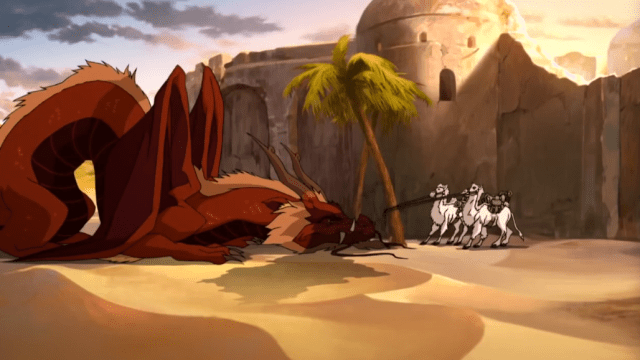