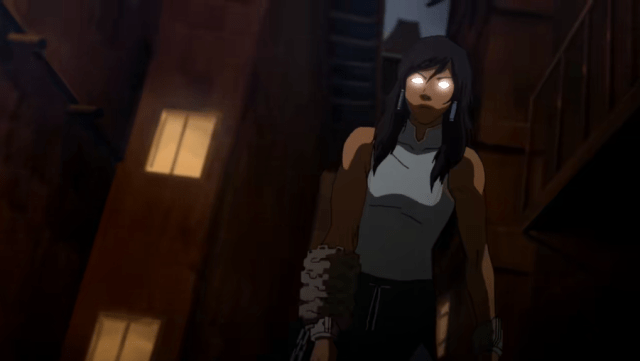 We start with Korra gazing into a broken mirror—very Azula of you, good times—in the aftermath of the MMA beatdown that ended last week’s episode. Basically, life sucks, everything’s awful, and Korra’s being stalked by a evil doppelganger version of herself that’s also possibly a hallucination. 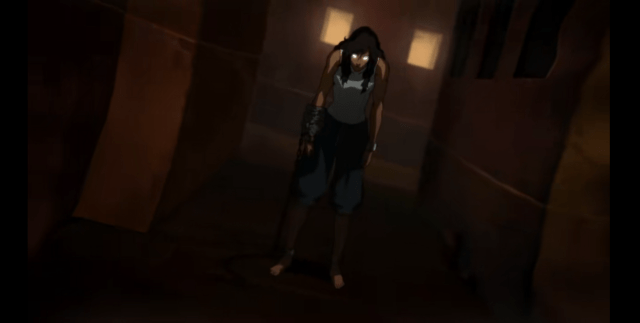 Not creepy at all, thanks. Where’s Iroh to give a maddeningly cryptic lecture on integrating different elements of your personality when you need him?

It’s now time for a FLASHBACK

to Korra immediately post-poisoning, as she says her farewells to Team Avatar before shipping off to her dad’s place for some R&R. Bolin’s just excited to have a penpal, and Asami is more than willing to go with her, wink wink nudge nudge hands on shoulder sexytimes. 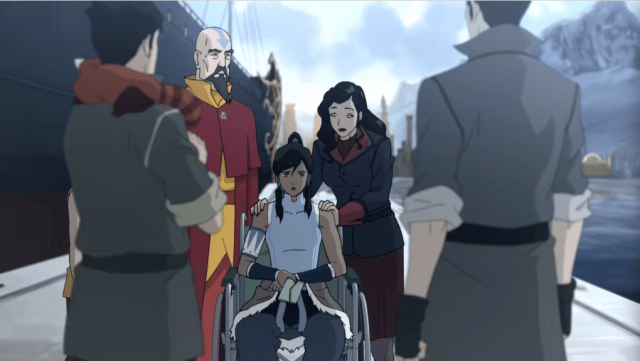 Tenzin assures Korra that they’ll have the keeping-the-world-in-balance situation more than handled while she’s away, so she can focus on her recovery. My first impulse is that that’s the sort of statement that, while well-intentioned, could lead to angst of the “the world doesn’t even need me, I’m useless and alone” George Bailey variety. Look, I’m just saying I know how the Avatars love their self-loathing. But for now, Korra’s off to do some much-needed physical (and psychological) therapy with none other than Katara.

(For my own sanity, I’ll be recapping this episode chronologically, rather than jumping back and forth between different time periods, as the episode does itself.)

Katara, as is her wont, lays down the truth: Korra’s been through some shit, both physical and mental, and recovering won’t be easy. I’m trying to figure out a joke to write here but Korra essentially has PTSD, so I just can’t do it, man. Mako ain’t good with the jokes, either. In one of his letters: “I’m not very good at writing letters. It’s 2:15 in the afternoon, weather is fair, chance of snow showers later today. But enough joking around.”

… God dammit, that’s a funny joke about his his lack of a sense of humor, though. Boy’s got layers.

There’s also a reference to a “Red Monsoon hideout,” which sounds like it could be relevant later on. Bolin’s letters are purple prose-y and wonderful (“My dearest Avatar Korra. Though several fortnights have passed since your departure to convalesce in the homeland of your tribesman, I feel our friendship knows neither time nor distance.”), but my favorite of Korra’s correspondences is with Asami, to whom she pours out her heart and angry bisexual soul about her recovery process and how she can no longer enter the Avatar state. “Don’t tell Mako and Bolin I wrote to you and not them,” writes Korra. “It’s easier to talk to you about this stuff. Also, uh, you seeing anyone? No reason.”

With Katara’s help, and after a lot of hard work, Korra eventually starts recovering, but it takes a lot longer than she thought it would. At one point Tenzin comes to visit, and Korra wants so badly to show him that she’s back in top form and can go back to Avatar-ing, only she has a flashback to Zaheer almost killing her while sparring. Tenzin gives Korra a pep talk. Korra gives Tenzin a bitch face. 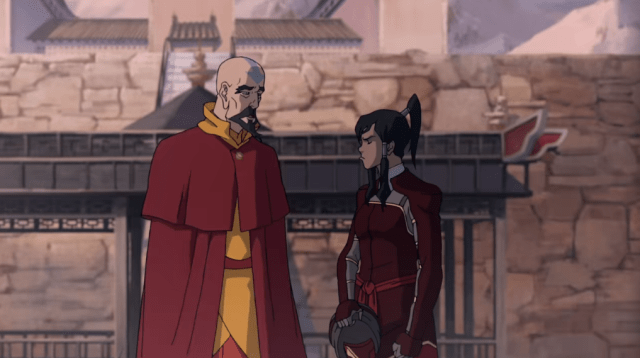 Eventually, Korra comes to the conclusion that she can only stay sequestered away at Club Med for so long—she needs to get back to Republic City, where being surrounded by her friends and back in the thick of the action will in theory help kickstart her recovery. It makes sense: Korra’s always been more of an action gal than a sit-around-and-meditate gal. She sets off on her own, and it’s nice and calm until, whoops, she’s in a situation where she has to take down two random punks and completely fails at it. After that, she spends a lot of time wandering around; it’s during these travels that she first sees Dark Korra. Keeping with the Zuko-ness, she cuts her hair, signifying the birth of a new Korra. She got a pretty cute bob from just one slice, too.

Korra makes the intelligent tactical decision (… I shouldn’t be surprised, right? I’m not surprised. Really.) to go back to the Tree of Time and do some meditating, in the hopes that she’ll somehow renew her connection to her past lives and/or reconnect with Raava. She meets a cadre of cute little spirits, who offer to help her, but there’s not much they can do. Instead, she wanders around some more, eventually ending up in the city she was in at the beginning of this episode. We find out that, when she was fighting that earthbender, she actually thought she was fighting Dark Korra, who showed up in the city and led her into the ring. Korra decides, fuck it, if she can’t solve the problem by meditating, she’s sure as shit going to go with her normal first resort, which is punching people. So it turns out the fight was a one-time thing, instead of Korra earning dough on the regular by going all Fight Club. Sigh. We can’t have everything.

At about this point, we circle back around to the present: Korra gets defeated by Dark Korra in the ring, then sees Dark Korra again afterwards. The spirit Korra met at the Tree of Time, masquerading as an adorable puppy, shows up and leads Korra into the woods to find someone. Swamp Thing?!

In the swamp, Korra has another fight with Dark Korra, which leads to Korra getting her ass kicked aaaa-gain. For a second there I thought Dark Korra was the “person” Korra was supposed to meet, and the spirit was pulling some “FFS clearly there is some lesson you need to learn here about ~*~accepting yourself~*~ ~*~what it means to be the Avatar~*~, so just sit down with this other you and have a talk. Always with the punching!” But, in this case, it looks like “punching people” is the right option, because Dark Korra is a straight-up dick who drags Korra into a puddle of that freaky silver poison. It’s not really poison. It’s metaphor poison. Anyway. Korra wakes up in an underground cave, where she finds the person she was really meant to meet … 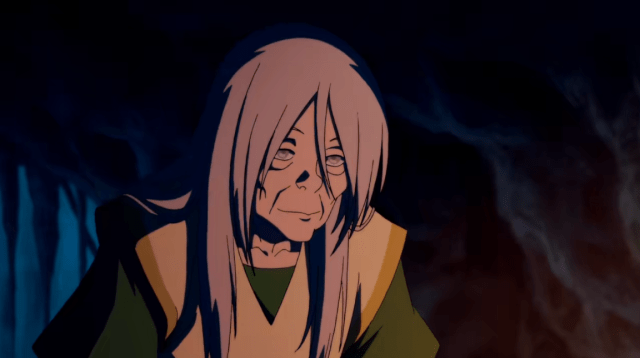 Confession: I did know Old Toph was going to be showing up, though I didn’t know it was in this episode, and I didn’t know it was her the puppy spirit was talking about. Pretty sure I was working at TMS when this season aired, so it was kind of impossible for me not to know. It was no less joyous a reunion for having been spoiled for it. Toph would fuck off from her entire family to live in an underground cave for decades. 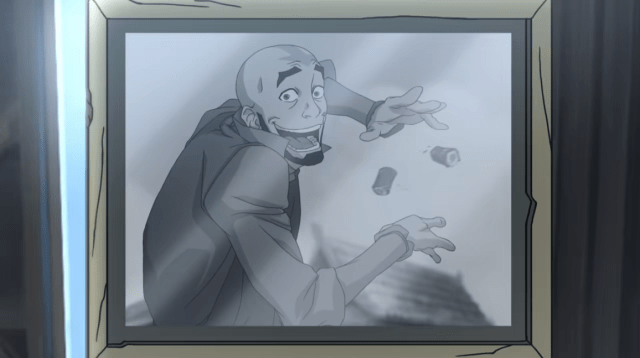