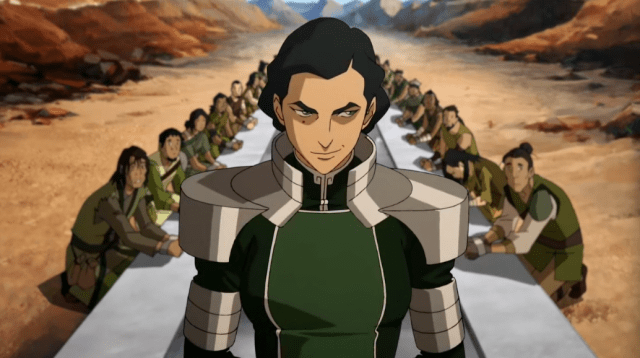 Henry Rollins is imprisoned, long live Henry Rollins! Let’s see what season four of Korra has in store for us, shall we?

First up: Time jump! It’s been three years since season three ended, and Team Avatar has scattered to the winds. Asami is back to running Future Industries in Republic City, helping to whip her hometown into a model of human/spirit cooperation. Mako has been assigned to bodyguard detail, his charge the about-to-be-coronated new Earth King, Prince Wu. Bolin is working with Kuvira, aka “The Great Uniter,” to try to bring the Earth Kingdom back together after Zaheer anarchy’d it last season. Tenzin and the other airbenders zoom around in sweet base-jumping outfits solving people’s problems. And Korra is …

This episode, as befitting a season premiere, is a lot of set-up, but there are a few individual moments of awesomeness that I would like to point out. Asami wears a CAPELET: 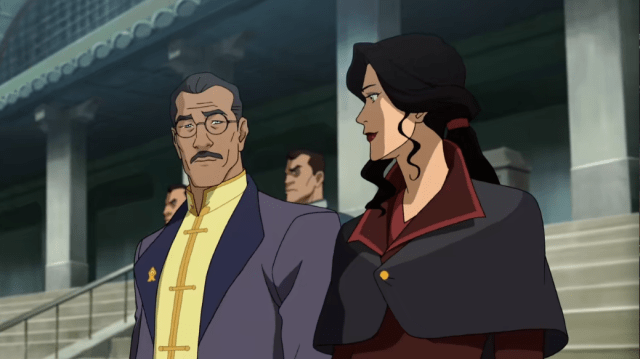 ..and sports her very best “Keep your heterosexuality away from me, you gnome” face when Prince Wu hits on her: 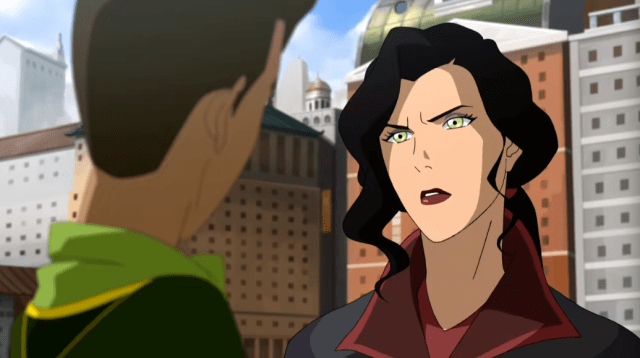 Lin’s response to Wu expressing trepidation about being coronated in a kingdom that all too recently went all French Revolution is “Well, you probably won’t be assassinated,” which is everything I’ve come to expect and love about Lin.

Meanwhile, Kai and Opal roll into an Earth Kingdom city and fuck up some bandits, only it turns out the city’s kind of overrun by bandits and the Governor’s not particularly pleased that two pre-teens are the only people the Air Nation could send. Speaking of bandits, Kuvira—with Bolin, mah boy Varrick and Su’s son Bataar—is rolling around the Earth Kingdom on their great Reunification Tour when they’re attacked by a group of bandits. Rather than delegating bandit management to her guards, Kuvira decides to go outside and deal with them herself, because that’s the sort of thing you do when you have flashy, awesome eyebrows like hers. She deals with the bandits and gives them the opportunity to pledge their allegiance to her. If they don’t, she’ll just leave them tied to the tracks to be run over by the next train that comes along, but like whatever, no big, that’s still a totally valid option. They go with door number one.

Kuvira’s faction shows up in the city Opal and Kai tried to take care of, only the Governor isn’t too pleased by his ostensible great savior’s arrival. See, Kuvira’s been going around the Earth Kingdom and strong-arming states into pledging loyalty to her, making her ruler in all but name in exchange for food and protection from the bandits. Also … she’s the one hiring the bandits, right? That’s understood? Her guards LITERALLY LOOK LIKE STORMTROOPERS; the show is not exactly being subtle about the fact that she’s all kinds of evil: 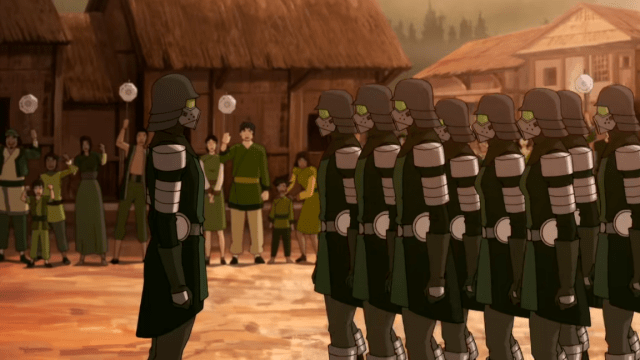 The Governor, Opal and Kai all see through Kuvira’s shady shit, but Bolin’s completely loyal to her, because A) he’s a Hufflepuff, and B) Kuvira talks a big game about helping people, which Bolin is all about, BECAUSE HE IS A HUFFLEPUFF. I’ll be interested to see how this plays out, because we’ve been down the “Bolin is loyal to an obvious villain but doesn’t realize it because he is gullible and dumb” road before, with Varrick. Will we find out that he’s learned something since then?

Kuvira, her offer of fealty rejected, leaves town, but not before telling the Governor that she’ll wait at the border for one day in case he changes his mind. COMPLETELY COINCIDENTALLY, when Opal and Kai collect emergency food stores for the village, they’re attacked by food-stealing bandits, so the Governor has no other choice but to sign Kuvira’s contract. His people are starving, so. Kai and Opal have a nice chat about the strains of their respective long-distance relationships: His with Jinora, hers with Bolin. I know I have not exactly been Kai’s number one fan, but I always appreciate a good platonic male-female friendship, so I’m down with these two being buds.

Back in Republic City, we learn that there are some people who support Kuvira over Prince Wu to lead the Earth Kingdom. Mako is so good at protecting Wu from these evil fiends’ nefarious pie attacks that Wu requests Mako as his permanent bodyguard. This means he can’t go back to being a detective after Wu is coronated, to which Mako’s reaction is basically:

Meanwhile, Tenzin and his brood are looking forward to Korra arriving from the South Pole. Tenzin’s faaaaace. 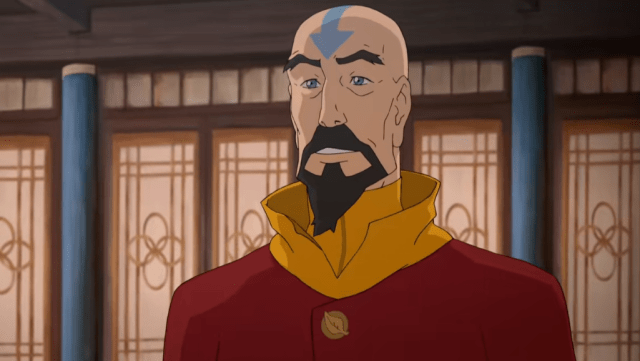 What a ball of bald sunshine!

Only, when the ship that Korra’s supposed to be on arrives, Tonraq steps off and tells Tenzin, wait, I thought Korra was with you? Like a teenager who wanted to do something shady but needed cover (… EXACTLY like that, actually), Korra left home six months ago and has been sending her father letters saying she’s in Republic City. So where has she been all this time? 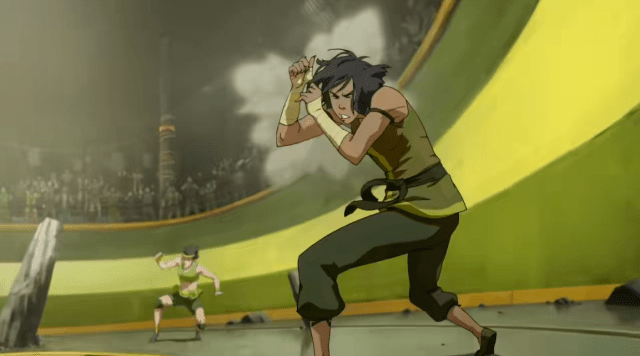 Yup. Korra’s been trying to get her groove back by punching things, which is very, very accurate to character. Unfortunately, her future in MMA isn’t exactly great, as the final scene shows her getting her incognito ass thoroughly kicked. 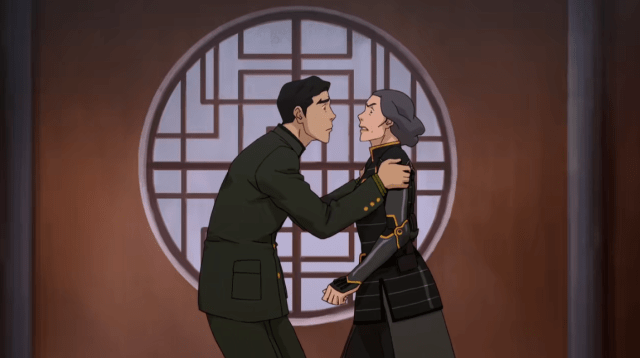