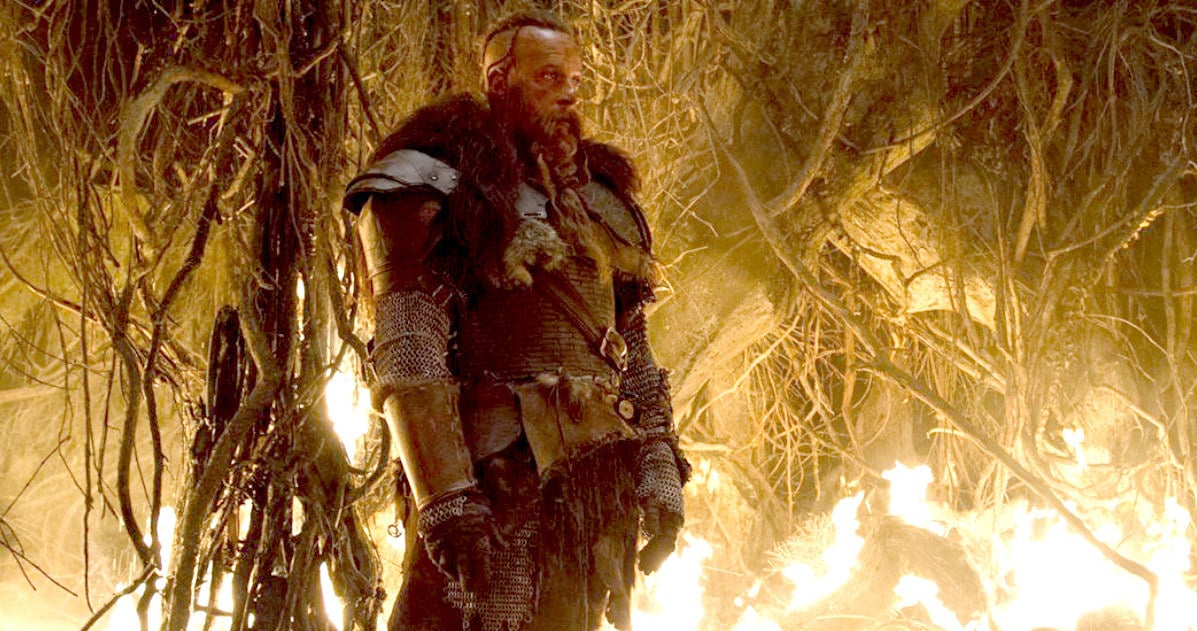 I can say this for The Last Witch Hunter: it made me appreciate three movies slightly more than I did before. Pretty early in the movie I wrote the note “I wish this was more like Season of the Witch,” a thought I never imagined I would have. Second, I wrote “Highlander did it better.” And third, I have never felt this bad watching Michael Caine in a movie …and I’ve watched Jaws 4. So congratulations, The Last Witch Hunter. You definitely helped me put some other movies into perspective. You are most definitely one of the worst movies I’ve seen this year; go sit in room 101 with Fantastic Four and Pixels and think about what you’ve done.

I have to be honest about something regarding this movie. I had the choice between seeing two screenings on the same day. And I have to admit to picking The Last Witch Hunter. Therefore, I have to admit to choosing to watch this terrible, TERRIBLE movie. And I’m issuing a warning to you based on that confession: don’t make the same mistake I did. I really tried to put myself in the right state of mind to get into this movie. I was properly caffeinated, the theater was full, and clearly a lot of people around me wanted to be there and have a good time with a good old fashioned silly movie OR have a good time at a trashy movie. And then, this movie started. And the mood in the theater completely changed. This movie is trash, but there is no fun to be had from it. And I don’t just mean just the bad story (which is terrible) but the acting and simple technical quality of the movie is just relentlessly bad and/or dull. And if you’re hoping for so bad it’s good or silly fun for this Halloween, you couldn’t pick a worse movie. There was literally ONE laugh in my theater, at that tired old joke when one woman says a snappy insult, and the other woman responds by calling her a bitch. HILARIOUS right? That is how desperate the theater was for a single laugh. If you want silly fun, go see Goosebumps, if you want silly horror, go see Crimson Peak, if you want horror, you can probably wait a week and see the other movies coming out next week (I haven’t seen them yet, but they have to better than this mess).

The Last Witch Hunter is never, EVER, EVER scary. Well, Vin Diesel’s beard is kind of scary, but that doesn’t really count. And I should mention, all that old timey, middle ages stuff in the trailer is just the opening of the film and some really poorly done flashbacks. This isn’t Highlander, which actually did mesh to periods together to create a strong narrative and characters…not by far. And I know Highlander (a movie I honestly do like a lot) isn’t Citizen Kane or some other classic, but compared to this movie, it is a masterpiece of a specific kind of fantasy-action movie. As for the Season of the Witch comparison, which also isn’t a good movie, it has a couple of things going for it this one doesn’t. One, a pretty amazing performance by the actress Claire Foy, and committed yet misguided performances from Nick Cage and Ron Pearlman. Vin Diesel can act, but more importantly, he has a specific kind of “action hero” charisma. We all saw it in the Fast and Furious movies. And yet, he is dreadful in this. With the exception of two emotional scenes, he is just robotic and monotone during the film. It felt like he didn’t even want to be in this movie (a movie he produced by the way). And, he isn’t connecting with any of his costars.

Which brings me Rose Leslie. Leslie is pretty good in this movie (her first major film!) as the witch Chloe. She seems to be connecting to the character and into the limited mythology we are given, and she’s clearly having a pretty good time. I’ve seen her on Game of Thrones and Downton Abby, and if you haven’t seen her in the horror movie Honeymoon, that would be a better choice this Halloween as a rental.

Although I like that Elijah Wood has become interested in doing horror movies now, but so far, his choices are questionable, and he and Diesel have none of the buddy detective qualities they try to push on us. Wood disappears a lot in this movie, so when his character has a “twist” I just thought, that character has not been built up enough to justify that level of stupidity. Like I said, Michael Caine’s presence in this movie just made me feel sad. He is so lifeless in his performance and doesn’t seem to even understand the narration he has. He made me think “maybe he should be doing fewer movies,” and I hate myself for saying I was kind of happy when they killed his character off so I didn’t have to watch him struggle.

The general lack of joy and excitement from the performances is one problem (it’s a pretty big one for this kind of movie), but the movie its self has a general lackluster look and feeling throughout. The CGI is totally bland. The hue on all the flashback sequences is just gross. If this is Diesel’s happiest memories, why not use vivid cinematography, rather than make everything look washed out (just as it does during most of the CGI heavy scenes). And for a movie about witches and magic, there are only two, completely wasted, scenes that show magic can be kind of fun and colorful. I don’t want to get all political, but the weird pro-police state sentiment is just bizarre. Most of the witches we see seem perfectly nice, but they need to be kept in line by Diesel’s Kaulder because they seem to have no idea how dangerous their powers are. Really?

By the way, witches, who have superpowers, seem to be powerful against everyone except immortal (but human) Kaulder. He can literally punch them into submission with his super fists. At this point Diesel’s superhuman qualities as an actor are pretty boring to watch on screen. And his fighting in this movie is atrocious considering we know how capable he is. Remember how stupid but fun that “who has the bigger pipe” scene was in Furious 7? How much joy audiences had seeing him do real stunt fighting with Jason Statham? There is nothing like that in this movie. All the fight sequences are terribly choreographed, and shot in such bizarre close range, that you not only can’t see the fighting, you can’t see what is happening or who is doing what. Which makes these extended scenes boring. Oh, and after all that, just being able to shoot a witch is pretty anti-climactic. Maybe tell Chloe, “Hey, if you get a chance, you can try to shoot her too?” Not just saying “I have to do this alone” and walking away.” Our “hero” is an idiot.

The screenwriters complicate the story by piling on rules and twists as the movie goes, making it pretty much impossible to follow, and the dialogue is constantly poor. Jokes aren’t just unfunny-they are non-jokes delivered in an inflection to make them seem like jokes to the audience this movie detests. Some of the “banter” doesn’t even make sense. And the character development (or lack thereof) is pretty atrocious, creating nothing more than empty vessels the actors could never fill even if they put all their charm and personality into their characters they possibly could. This movie wastes a lot of time on unsuccessful world-building, but never justifies why we should care about Diesel’s character.  As a result, all I cared about was getting to the end of this unbearably long movie (it’s only an hour and forty-five, but it felt closer to 2-plus hours).

The producers clearly feel (or hope) this movie has legs to be a franchise, and as a result, one of the worst movies of the year compounds its terribleness with a a cliché, disappointing ending. The Last Witch Hunter has little ambition or originality behind it, and it shows.