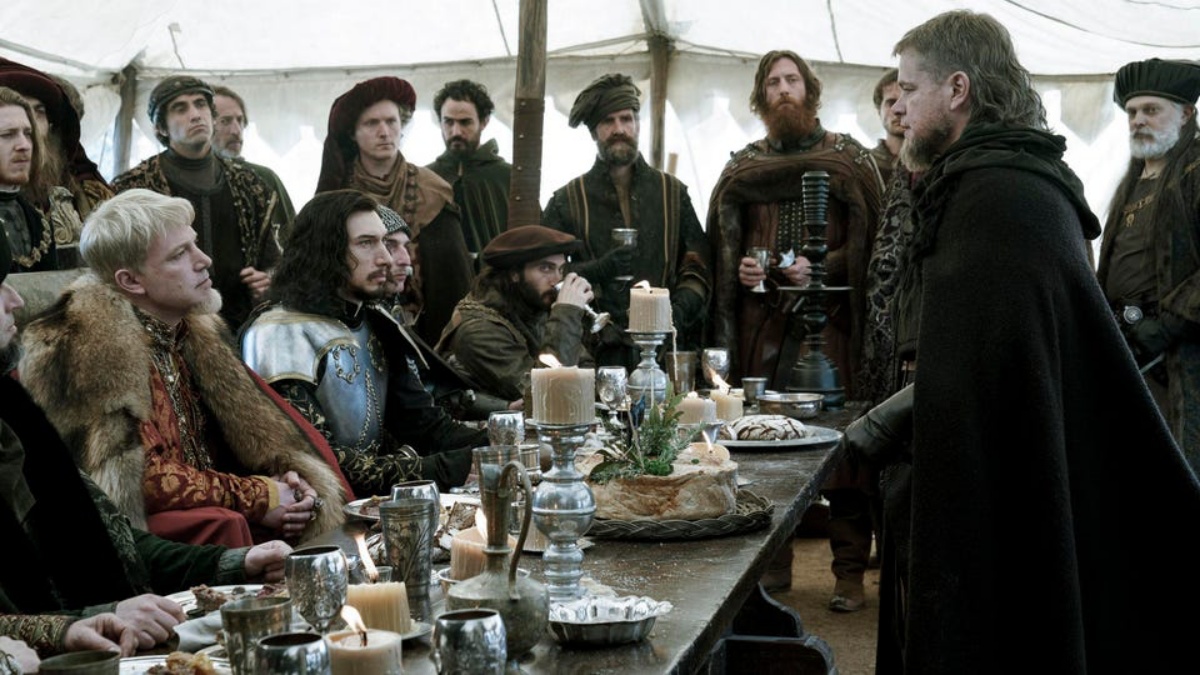 Ridley Scott’s The Last Duel has underperformed at the box office, despite being a well-acted story. One of the failures, however, happens to be in the film’s breakdown into three chapters.

The Last Duel brings to life the historical duel between Jean de Carrouges (Matt Damon), a stubborn knight who challenges his former friend, the squire Jacques Le Gris (Adam Driver), to a duel to the death after Carrouges’s wife, Marguerite (Jodie Comer), accuses Le Gris of raping her.

In Chapter One, we get de Carrouges’ story, which shows him to be a loyal knight who is constantly wronged by the world. His first wife and child die, his new wife’s inheritance is sold off partially to pay off old debts, and he risks his life in war only to come back with little money. During one of these trips away, his new wife, Marguerite, is raped by Le Gris, who has grown favored in the court of Count Pierre d’Alençon (Ben Affleck). Le Gris is de Carrouges’s former friend and has gained favor, while de Carrouges has only managed to weaken.

Chapter Two gives us Le Gris’ perspective as a political player, bonding with Count Pierre through hedonistic sexual adventures. When Le Gris meets Marguerite and they share a kiss that de Carrouges orders as a symbol of friendship, it is meant to start a courtly love story in which he grows infatuated with Marguerite and they have sex.

During the rape/sex scene, Marguerite gives what are described as “mild objections” because she is a noblewoman and, therefore, has to protect her honor. But it is portrayed through Le Gris’s eyes as a courtly game.

Except it still looks and functions as a sexual assault. A woman says no, and Le Gris, due to his own desire, plays this “game” simply because of them sharing one conversation where Marguerite is Not Like Other Girls™ cause she reads books.

Finally, in Chapter Three (The Truth), we get what we are supposed to see as the reality of the situation, which is that Le Gris raped Marguerite violently. Thankfully, it is much less violent than what was recounted in The Last Duel: A True Story of Trial by Combat in Medieval France by Eric Jager.

While there are some moments that are really well done and make the different perspectives worth looking at, when it comes to the rape itself—the reason for the story—in watching it twice, it doesn’t actually do much for the viewer. If anything, the fact that Marguerite’s perspective is last, and overshadowed by the duel itself, does a disservice.

So much of the film is about the men, when Jodie Comer’s character is the one put in front for being brave. Even the taglines of saying she defied a nation seem so bitterly overblown when, in the end, the storytelling doesn’t allow her to be at the forefront as much until the bitter end.

Rashōmon, the classic film this film has been compared to, doesn’t have a singular “truth,” which is why the use of multiple perspectives works. With The Last Duel, we are told the truth, and history has chosen its side—Marguerite’s truth, and she should have been the voice of the story.