Rumor of the Day: Is This What Smaug Looks Like?

Welcome to the week after April 1st, where a portion of the stories are made up and the points don’t matter. It began in many ways, but not least among our interests with a claim by tabloid The Daily Express that a “mole” in the production of Doctor Who had told them they could confirm that the Doctor would regenerate into a female body for his 50th anniversary episode in 2013 and that she would be played by Lara Pulver (famously of Moffat’s Sherlock).

Now, even if you set aside the fact that that’s over a year away, and that folks in the production keep maintaining that Matt Smith has no intentions to leave the show any time soon (despite persistent rumors), there’s still the fact the gap between when we heard the Doctor was going to have a new companion, and when we heard that Jenna-Louis Coleman was cast was months and months.

So you could forgive me for looking at the claim that the design of Smaug has been revealed by a sweatshirt patch from a months old The Hobbit production video with a ton of skepticism and even out right non-belief.

But upon closer look I think it’s actually… reasonable.

See, what we have above is Smaug the Golden, by John Howe, one half of the duo of fantasy illustrators who’ve created all the creature and armor concepts for The Lord of the Rings movies and are back to work on The Hobbit. Note the pointy face and floppy, frilly spines. Here’s another of Howe’s dragons:

Here’s the patch, reportedly seen on The Hobbit crew: 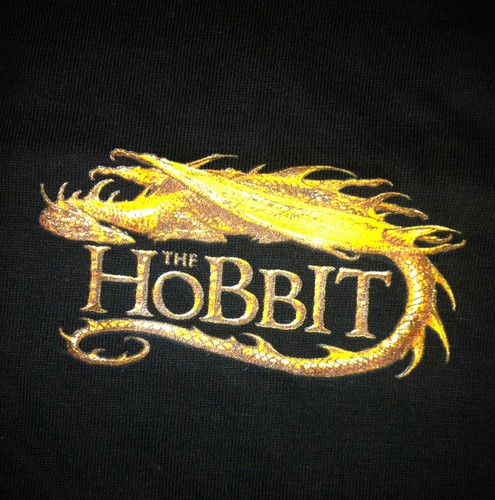 So, Howe could have designed a dragony patch for the official sweatshirts, influenced by his own previous ideas of what Smaug looks like. Or he could have designed a patch specifically based on the design for Smaug that’s already been created even though he might not even appear in the first film (although I hope he at least has a cameo or post-credits scene or something because I don’t want to wait that long).