The Hate U Give Review: Everyone Must See This Movie 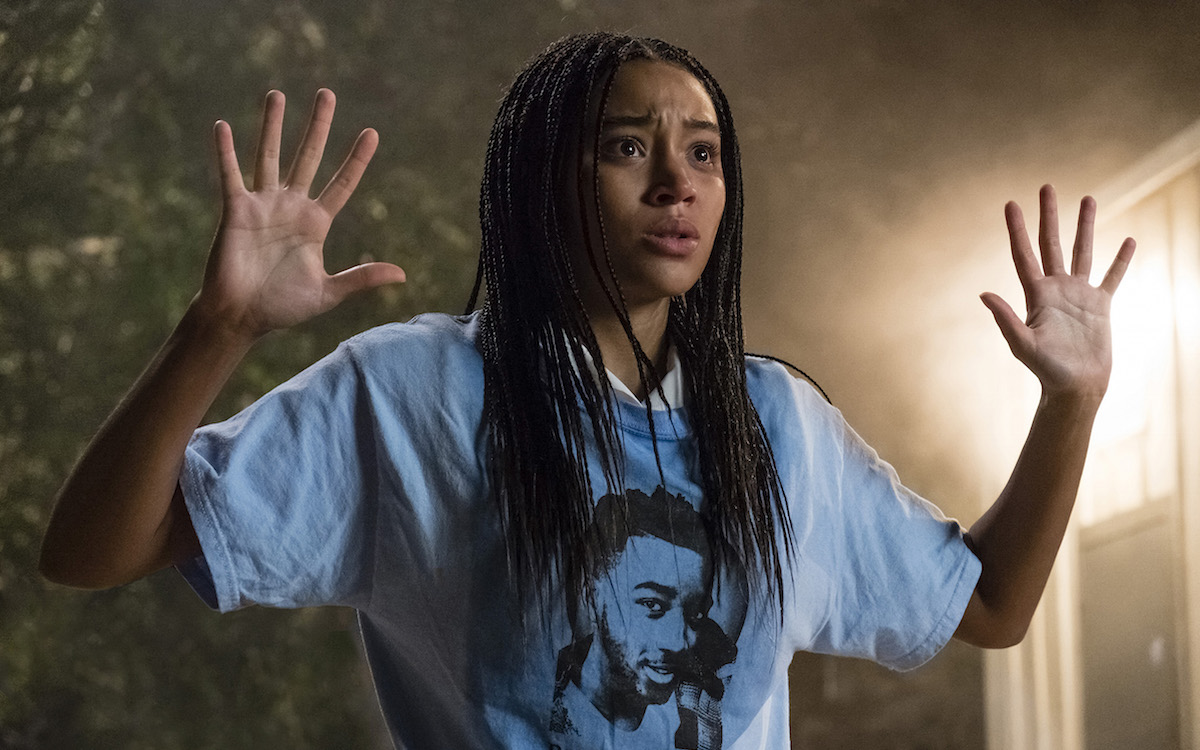 In the 84 weeks since Angie Thomas’ The Hate U Give was published, the novel hasn’t left the New York Times’ YA Bestsellers list. (Indeed, it’s spent the vast majority of those weeks in the #1 spot.) On top of being a flat-out great book, it’s also undeniably an important one. Despite an uptick in the number of incredible YA books to come from writers of color over the last few years, it’s still a genre dominated by white authors and white characters. The extreme popularity of Thomas’ novel proves that young readers were craving this story–a brutally honest attack on racism and systemic injustice.

The Hate U Give opens with a nine-year-old Starr (later played to perfection by Amandla Stenberg) being given The Talk by her father Maverick (Russell Hornsby). Put your hands on the dashboard, don’t argue, no sudden movements. As Starr sits listening with her older brother Seven and her then-infant brother Sekani, Mav makes it clear that as horrible as it is that children need to hear this speech, it is not a lesson they can ignore.

As a teenager, Starr is torn between two worlds. She lives with her family in Garden Heights, known for its gangs and crime. By day, she attends private school in an affluent, nearly-all-white neighborhood. The split means she essentially has two different versions of herself that she has to keep constantly in check. She can’t be prep-school Starr at home, and she can’t bring Garden Heights Starr into Williamson. That schism requires a lot of work to maintain on a daily level, but it also means that when things get dark for Starr, she finds herself even more isolated than she might otherwise be.

When attending a Garden Heights party, Starr runs into her childhood best friend and first crush, Khalil (Algee Smith), with whom she’s largely fallen out of touch. (The third in their childhood friend group, Natasha, was murdered in a drive-by shooting in front of Starr when they were young.) A fight breaks out at the party, guns are fired, and Khalil rushes Starr out and into his car. The scene between the two old friends is sweet as they find their bond is still strong, and they even share a kiss. Starr has a boyfriend, but Khalil isn’t phased. They have their whole lives ahead of them, they’ve got time.

But when Khalil is pulled over for “failing to signal a lane change,” he doesn’t abide by the rules of The Talk. He argues with the white police officer, gets pulled out of the car, and when he reaches back in for his hairbrush, the cop mistakes it for a gun and shoots without warning, killing Khalil.

That scene is painful, but what unfolds over the rest of the film is no less intense. The movie is a lengthy 132 minutes, and from the moment Khalil is killed, it is a nonstop onslaught of emotions. Stenberg is onscreen nearly every minute of that runtime, and they carry the movie brilliantly. As Starr, Amandla is a raw, seething mass of pent-up, locked-jawed pain.

As the only witness to Khalil’s murder, Starr has to navigate the obligation she feels to share his story with the very real danger of making her identity known. The neighborhood is run by the King Lords gang (headed by Anthony Mackie’s King) and by their rules, she can’t be talking to the police or the media. Meanwhile, she’s still trying to keep Garden Heights Starr out of Williamson, something that’s now proving to be impossible. She starts pushing back against her “I’m not racist, you’re just sensitive” best friend, and her white boyfriend, Chris, definitely doesn’t understand what she’s going through, but he’s genuinely trying to figure out how to be an ally to Starr. Both of those points are heavily condensed from their roles in the book, especially Chris and the guilt Starr feels over dating a white boy. But the points are still made and they’re sidelined only to make room for the more important story.

Starr’s struggle is rooted in her need to defend and get justice for Khalil, but she’s not blind to the systematic patterns of injustice that led to Khalil’s death and she knows the fight goes beyond just one boy. The Hate U Give is a film for the Black Lives Matter movement. It doesn’t shy away from talking about real-world murders, from Tamir Rice to Emmett Till, and the very title is a reference to Tupac’s notion that “thug life” stands for “the hate u give little infants fucks everybody.” It’s an idea that is heavily, repeatedly discussed in the film–the “conveyor belt” that is laid out in front of black people, especially but not exclusively poor black people, from birth, in a world where their skin color is essentially criminalized. Khalil was not the “perfect victim.” He was a drug dealer, and though that played no role in his murder, it was inevitably used to justify his persecution for his real crime of being born black. As Issa Rae’s character, an activist and Civil Rights lawyer, says (quoting Reverand Traci Blackmon), “It is impossible to be unarmed when our blackness is the weapon that they fear.”

In dealing with such weighty issues, it is inevitable that the movie does sometimes feel educative, although it never veers into preachy or PSA territory. But even for anyone who wishes the film had more subtlety, or had some sorts of twists or surprises (it doesn’t, it is deliberately straightforward), we can’t forget that while the film is a powerful watch for audiences of any age, it is still heavily rooted in its Young Adult source material. It’s not a movie made exclusively for young people, but it definitely puts young people at its center, both in terms of its characters and the conversations it’s designed to spark with audiences.

Similarly, while this is a distinctly important movie for black audiences, it is a must-watch for white audiences as well–for anyone, really. Take yourselves, take your families. The Hate U Give is 2+ hours of brutally hard, necessary truths. The fact that it’s also a genuinely great movie is just icing.

Amandla Stenbergmovie reviewThe Hate U Give