In This Music Video, Time Traveling Riot Grrls Fight the Patriarchy! Or, How I Turned My Book Into a Band

I always knew I wanted to make a music video for my novel The Future of Another Timeline (coming Sept. 24!). The book is a time travel thriller set partly in 1992, where a riot grrl named Beth stans for Grape Ape, a group of ass-kicking Latina feminists who sing about patriarchy and racism. I based the style of Grape Ape’s lead singer Glorious Garcia on my friend Desi López. Desi writes songs in English and Spanish that give off the energy of a trippy Star Trek episode where the aliens have sparklefangs, dance fights, and telenovelas.

My novel takes place in a slightly different timeline from our own. It’s a world where women and freed slaves got the vote at the same time in the U.S., instead of freedmen getting it in 1870 and women in 1919. As a result, several things happened. First of all, Harriet Tubman was elected a U.S. senator in the early 1870s, which many historians believe she would have if women had gotten the vote. After all, she was a decorated war hero and a beloved public figure.

My alternate history also meant that the abolitionist and women’s suffrage movements—close allies before the Civil War—were never split apart. Intersectional feminism was born in the nineteenth century, instead of over a century later. And that leads to a 1990s riot grrl scene full of successful bands fronted by women of color and immigrants. Like Grape Ape! 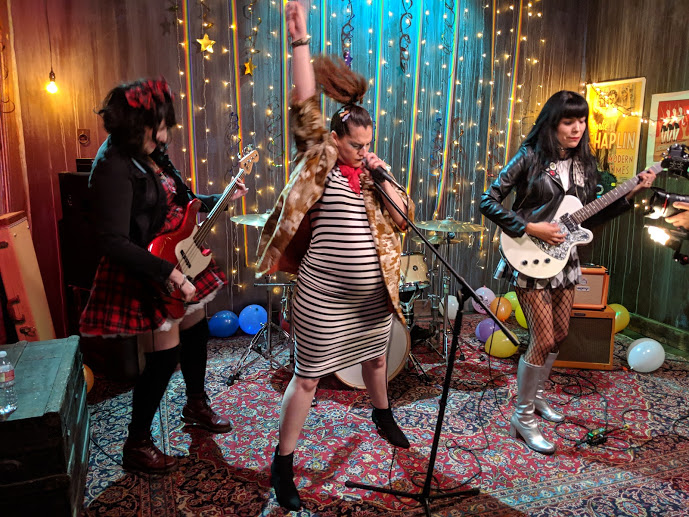 But back to our timeline, where we have toxic white feminism and Harriet Tubman wasn’t even given a pension despite serving her country in the Civil War. I desperately wanted Desi to write and perform Grape Ape’s signature song, “What I Like to See,” so I showed her a half-baked early draft of the book. I explained how the song comes at a key time in the story, and helps Beth keep her sanity despite repeated visits from a mysterious time traveler, a best friend who keeps murdering rapists, and a father who abuses her.

Luckily, Desi was excited about the idea and we started to plan.

As soon as I had lyrics, Desi started writing music. She and I share a love for early 90s bands like Bikini Kill and L7. We’re also fans of the female electronic musicians who shaped the sound of science fiction movies and TV. The game-changing soundtrack to 1955 blockbuster Forbidden Planet was created by Bebe Baron and her husband Louis; then, in 1963, Delia Derbyshire created the iconic Doctor Who score at BBC’s Radiophonic Workshop. And the twentieth century’s greatest theremin player, whose work inspired the score for Star Trek and countless other scifi tunes, was Clara Rockmore.

For Grape Ape, though, we settled on an analog sound. To record a master, we booked time at John Vanderslice’s famed studio Tiny Telephone in Oakland, CA, where all the equipment is analog (magnetic tape! how does it work?). It was perfect for recreating the early 1990s indie sound. We brought in Chris Palmer to play guitar, Desi played bass and did vocals, and Kim Aparicio joined us on drums.

It’s funny that there’s an entire science fiction subgenre called cyberpunk, but the mostly-male writers in the genre practically never deal with punk rock or music. Except for Pat Cadigan. Her groundbreaking novels Synners and Mindplayers focus on rock stars and music-making technologies of the future. I thought a lot about her work as I was building the world in The Future of Another Timeline.

That said, I should make it clear that my novel is absolutely not cyberpunk. All the technology is organic, made from rock and water, and there’s no surveillance capitalist future. My time traveling characters can only journey into the past, where they discover the spirit of riot grrl rebelliousness is blooming in late-nineteenth century belly dancers and early-first century Nabataean priestesses. This isn’t the stylish nihilism of cyberpunk. It’s rowdy, homemade riot grrl hope. 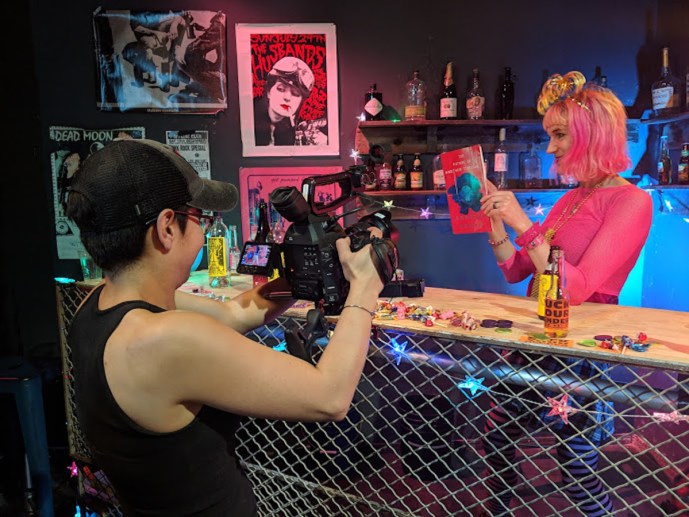 Making the video was basically like throwing a DiY music time travel party. My pal Fivestar is a filmmaker who has studio space in Oakland, and she let me rent the studio on a slow weekend day. She already had a bar set, so we decorated it to look like an early 1990s club in East Los Angeles where Grape Ape might have played. Desi brought in her pals Monique Lopez and Marina Martinez to play the roles of bassist and guitarist, and Kim drove down from Sacramento to play drums on the video.

Then I invited a giant pile of women and nonbinary people to cheer and dance while the band played. Fivestar asked actor Miche Manitou to play the bad guy, a time traveler who wants to destroy women’s rights in the past and future. He tries to break up the riot grrl party, but of course Glorious Garcia stops him in his tracks! Thanks to Mercedes Gonzalez, our incredible film editor, the story unfolds delightfully. It’s not quite the way things go in the novel—this video contains no spoilers!—but the video’s happy ending is definitely in the spirit of the book. 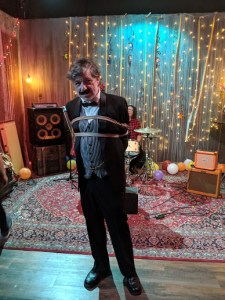 The whole experience of making this music video was goddamn magical. I honestly thought my heart was going to shatter my ribcage when I saw Grape Ape performing and heard the crowd chanting along with the chorus, “I like to see the bitches, the bitches, the bitches, I like to see the BITCHES!!!!!!” Desi was 7 months pregnant when we filmed (her daughter Izzy was born in early July). I love the image of this kickass riot grrl singing about women’s rights while obviously pregnant.

I also want to emphasize that something like this doesn’t come together by magic. Desi and I started planning over a year in advance, and I made sure that I set aside a chunk of my advance from Tor Books to pay everyone involved, from the musicians and film editor, to the director and Grape Ape actors. Yes, these people are my friends. But artists should be paid! (I will confess I paid the audience of extras merely in pizza, wine, and love.) 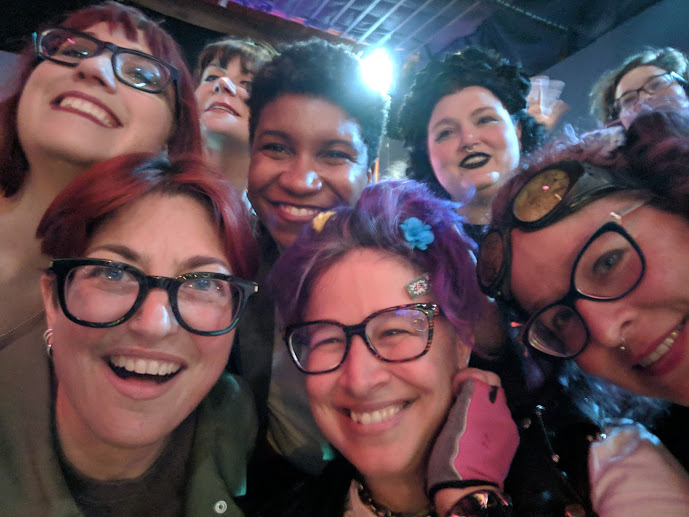 If you’re feeling depressed about the future, or you’re just having a bad day, I recommend watching this video to get your spirits up. Because as Glorious Garcia would yell:

The Future of Another Timeline is my promise to you and myself that we are going to patch this timeline up together, with our guts, our communities, our glitter, and our glue guns. It may not look fancy or official. But one day, it will be home again.

Annalee Newitz is the author of the novel Autonomous, nominated for the Nebula and Locus Awards, and winner of the Lambda Literary Award. They are a contributor to the New York Times opinion section, and have a monthly column about futurism for New Scientist. They are also the co-host of the podcast Our Opinions Are Correct. Previously, they founded io9 and ran Gizmodo. Their new novel, The Future of Another Timeline, comes out September 2019. You can find them on Twitter @annaleen.