The Dangerous and Thrilling Pursuit of Perfection in Netflix’s Cheer 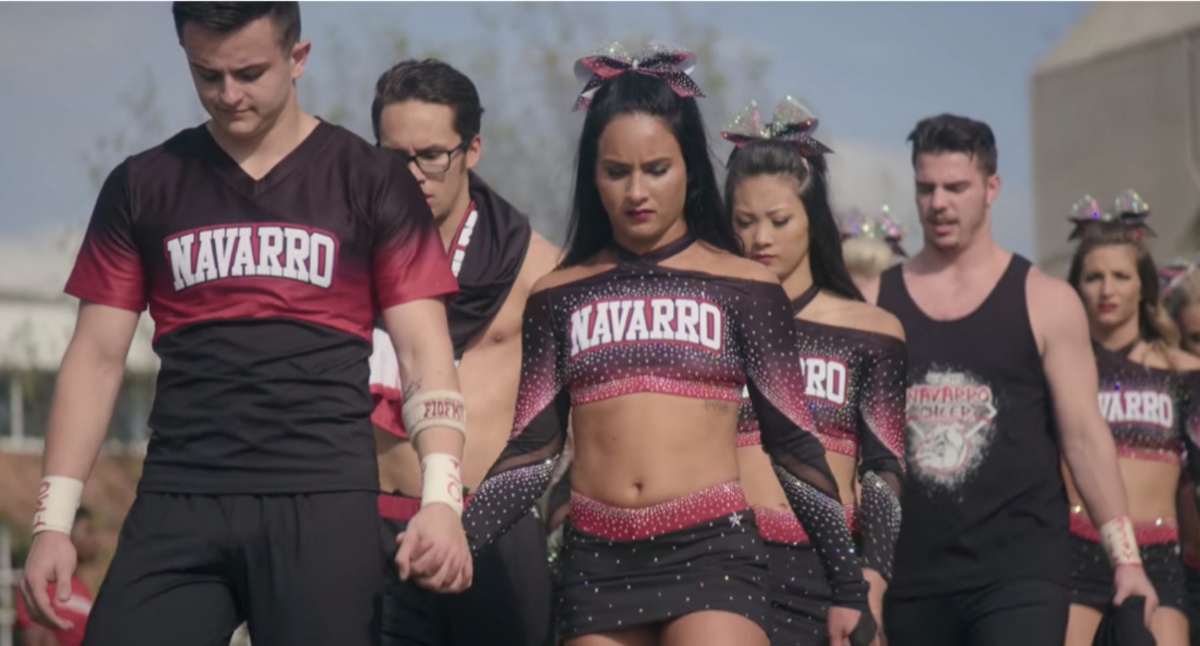 Over the weekend, I binge-watched the Netflix series Cheer, which followed the Navarro College Bulldogs nationally-ranked Cheer Team from Corsicana, Texas. As I was watching their coach, Monica Aldama, and the various amazing characters in the series, I found myself constantly moved and horrified by the ways in which these young people put their bodies through physical hell in order to be perfect. It’s the kind of Black Swan energy that I can’t help but respect.

The cheer team is made up of 40 members, but the ones we spend the most time with are Gabi Butler, who is famous in the cheerleading world and has some deeply flawed but well-meaning parents; Jerry Harris, sunshine in human form who lost his mother to illness but has managed to find peace through cheerleading; Morgan Simianer, a relative newcomer to the cheering world who spend a lot of her young years in near poverty and abandonment; Lexi Brumback, another troubled teen who struggles with her past record coming back to bite her current-day success; and La’Darius Marshall, who comes off as a diva, but it’s really a response to the fact that he had had a hard life of emotional and sexual trauma.

Basically, if you wanted a dynamic, motley crew of characters, along with their type-A coach, Monica, you have found it in Cheer.

Cheerleading is one of the most physically intense sports in the world, with the highest rate of injuries. It is considered one of the most dangerous sports in the world, being the cause of more than half of the “catastrophic injuries to female athletes. This includes skull fractures, cervical spine injuries, brain injury or concussions, paralysis, and death,” according to the Washington Post.

To make it worse, it’s a sport with no upward mobility. After college cheer events, there really is nowhere for these athletes to go. Most professional cheerleaders at games have a background more in professional dancing and have a more hyper-glamorous look to them—not to say they are not athletic, but they are not performing with the intensity of these college students, especially because every passing year, the requirements to be the best keep getting higher. That means more flips, more tosses, and more intense pyramids.
In the docu-series, you see these early 20-somethings flipping so high in the air, and falling repeatedly, that they have to get their ribs pushed back in. One damn near gives herself a concussion when she collides her head into someone else’s. As they get closer and closer to the finals, everyone has injuries to their ankles, their shoulders, and their ribs. Everyone is wrapped up, but they also want to do this.
Morgan says that she would do anything for this team and that she would do anything for Monica. And she means that. This sport, the desire to be perfect and win, is for a lot of these kids—the highlight of their life. Those few moments of performance are what you train an entire year for, what you put your body through for, and it is glorious if you win.
If you win.
What is also brought up—though not as much as I’d like though—is the massive class and racial issues within cheerleading. Bring It On did bring this to our attention before, but in watching Cheer, it was clear that there was a striking lack of women of color on the team, other than one Asian woman. The men are filled out with Black and Latino guys, but that’s it. Monica says that when she recruits, she’s looking for talent, but also “a certain look,” and considering the costumes and hairstyles she prefers, it very much cancels out a lot of women of color.
La’Darius is one of the few people who bring up how expensive it is, and how not everyone comes from a sponsored gym and can afford the training, so every moment counts—not to mention this cheerleading team is based in a conservative Texas town where a teacher tells them that Tex-Mex isn’t Mexican food, it’s “better than Mexican food.” Being perfect also means allowing yourself to be okay with discomfort, and I can’t image the discomfort of being in a homophobic area and choosing that for your sport.
Cheer was an intensely painful watch, but I also felt a weird sense of pride watching these young people go after excellence, knowing that it is temporary, but that doesn’t mean they can’t hit it.