iPad's The Daily Available for Download | The Mary Sue 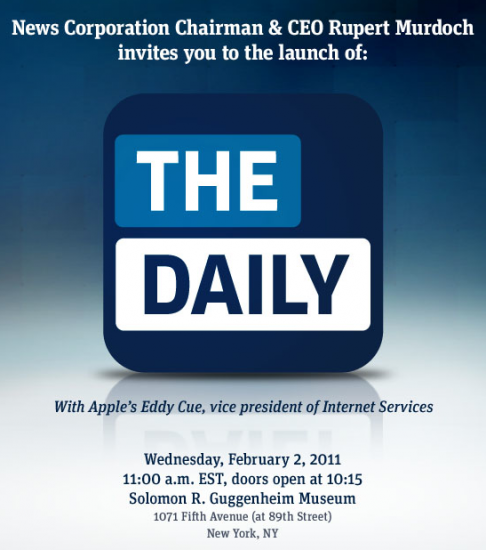 CEO of Newscorp Rupert Murdoch unveiled The Daily the subscription-based news app for the iPad earlier today making it the first of its kind on Apple’s app store. The app will deliver text, video, and other media for $0.14 a day, or about $0.99 a week.

“There’s no paper, no multimillion dollar presses, no trucks, and we’re passing on these savings to the reader,” Murdoch said to the crowd. “The target audience is the 50 million Americans expected to own tablets in the next year.”

While many other publications have dabbled in publishing for tablets, The Daily is the first to include the unique subscription model. When asked about whether this same model would be used in other apps, Apple’s Vice President of Internet Services said that an announcement would be made “soon.” While a larger announcement may still be yet to come, an update to app store’s terms and conditions does say that in-app subscriptions and auto-renewals are now allowed.

Though a paid system and ostensibly tablet based, The Daily offers some interesting caveats. For instance, much of The Daily’s content will be mirrored on a website. Newscorp was quick to point out that while available, it was only some of the content and not necessarily optimized for browser viewing. Again, from Ars Technica:

The Daily will also be highly social, allowing users to share stories through Facebook and Twitter similar to the New York Times app. However, all these links will be available to users who aren’t signed up for The Daily for free. The rest of the content will require a subscription.

This may be the first, but certainly not the last thrust of a traditional media company on to emerging mobile platforms. As important as the execution and consumer acceptance of The Daily is, it will be just as interesting to see what emerges to compete with it.