The Cowardice of Shutting Up: Women Silencing Women | The Mary Sue

The Cowardice of Shutting Up: Women Silencing Women 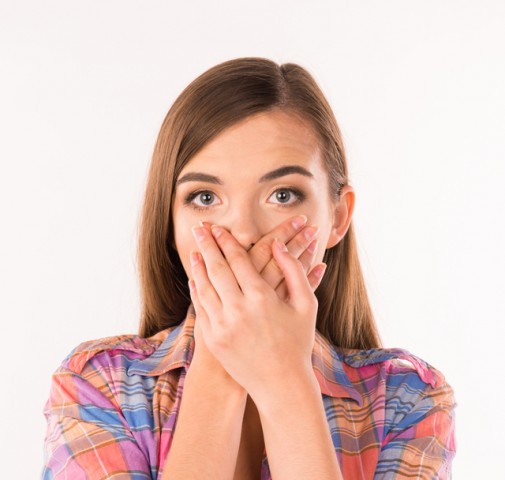 In the run-up to Christmas, a photo circulated on Facebook featuring a white, middle-class family of two girls, one boy, a mom, and a dad posed together in a garden. Mom and daughters had “festive” bright green duct tape over their mouths, their hands and arms bound by Christmas tree lights. Junior raised a triumphant thumbs-up to the camera in the proto-bro style of victory he will experience every day of his life as a white American male. Dad smugly held a chalkboard sign that read, “Peace on earth [sic].”

The image has since been removed, along with the page of the photographer who posted it.

The Mary Sue has made a deliberate decision to not repost the photograph out of respect for the girls, which is more respect than their parents showed them. In fact, the removal of this image is another form of silencing. While the girls were silenced in the photo—which was met with the HAW HAW hilarity of women guffawing “It’s true! Women talk too much! LOL,” and, “I’m a woman, learn to take a joke!”—having it completely erased from the internet is the same as just sweeping it under the rug like it never happened. But it did happen.

The photographer, Alabama-based Hannah Hawkes, posted this comment shortly before deleting her page: “After being silent, now isn’t that ironic … I would like to say that as a female I do NOT have and have never promoted violence to women! I do not support abuse, or the degradation of women.”

Hawkes, who claims she was called “every name in the book” and “received some very hateful and vulgar comments and messages” seemed to miss the point about “promoting” violence to women when she posted an image of three bound-and-gagged women under her caption: “Finally, Peace on Earth!” How is it not supporting or promoting the “degradation of women” when someone posts an image of a man and boy celebrating the silencing of the dearest women in their lives?

The lampooning of bound-and-gagged women also represents a staggering lack of self-awareness and a serious flaunting of privilege. “This photo was taken with humor in mind,” Hawkes wrote, “and was meant as a comical Christmas photo.” Because to a white middle-class family, binding and gagging daughters could only be so absurd as to be funny, right? Except that women and girls worldwide are subjected to horrifying forms of abuse at the hands of men all the time, and this image fails to recognize this violence. Even as it claims to promote “peace” through the silencing of women and girls, the silencing itself is an act of violent restraint and assault.

Much of the support for this image came from women who tried to silence the critical responses, like this one from user Kat Howell, who said, “It really captures the spirit of domestic violence, emotional abuse, oppression, and willful ignorance,” and this one from user Melissa Pomeranz, who said, “They look like they’ve been kidnapped. Not just gagged, but bound. Such a great and harmless lesson for their son and their daughters, isn’t it?” (What does this say about this boy’s chances of forming healthy relationships with women?)

It’s a toss-up as to what’s more disturbing: the image, or the support it has received from other women. Comments laughing off the implications of the image as women “talking too much” is perpetuating a myth that has no basis in fact but seems to have ingrained itself into the cultural consciousness.

What makes it worse for me personally is the inclusion of the phrase “learn to take a joke.” You know what? I know how to take a joke. I am quite hilarious, actually, and need no further schooling in “taking a joke.” Perhaps people need to acknowledge that some things just aren’t funny.

Lindy West has deconstructed comedy and sexism quite effectively, and I can genuinely add nothing further than a few air-punches and a, “That’s what she said.” But one of the motivating factors in my starting the poetry protest webzine Thank You for Swallowing was this idea that one’s own sexist joke deserves a pass. It’s that special snowflake attitude in effect: Why is “your” sexist joke any more deserving of a pass than anyone else’s? Does Hannah Hawkes’s misogynistic family portrait deserve a pass because it wasn’t her idea? Or because she’s a woman? Why do the women who post, “I’m a woman, therefore…” think that their personal experience is somehow definitive and universal?

I wonder what would happen if every woman stopped participating in that complicit silence in which we hide violence against ourselves. Hawkes said her “controversial photo was taken by request by the family,” but what if she had told the family no? Would she have lost the job completely over one image? What did she tell herself that made this staging okay, or did she consider it at all when she arranged the bound bodies into the frame? What if she spoke out instead of stayed silent? What if we all spoke out against the kind of Stockholm Syndrome that deludes a woman into thinking it’s okay to bind and gag her daughters for a picture to send around as being representative of this family, taking that picture and sharing it around social media, and thinking it’s just a joke?