[NSFW] The 'Con-a-Sutra' Is Exactly What It Sounds Like

Before the pandemic, I frequented various geek-centric conventions with my wife.

We sold our books at a table in artist alley.

Okay, honestly, we talked about doing that last part, but after a full convention day of tabling, panels, and cosplay, 10 times out of 10 we’d opt to have dinner then go to bed because we were exhausted.

That’s not to say other people didn’t go to conventions to do that last part, though. Hence my fondness of the upcoming book The Con-a-Sutra: An Adult Guide to Full-Frontal Nerdity.

Admittedly, my interest was piqued from the title, but then I got to the synopsis:

For everyone who’s a geek in the streets, a freak in the (Star Wars) sheets — or wants to be — comes a guide for nerds, by nerds.

Today’s nerds are loud, proud . . . and thirsty. They’ve stepped away from their action figure collections and toward the infinitely diverse collection of like-minded folk who are as turned on by cosplay as they are by foreplay.

But as knowledgeable as they are, nerds aren’t always experts when it comes to the logistics of sex. Enter The Con-a-Sutra: A Guide to Full Frontal Nerdity. This book is much more than The Idiot’s Guide to Mensa Sex and light years ahead of a collection of IKEA “put tab Blaarf into slot Numdoggal” instruction sheets.

Accompanied by classic comic book inspired art, noted fictional sexpert Professor Balls Xxxavier literally and figuratively illustrates the modern nerd’s wildest fantasies through a series of hilarious (if occasionally unachievable) sexual positions. Written to be inclusive of LGBTQ nerds, The Con-a-Sutra recognizes that nerds come in all body types, gender identities, and sexual orientations. Whether you prefer “The Splash Page,” “Wookiee Nookiee,” or “The Wane Manner,” there is something here for everyone – even if only a hysterical and reference-packed break from your favorite smutty fanfic.

A comical compendium of con-friendly coitus, The Con-a-Sutra lets you boldly go where no nerd has gone before.

The folks behind The Con-a-Sutra were kind enough to let us feature some of this amazing content for your viewing pleasure. 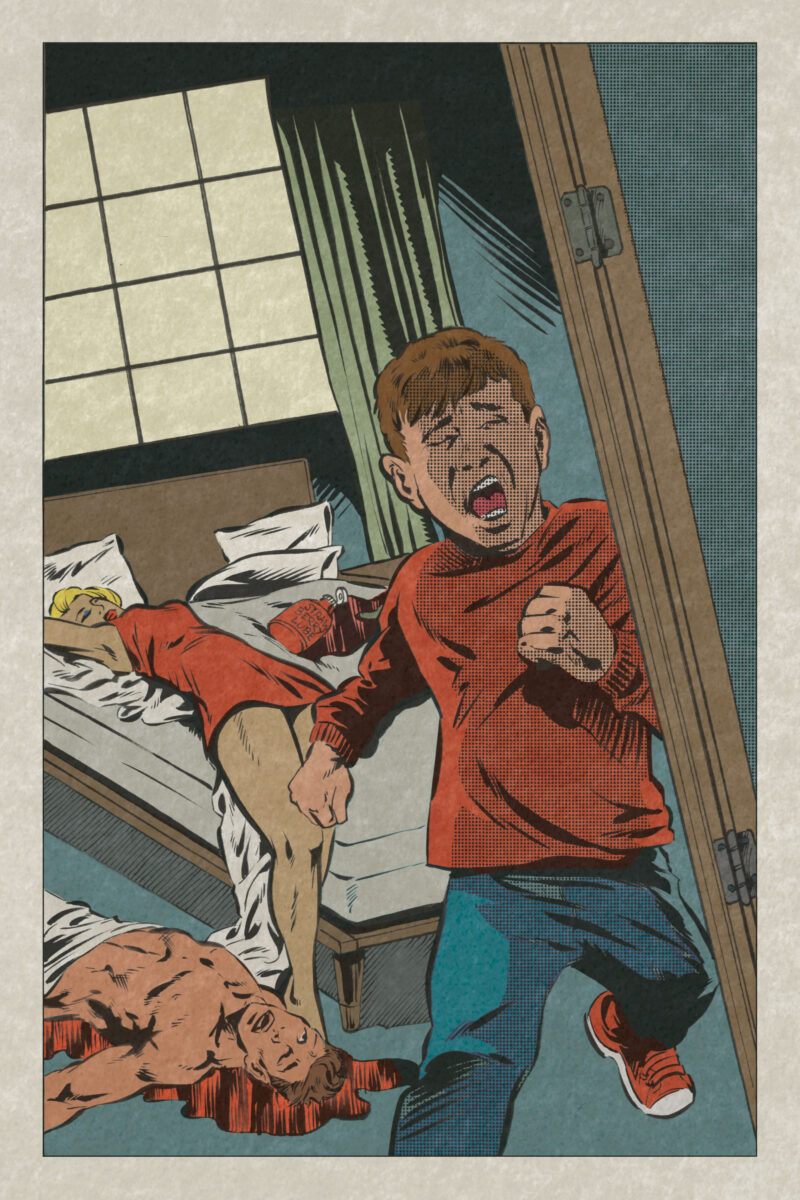 The Wane Manner: Pretend to be dead until your child leaves the room. Art by J. K. Woodward.

As the introduction says, “Thousands upon thousands of like-minded people get off on spending their days attending panels, cosplaying, and sharing in the celebration of their favorite characters, stories, and fandoms. But once the convention center closes, they swipe left on their con apps and right on their dating apps, zombie walk from the show floor to the dance floor, and free themselves from Escape Rooms to free themselves of inhibitions in hotel rooms.” 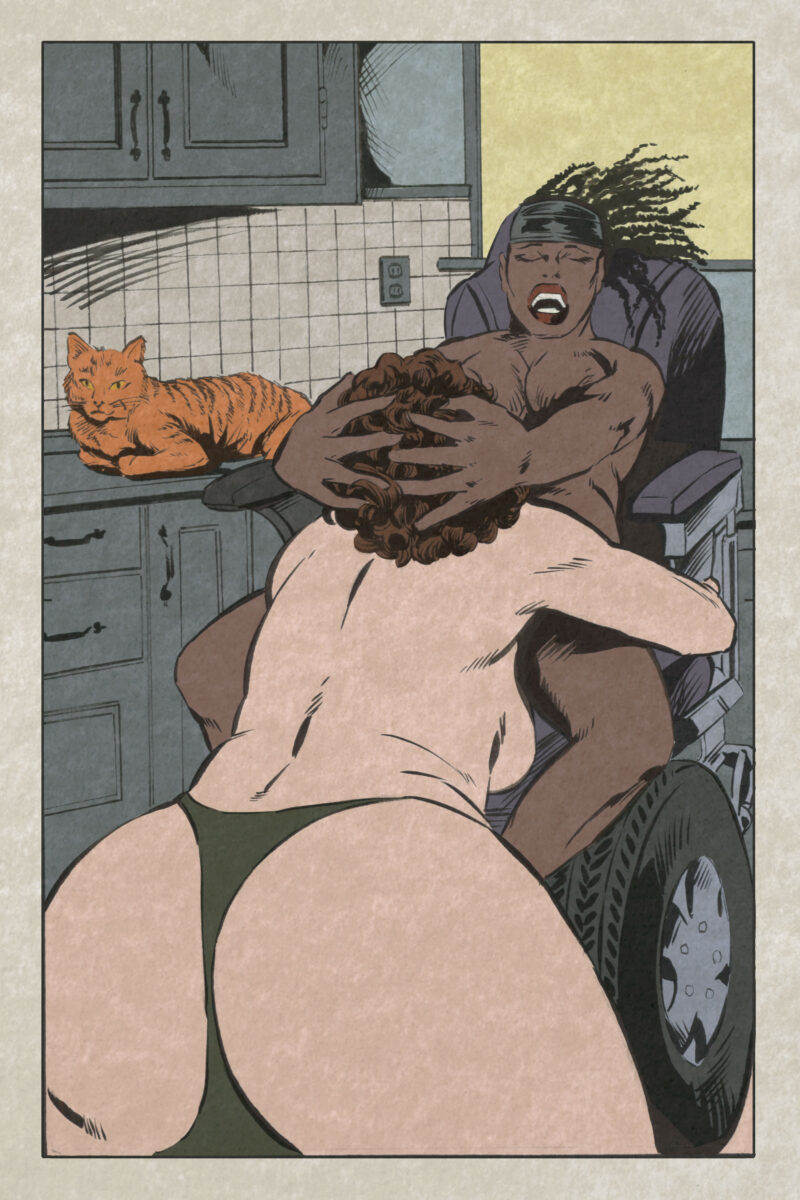 The Facehugger: Gently push your partner’s head, parkering their face as deep onto your private vagquest or bald-headed bishop as they’re willing to go. After a fair amount of drooling, any queen will be shooting spunkmeyer! Note: This position is best performed in a space where no one can hear you scream. Art by J. K. Woodward.

This book isn’t really a guide to get the stereotypical media image of a loser nerd laid, it’s more of a walkthrough on how to add more spice to what nerds are, most definitely, already doing. No woefully misguided nerd (often a man) pursuing someone (usually a woman who gags at the thought of collecting Pokémon cards) to the point of it being harassment, the book stresses the importance of consensual sex between two (or more) adults who ALL understood that reference (or at least, aren’t disgusted by that reference).

Michael Bay Presents: Sex! Without looking for motivation or a cohesive backstory, linger over your partner’s body for just a little longer than feels comfortable. Then go at each other as frenetically as you can, while somehow also proceeding in slow motion. Defy the laws of physics and nature, straining your loins as much as your suspension of disbelief. Make a huge amount of noise yet convey no discernable information. I know this doesn’t make sense—don’t overthink it. Just . . . sit back and enjoy. Art by J. K. Woodward.

With that being the case, the book fully embraces all things geeky, not just with its obvious nods to things like The Walking Dead, Teenage Mutant Ninja Turtles, and Animal Crossing, but with comments about fanfiction, roleplaying, and fandom. 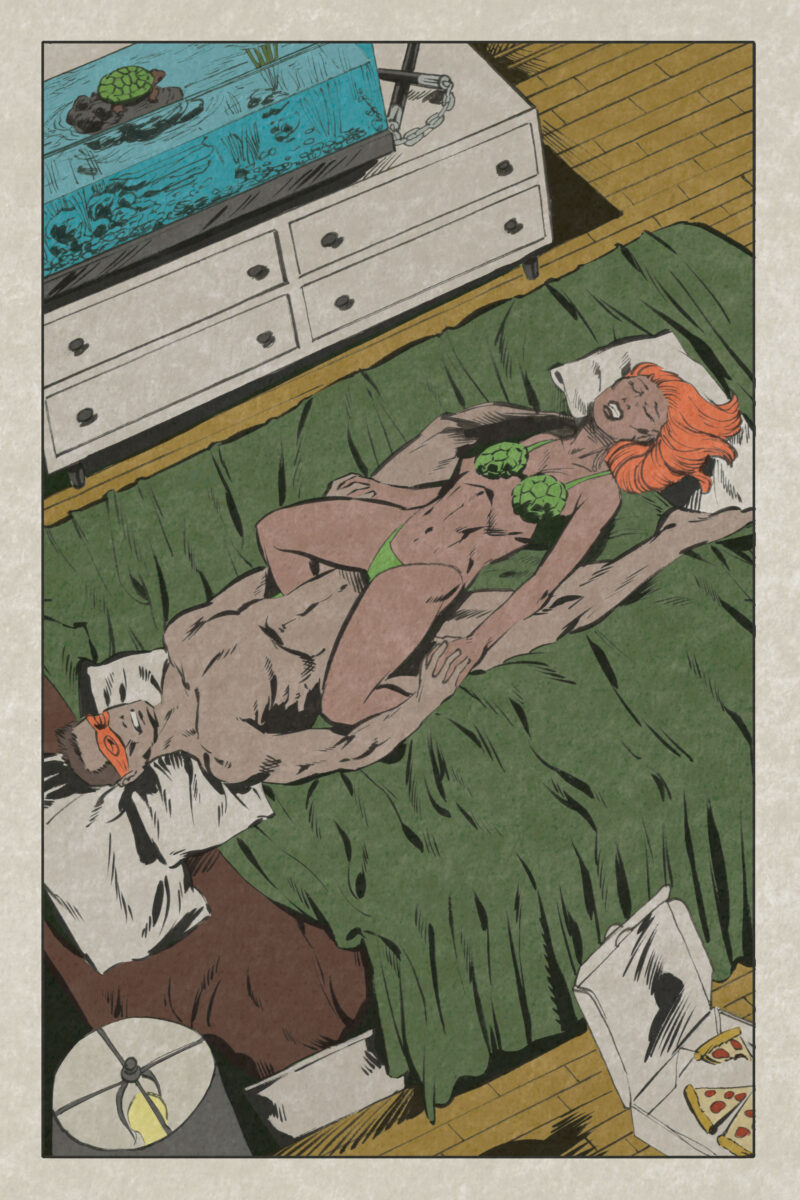 Turtle Power: You may be jonesying to caw her bunghole, but slow and rocksteady wins this race. Rather than o’kneeling to shred her, lie on your backs and splinter each other for a while. Brush your fingers softly across your partner’s body as a painter would use his brush on a canvas. Note: You’re going to be starving by the end of this, so preorder a pizza or appetizers on the half shell to arrive after you’re done. Art by J. K. Woodward.

After growing up with so many narratives about the nerdy collector needing to pack up the figurines if they plan on ever making a connection, it’s cool to see something that says, “Naw, you can definitely hook up with someone who understands that display case with that Persona 5 Joker figurine and an autographed copy of the game.”

It’s 2021. I’m an adult with Nintendo-themed washcloths and Batman curtains in a room full of geek memorabilia. And no, that hasn’t put a damper on my sex life. You really can have your cake (which isn’t a lie) and eat it, too.

You can preorder The Con-a-Sutra: An Adult Guide to Full-Frontal Nerdity on Bookshop and over at BenBella Books. You’ll be able to put the graphic in graphic novel on June 29, 2021.

Or you can enjoy the book for its art and humor and leave it at that. 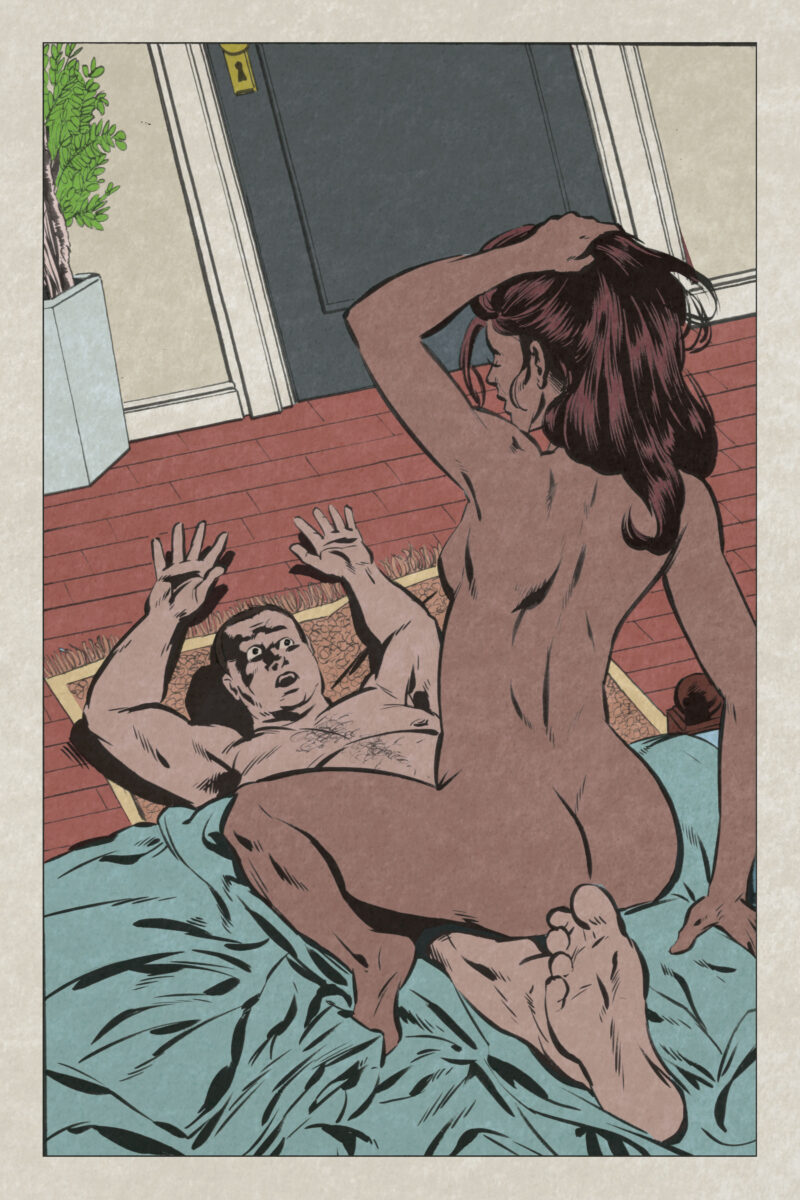 The Mary Sue: The woman does all the work while the man disbelieves everything he’s seeing. Art by J. K. Woodward.