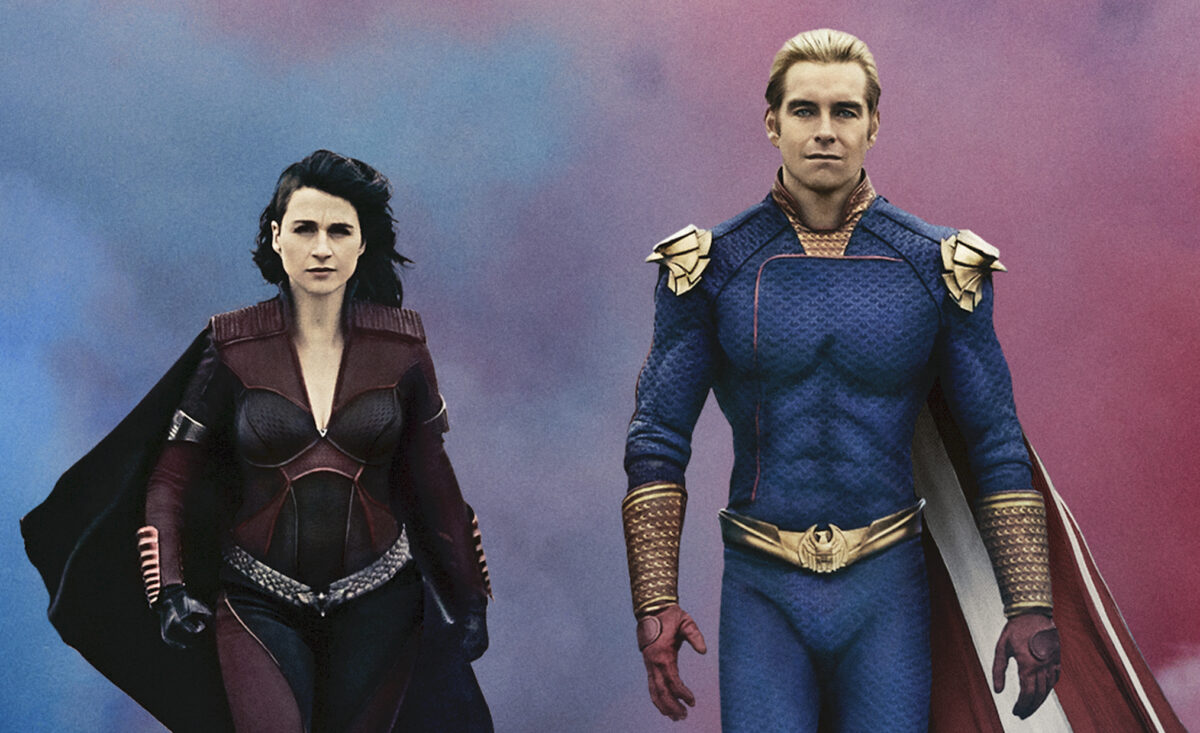 Great costuming doesn’t just put cool visuals on screen, it tells a story. A costume tells you so much about a character, and it also informs the performance of the actor wearing it. That’s nowhere more true that with live-action superheroes, where super suits function not just as eye candy, but iconography and character shorthand. Even on a show like The Boys where the supes are getting taken down a notch or seven, their looks are important and a lot goes into creating them. Last week, The Mary Sue spoke with the series’ super costume designer Laura Jean Shannon about designing these looks and the cast that get to wear her creations.

What goes into designing a super-suit? Especially when the suits tell such a story about each character? It all comes down to character and research, Shannon told us. “I do think that one of the reasons why our show is so successful with the audience is because we really actually really do care about developing the characters,” Shannon shared. “So it’s not just about ‘oh hey that looks cool.’ We really do a deep dive into the psychology behind each of the characters.”

Designing a super-suit or twenty takes time. Shannon starts working with Eric Kripke and the rest of the producers “super early on, like before we were even in pre-pre-production, talking about the characters and talking about … the universe that we were creating, and it was really important to them that we create a legit superhero universe.” That meant things were truly real and functional. Shannon added: “It wasn’t like a tongue in cheek, ‘haha’—the costumes aren’t a joke, they’re steeped in reality and grounded and based in a world where superheroes walk amongst us. So jumping right out of the gate that was our edict.” 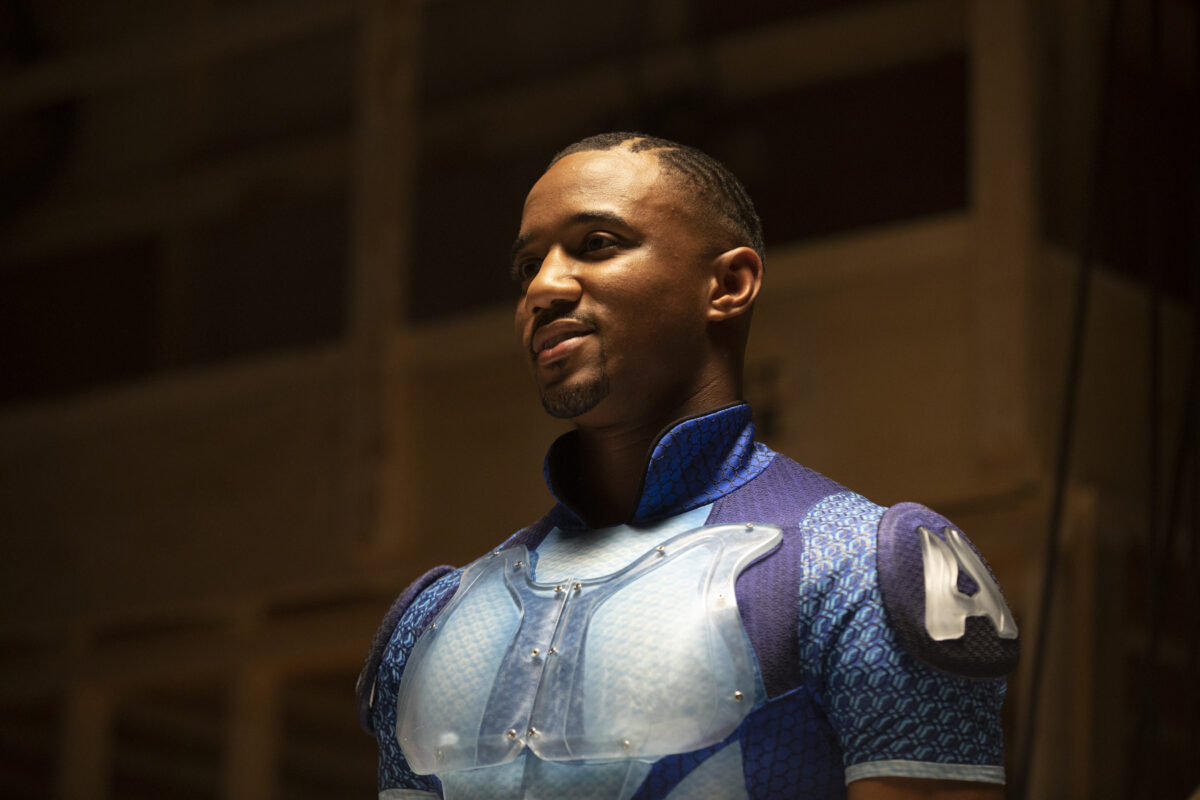 That applied to characters like A-Train, who Shannon explains they put the most research into in terms of finding the right fabrics that would work in reality for a speedster. His chest piece also was meant to evoke armor, but in a way that was light and emphasized him moving quickly through the air. “I wanted there to be the feeling of that aerodynamic quality,” said Shannon, but for the armor to also allow the audience to see the fabric of his suit, which was based on the aerodynamic surface of a golfball

There are easter eggs and details like that in every costume, some based on the characters’ appearances in the comics, and other as subtle storytelling hints. Homelander and Stormfront are prime examples.”The inspiration that actually makes sense for the character, it can come from just about any place,’ said Shannon. And for these two, the inspiration was … fascism.

“Trying to create superheroes, each one invokes who they are through the iconography that we wove into literally the fabric of their suits,” said Shannon. This means Homelander’s suit is made of a fabric pattern that’s actually tiny eagles! It was created, like most of the custom fabrics on the show, by Shannon, and those eagles were specifically chosen for their association with fascism.

The same is true for Stormfront, who we now know is an actual Nazi. She had stylized crosses in the fabric of her suit, which actress Aya Cash revealed to us are meant to evoke swastikas and other Nazi iconography, but as with many of the other costume details, you have to look for it.

But other costume details aren’t so subtle, like the Starlight 2.0 costume that Erin Moriarty wears. It’s not just a comment on sexism and objectification—for Starlight that costume is a disguise that lets her blend into the world of the Seven but also makes her essentially Clark Kent, so that no one really recognizes her in her civil clothes. Which are way more comfortable. 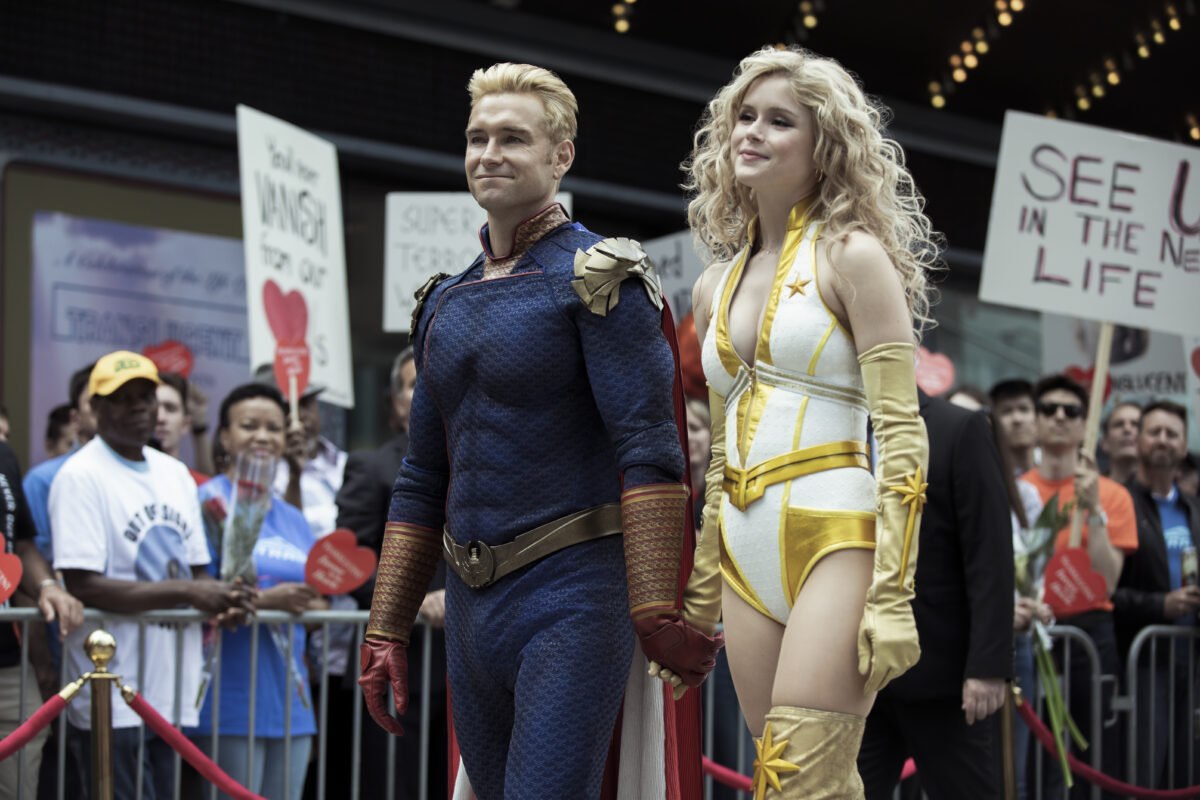 “I think it looks great, but you know, the boots are uncomfortable. The tights are uncomfortable,” Moriarty shared. “But it helps me. Starlight’s not meant to be comfortable in that costume. So I just needed to use it and it looks great on-screen.” Moriarty confessed to some envy of her co-star Karen Fukuhara’s far more practical duds and that Fukuhara got to wear Doc Martens with her super-suit in Suicide Squad.

According to everyone I talked to, the hardest thing about being a supe on TV is … going to the bathroom. “I’ve peed on [my costume] more than once,” Moriarty laughed. “It’s an obstacle course to get on and off.” Aya Cash had just as hard of a time. “It took about halfway through the season before someone mentioned to me, one of our super suits gals in wardrobe was like, ‘you know, maybe we can put a zipper in so that you can take down the pants so that you can pee by yourself,” Cash said. “I couldn’t pee by myself for most of the season.”

Antony Starr, who plays Homelander, went through the same struggles in season one. It took them “eight months of figuring out how to put zippers in the right places,” according to Starr. Homelander’s costume, in particular, was a challenge due to the amount of padding. That padding also makes it incredibly hot, but there’s a system inside that allows for cold water to pump through in tubes to cool Starr down, something that’s common in racecar driver suits.

From the fabric to the functionality, so much goes into the costumes on a show like The Boys, and we can’t wait to see what they come up with next.