“My Skin Has Turned to Porcelain, to Ivory, to Steel” From Little Bird to Queen, the Ballad of Sansa Stark

Queen in the North. 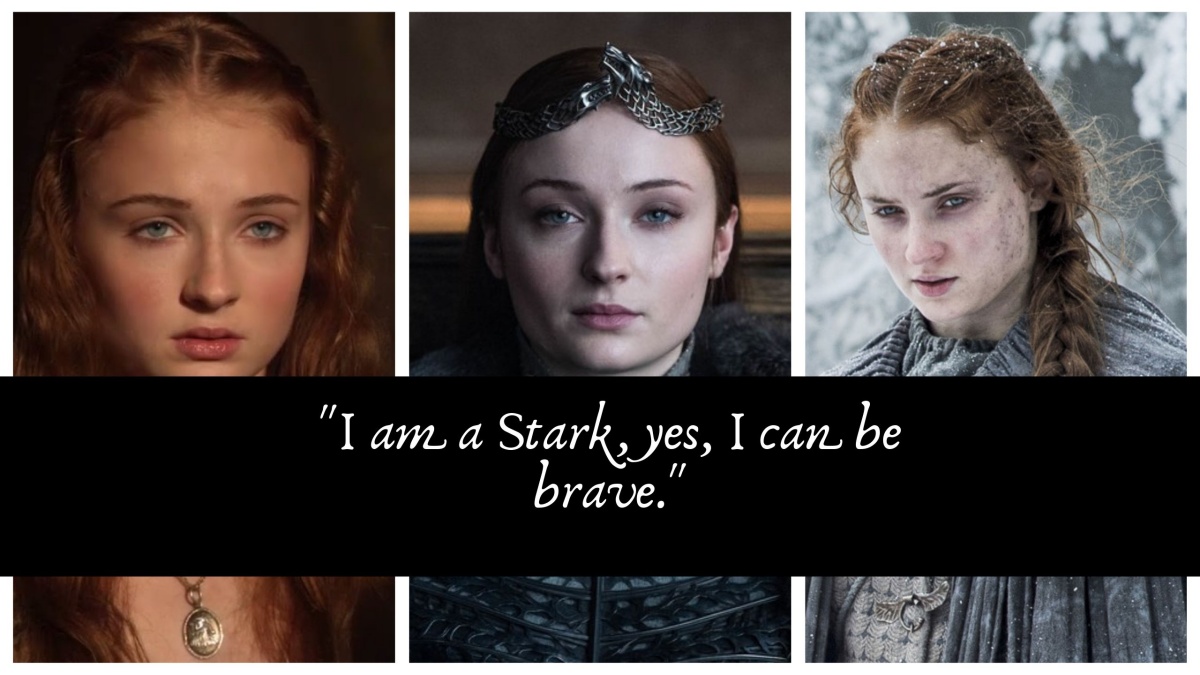 “‘I will remember, Your Grace,’ said Sansa, though she had always heard that love was a surer route to the people’s loyalty than fear. ‘If I am ever a queen, I’ll make them love me.'” —A Clash of Kings, Chapter 60, Sansa VI.

Sansa Stark, first of her name, ended the series being crowned queen of an independent North, fulfilling her season-one wish to one day be queen, albeit much differently than she first expected.

From the beginning, Sansa Stark has been one of my favorite characters in A Song of Ice and Fire/Game of Thrones, but I am also fully aware that if I had found Sansa a few years earlier, I might have (foolishly) disliked her.

What’s amazing about Sansa, in the books, is that we get her point of view in the first place. Most heroines in fantasy are more like Arya or Brienne—tomboys or warriors who are stifled in a sexist world that resists allowing them to thrive as their true selves. In comparison, Sansa is very much a lady in the traditional sense. She was raised listening to the songs and stories of knights and nobility, and wishes to emulate the goodness she sees.

As a result, Sansa is much more naive and traditional than Arya when the story begins, and a bit snobbish in her own way. Mind you, she is eleven years old when the books begin and roughly fourteen when the show begins. Sansa is delighted in going to King’s Landing and her betrothal to the handsome Prince Joffrey Baratheon. She doesn’t see that he’s an asshole because she wants to believe in the goodness he has presented to her.

Her initial loyalty to Joffrey is held against her because “she should have known,” but that ignores the fact that Sansa is at the stage of her life where she is interested in boys, interested in being queen, and also rivals with her sister. She sees the illusion of a noble prince and believes it because she was raised to be trusting and patient, especially to someone who is about to be her husband. Therefore, she ignores the mood swings, embracing the interest of Cersei Lannister. The only person who warns her about this is facade is Sandor Clegane, a.k.a. The Hound.

At the Hand’s tourney, Sansa sees the event as similar to her stories, and it only serves to bolster her notions of knightly valor and chivalry. Clegane tells the girl how his brother, Ser Gregor Clegane, burned his face. Still, she continues to believe the lies fed to her and ends up telling Cersei that Ned is planning to leave because she doesn’t know the truth of her father’s plans. After Ned’s arrest, Sansa is forced to call her father a traitor, and despite pleading in front of the king and his retainers for mercy, she is forced to see her father executed.

Joffery takes Sansa to see her father’s head, and she contemplates pushing him off the edge, even if they both die, and is only stopped because of The Hound. It’s an emotional scene in the book, but Sophie Turner sells the emotions perfectly in the show, and it’s the beginning of Sansa’s storyline in earnest. She thought she was the princess in the story, and now her eyes have been brutally opened to the truth.

“There are no heroes … In life, the monsters win.”

After this season, Sansa is a hostage and, in order to survive, uses her lady’s courtesies as she dutifully pretends to love Joffery in order to stay alive. Her only value is that she is an heir of Winterfell, and she must use that for all the advantage she can get. Still, Sansa remains active. When a knight named Ser Danots arrives drunk at Joffrey’s name day celebration, she comes up with a lie to spare Dontos, and Joffrey instead strips him of his knighthood and makes him a court fool, as Sansa suggested.

This scene shows the intellect behind Sansa’s kindness. A lot of people have complained that Sansa was not “active enough,” and while that is completely untrue in the books (she helps organize her escape over two books), despite the TV show cutting out scenes, I’d ask if you were an eleven/twelve-year-old hostage, how would you act? Would you, after having the entire foundation of your existence proven to be a lie, after losing your father, after being a hostage in a sea of enemies, just turn into a warrior killer? That’s what a lot of people wanted Sansa to be, but that was never her character. She was someone who—despite being beaten constantly, belittled, and harmed—survived and learned from her mistakes.

Sansa’s soft strength was important to me, because for a long time, it was something I couldn’t relate too. In the ’90s and early 2000s, we created female heroines who could do it all, who were powerful and fierce. In a group team, there was always the “girly” one and the “tough” one, and it was always coded with girly being silly or frivolous. It wasn’t until someone like Katara on Avatar: The Last Airbender that we got a heroine who was badass and sweet, but she was still contrasted with the “tomboy” character of Toph. I internalized that kind of mentality when I was younger, because I’d seen femininity and softness portrayed as weakness so many times, and I didn’t want to be weak.

Sansa was one of the characters who helped me unpack that. One of my favorite things about Sansa was that she did not lose her capacity to be kind; she didn’t lose her softness. We saw this in the second season/book, when Stannis’ army was approaching, and it was Sansa who comforted the ladies who were cloistered together with Cersei, who is just the worst. We also saw this in the wedding scene between Tyrion and Sansa in the books where Sansa did not kneel for Tyrion, taking that moment of resistance. That was cut in the show because … ugh. Won’t get into it.

Despite the issues I have with changes made to Sansa’s character in the show, it remains that she and Sophie Turner’s performance touched my heart. All I wanted was for her to survive and be okay. I wanted Sansa to be okay for all the girls who have been crushed by this world, who had dreams and optimism and they felt those things dashed. Sansa reminded me of the strength we have to survive those moments. Sansa was beaten, abused, and in the show, raped, but she got her revenge by taking the lessons she learned from terrible people and not becoming them. Sansa—not Robb, not Bran, not Arya—managed to bring Tully brains and Stark honor together into a queendom.

Sansa Stark is Queen of the North, and she outlived all those who abused her, all those who doubted her, and that is something to celebrate.

THE QUEEN IN THE NORTH.