Why I’m Super Excited About The Alienist TV Show

I read Caleb Carr’s 1994 novel The Alienist a long time ago, when I was much, much too young to have my hands on it, but I’ve never forgotten its haunting first line: “Theodore is in the ground.”

That’d be the Theodore Roosevelt, here a character in the book and an upright police commissioner, years before the Presidency was a twinkle in his eye. Roosevelt unites the protagonists to pursue a monstrous serial murderer who is killing young male prostitutes in New York’s shadowy corners. 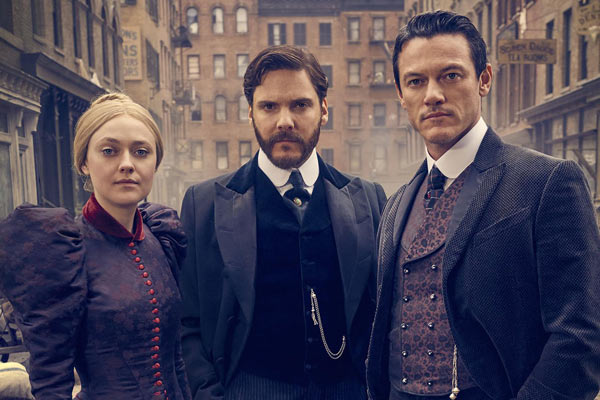 Not only is the story a rich and disturbing one that seems perfect for today’s binge-y TV landscape, but I can’t imagine a finer cast. Brühl, who might be better known to readers of this site as the wonderfully villainous Zemo in Captain America: Civil War, is one of my favorite actors, and he’s taking on the titular role of “Alienist” Dr. Laszlo Kreizler. Evans is playing John Moore, with Fanning as Sara Howard. Robert Wisdom and Q’orianka Kilcher round out the cast as members of Kreizler’s household staff that he has “rescued,” and Brian Geraghty appears as Roosevelt. Here’s the show’s synopsis:

The psychological thriller drama is set in 1896, when a series of gruesome murders of boy prostitutes has gripped New York City. Newly appointed police commissioner Teddy Roosevelt calls upon Dr. Laszlo Kreizler, a criminal psychologist – aka alienist – and newspaper illustrator John Moore to conduct the investigation in secret. Joining them in the probe is Sara Howard, a headstrong secretary at police headquarters.

The creative team here isn’t too shabby either: Cary Fukunaga, the mind behind the first, excellent season of True Detective, created and executive-produces the show. Author Carr is on board as a consulting producer, which always gives me an extra boost of confidence that a series will stay relatively true to its origins. It’s directed by Jakob Verbruggen, who’s worked on Black Mirror and The Fall. As you can see from the trailer above, the setting looks equal parts scary dark and lavishly stylish. Most excitingly, we could be getting a smart exploration of sexuality and gender equality set in the past, which might be my favorite kind of media.

In an interview published today over at The Hollywood Reporter, Paramount TV president Amy Powell talked about getting The Alienist made, and it reminded me how utterly ready I am for this show, which premieres on TNT January 22nd. While The Alienist is a limited, 10-episode series, Powell mentions that it could possibly expand, with a boundary-breaking role for Fanning:

We wanted the show to build Dakota Fanning’s character into something more substantial than was originally in the book. We hope to set up a second season around her since Caleb Carr’s follow-up book follows her character as the first female detective in New York City.

It’s nice to know going into The Alienist that this might not be last we see of these characters or their world. Carr’s follow-up book, The Angel of Darkness, features Sara Howard as a private detective in an era resistant to seeing a woman in that role. But we’d be pretty damn psyched about it.

I’ll never have enough historical dramas to watch, let alone historical murder mysteries, so I’m really hoping that this one lives up to its source material and promising cast. I’ll have a review of the first episodes as soon as I can get my grubby paws on ’em.