Exclusive: The Adventure Zone Cast on Their Upcoming Graphic Novel & Being Open to Feedback 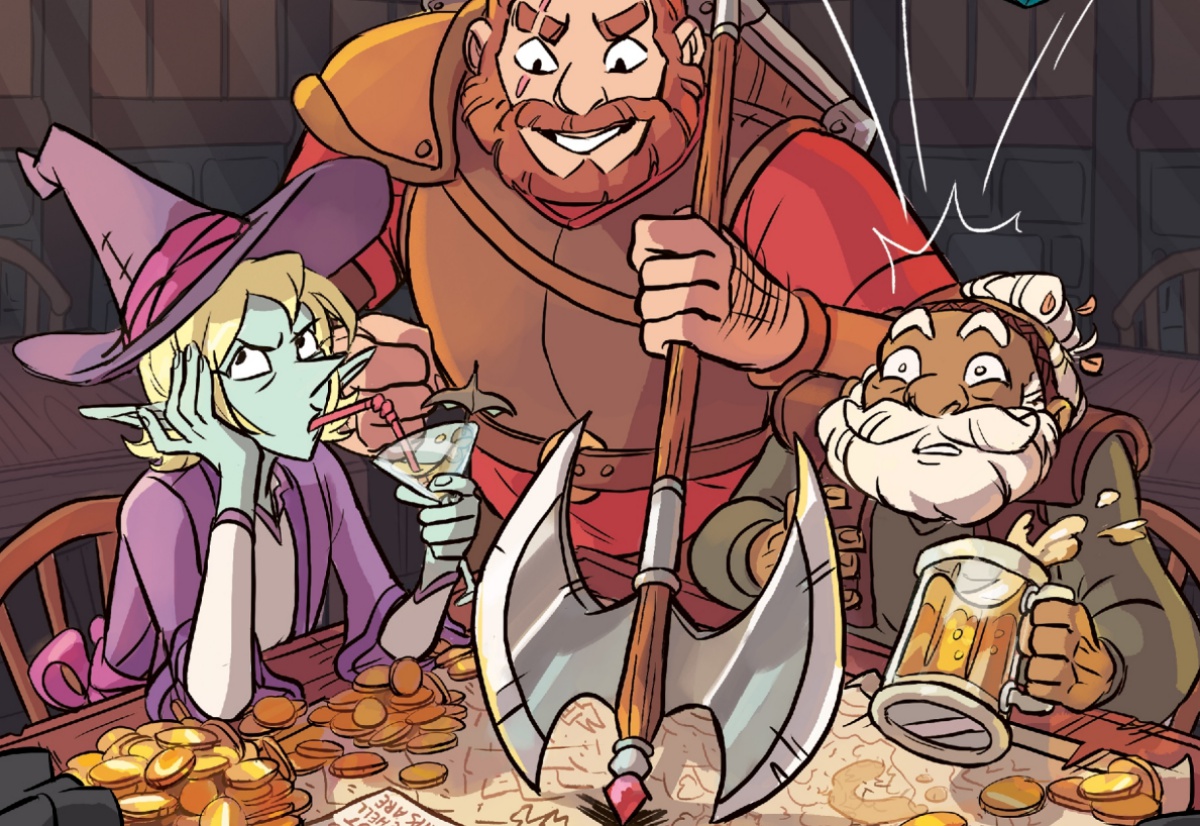 The McElroys are busy people. They run several podcasts together as a family, with one of their most popular ones being The Adventure Zone: a Dungeons and Dragons podcast where the three brothers and their dad take on a campaign. The McElroy men, Clint McElroy, the patriarch, and sons, Justin, Travis, and Griffin McElroy, have taken the game and turned it into an awesome storytelling experience that has translated well into (as of right now) 99 episodes.

The show’s first campaign, the Balance Arc, made up 69 episodes and wrapped in 2017. The show has gone on to do two more campaigns, with a third currently running. The first arc, however, has become the basis for their upcoming graphic novel The Adventure Zone: Here There Be Gerblins, which was written by the McElroys and illustrated by Brooklyn-based artist Carey Pietsch, who has been featured on this site before.

Our protagonists in Here There Be Gerblins are Magnus Burnsides (played in the original campaign by Travis) a human fighter who really wants a pet, Merle Highchurch (portrayed by Clint) a dwarf and really the unsung hero of the series, and Taako (portrayed by Justin) an elven wizard with an aloof behavior and loves take items off dead bodies.

The podcast and graphic novel go through similar story beats, with the graphic novel medium leading to some changes in dialogue and elements, but overall staying very true to the descriptions and heart of the podcast.

Pietsch’s art adds depth to the page at every turn, bringing this world to life in a really exciting way and also giving the characters a full range of expression that almost makes you forget you are reading. 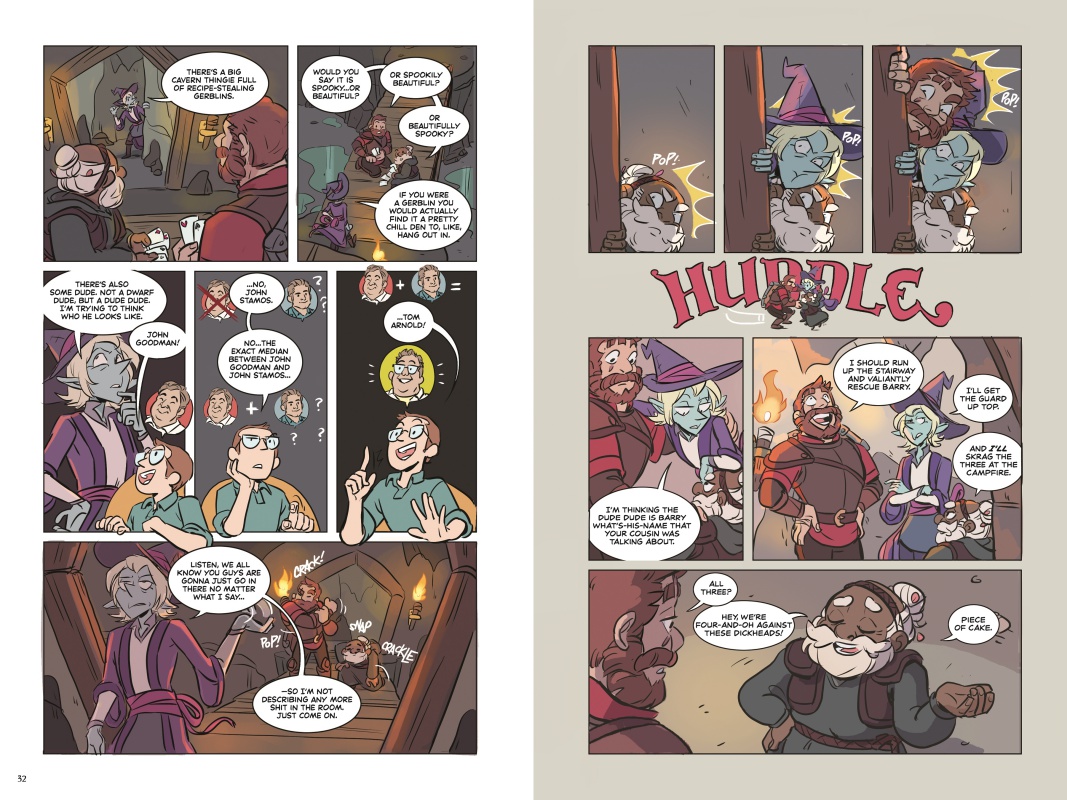 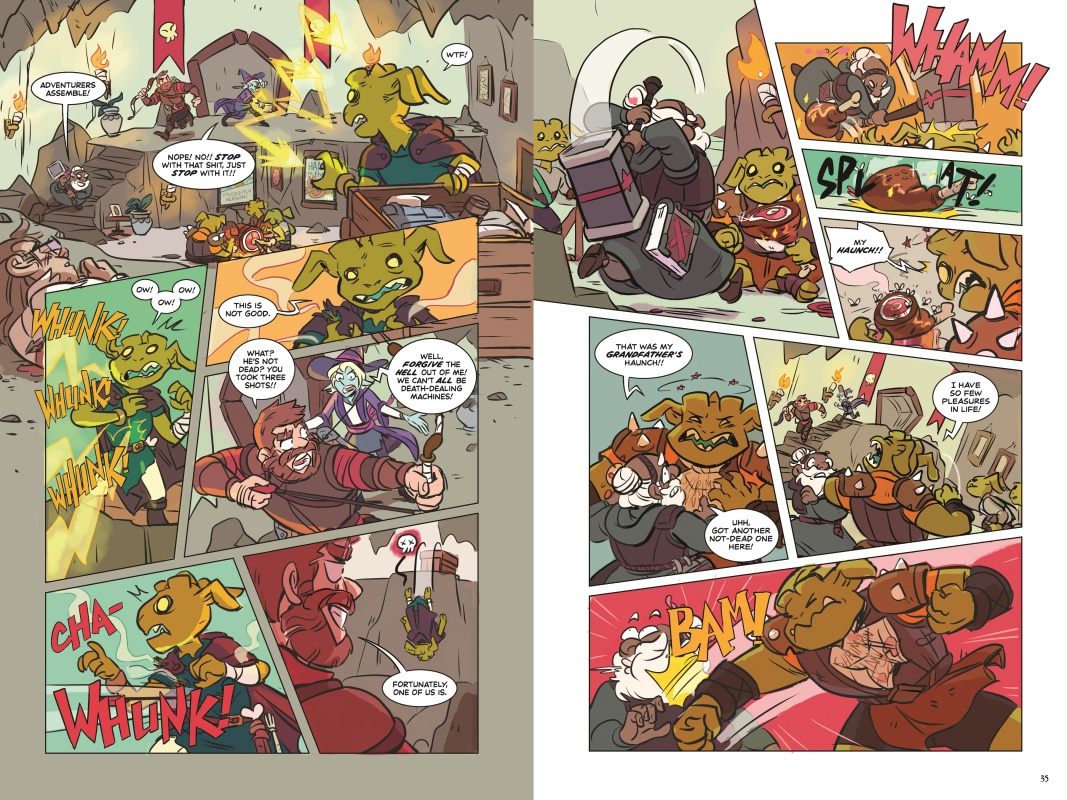 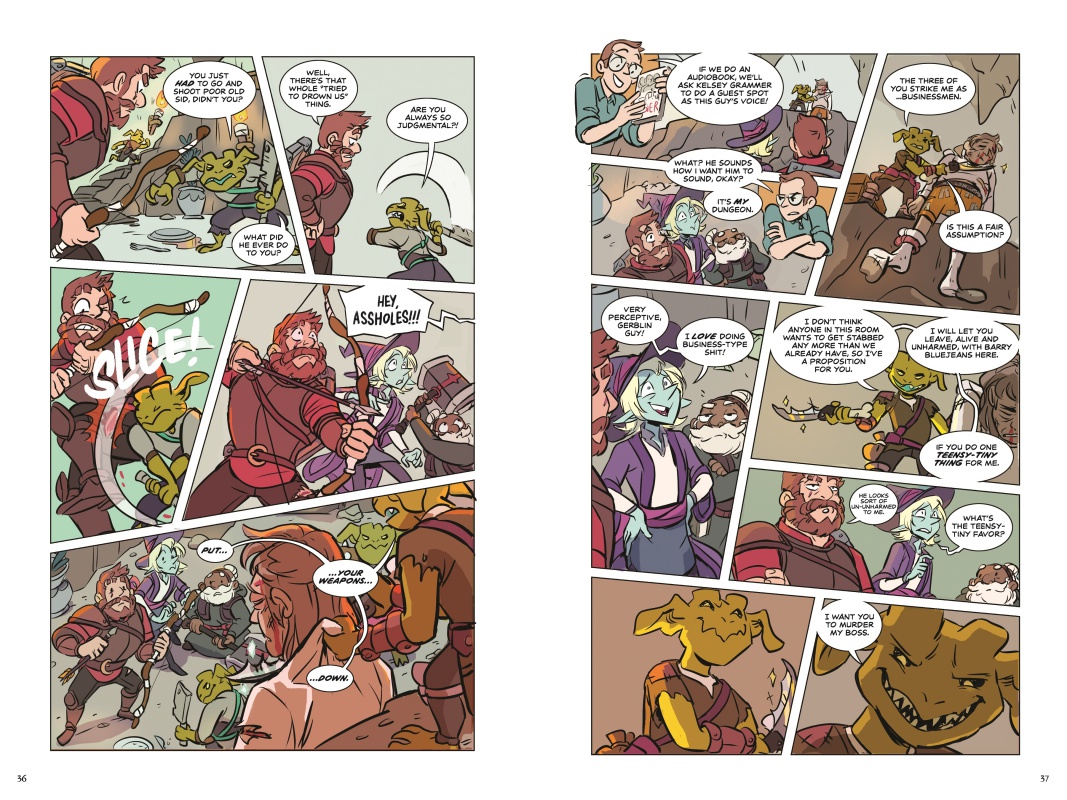 We had the pleasure of speaking to Clint and Travis McElroy and Carey Pietsch about their process of bringing Here There Be Gerblins to life.

“From early on, Carey has always stood out, [her art] being the perfect encapsulation of silly, but also grounded,” Travis says of Carey Pietsch’s art. Pietsch had been a fan and member of the Adventure Zone fandom before being approached to work on the project (this is the dream). “Adventure Zone is our take of telling a story and being funny, which is why we’ve always loved Carey’s art. She gets the humanity of the world we’ve created.”

“There was a lot of work that went into making the overall gameplan, because the story of the podcast is three guys playing D&D with their dad,” Clint explains. “However, the graphic novel is about the characters and the Dungeon Master. Where to start and how to start was a decision we put a lot of thought into. We had whole segments that we worked on and then said, ‘No, that’s not how we want to start.'” 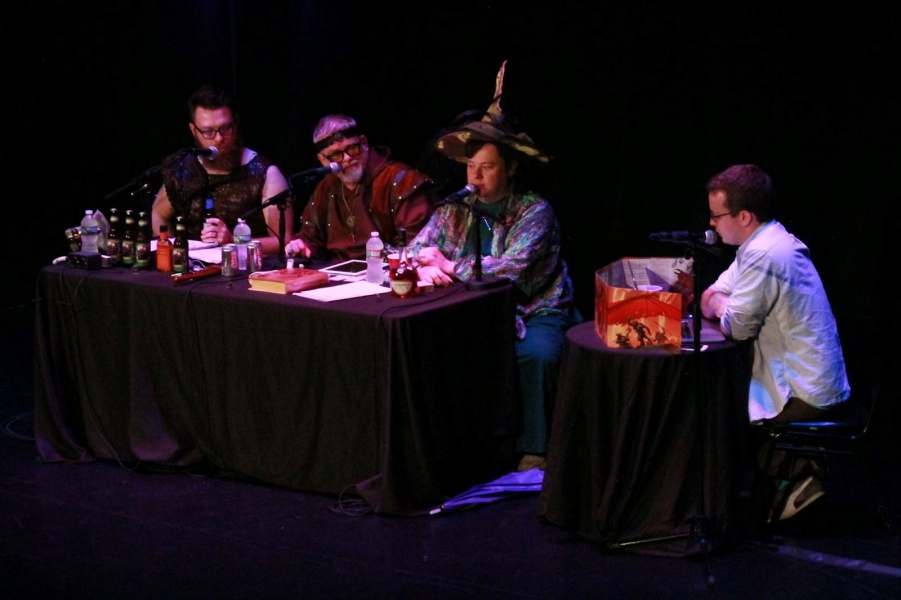 Between the McElroys, it was discussed whether they would be characters in the story themselves, how to integrate the Dungeon Master and what aspects of the series should be clarified—like what color was Magnus’ beard. Plus, there is the whole issue of how to do jokes in this new format.

“When we tell jokes in the podcast, I’m not thinking about the joke, the delivery sells it and it’s improv,” Travis explains. “Writing the jokes and writing it down, we don’t have the delivery or the energy of improv, so you can’t be lazy. We needed to polish it and make sure that body language and wording made it all come together. Especially when it came to meta-level jokes.”

“The fourth wall is very flexible in the book,” Clint laughs. “Delivery comes across as you get to know the character, which is because of the brilliance of Carey’s work. There were times where we thought we’d have to get rid of a joke and Carey would say, ‘Let me see if I can make it work’ and she made it work.”

When it came to editing things for the graphic novel, all the McElroys were involved in helping to make adjustments like, “How would Magnus say this but shorter?” The nearly seamless transition is really the result of great communication between the mediums.

To really hone in on the physical humor Pietsch ended up rereading a lot of action comedy comics and manga like Ranma to brush up on how to make fighting funny. “It’s a lot of goofs,” Pietsch says about the podcast, “but it’s also a lot of levels of plot that go into why a joke is funny. So then you have to unpack that into a panel layout, where people are standing on a page and what you can and can not see.”

“Griffin did such a strong job of describing a lot of those settings in the Balance podcast that we have a really wonderful foundation to build off of—we think about okay what does this magical key looks like or what does the Bureau of Balance look like,” Carey explains. “It was really more of a sense of not creating from something whole cloth, but working to adopt that tone into a visual setting. One thing of the many things that I really love about the show is the music Griffin does, and it’s a starting point for a lot of the tone.” 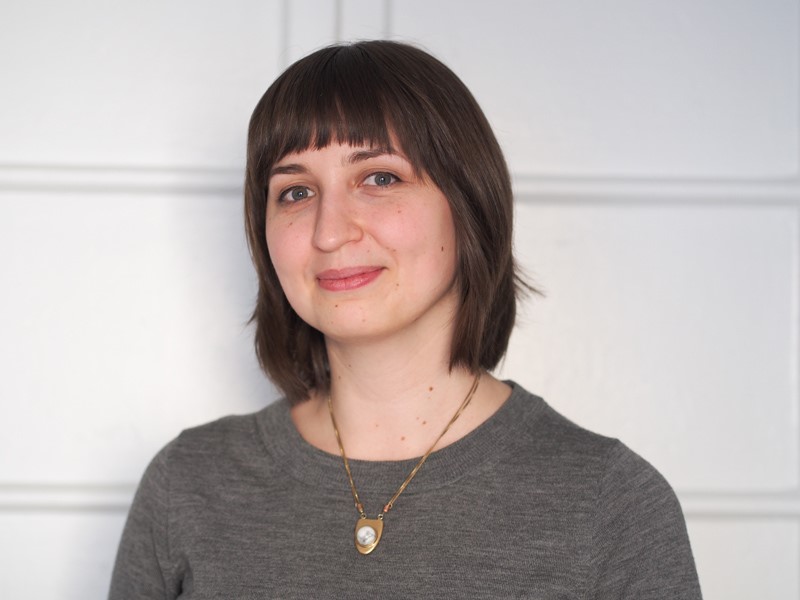 As a newcomer to The Adventure Zone, one of the things I grew to adore about the series was how inclusive it was. Takko was a gay character, Lup was Taako’s transgender twin sister, Killian is a lesbian crossbow-wielding orc with a badass girlfriend, and in the graphic novel, there are different sizes and skin-tones throughout.

I asked the McElroys how they went about creating this diverse world of Dungeons and Dragons called The Adventure Zone and how they maintained a healthy relationship with their fanbase.

“How do we tell a story that doesn’t just sounds like the same thing over and over again?” Travis explained. “In our current arc, I’m playing a character named Aubrey and I realized I was playing myself, but as a 20-something-year-old woman. It’s fun to play a person who is different than me in how the world reacts to them, but personality-wise exactly the same as me. Whenever someone says they don’t know how to write women, I say well just write a character and make that character a woman. That’s more fun that just playing a white male dude.”

“I’ve had to examine what are my privileges and what are my biases and what do I tend to default to draw and make a conscious effort to push back against that and be more thoughtful about actually drawing a cast of characters on the page that are a better reflection of life,” Carey explains. “I’m really grateful to my friends and colleagues have done the work of talking with me about that helping me about it in the future too.”

It also helps that their fans hold them to a high standard, which challenges them to do better.

“We are lucky to have fans who don’t write us off whenever we have a misstep, which I’m so grateful. There are characters in the third arc that when we ended up writing their stories that our fans came to us and said, ‘Hey this is pretty trope-y and the tropes aren’t great.'” Tarvis is open about the fact that they are still learning. “Not only were we able to correct it, the story became so much better because of it. It was so much more rewarding for us to do.”

Clint: “If there’s a trope we’re gonna stop it. When we first started a lot of the things we tried to do was to mess with the story, a lot of the time just to mess with [Griffin] we would make the least expected choice. I think that helped define those characters and that made it easier for us to say, ‘We aren’t going to do it this way.'”

“We are on like step three of step one thousand, ” Travis humbly says. “We don’t think we are perfect, or that ‘we are the good ones’, we still screw up. I never want us to stop listening or taking a second look. Always being open to feedback has worked well for us.”

The reward for that humility and thoughtfulness has been a fandom that loves this awesome podcast and who will, without a doubt, enjoy this dynamic graphic novel.

The Adventure Zone: Here There Be Gerblins comes out July 17th from First Second Books.