Terry Crews’ Accused Groper Is Back at Work 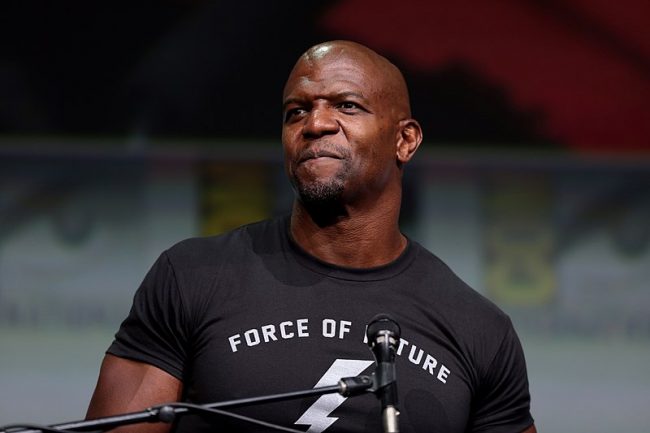 Adam Venit, a high-powered Hollywood agent, has returned from what was surely a nice extended vacation. Venit was “disciplined” in October with a month’s unpaid suspension after actor Terry Crews spoke out about having his genitals groped at a party.

This “discipline” is, quite frankly, bullshit. Venit is a longtime Hollywood power broker, with clients that include Adam Sandler, Vince Vaughn, and Steve Martin, and he is hardly going to be hard-up for some cash without a month’s salary. What this kind of “punishment” accomplishes in the face of harassment and assault is nothing.

In fact, I’d say that sending Venit into seclusion is more harmful than keeping him around (once his job was deemed safe), and making him be publically accountable for his actions. If I ran the William Morris Agency (WME) where Venit works, I’d have made Venit the centerpiece and the poster boy for a campaign against sexual harassment at work and everywhere else.

I’d have brought in experts to run workshops and projects on handling harassment, and how not to harass, and have Adam Venit be front and center at every single one. The agency has an august history and reputation to think about, but it’s unclear if any changes have been made internally save Venit’s temporary suspension.

In October, in the wake of Harvey Weinstein, Brooklyn 99‘s Terry Crews showed solidarity with the women sharing their tales of sexual harassment and assault. He did so in a brave and highly visible manner: by publically telling his own story on Twitter of having been brazenly groped by a Hollywood executive at a party.

Crews was one of the first famous men to open up in this way and it was an important and significant step towards putting our culture of violent sexual power dynamics under the microscope. Harassment and assault are about power, and they transcend gender, race, sexuality, age, class, religion—however you are defined doesn’t matter. We are all vulnerable. If Terry Crews, who is 240 lbs of solid muscle, could be subject to unwanted violations, anyone could. 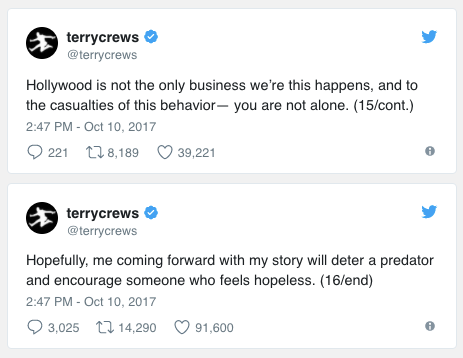 Crews had hoped that by relating what happened to him, he might “deter a predator and encourage someone who feels hopeless,” which was an incredibly noble sentiment. At the time, Crews did not name the executive who grouped him, but Venit’s identity was quickly unearthed in the media.

In the wake of Crews’ story, the WME agency sought to save face. According to The Hollywood Reporter, they “investigat[ed] to determine if it was an isolated event or indicative of a pattern. WME sources say the agency found the former to be the case.” Yeah, cool, cool, I’m sure their investigation was very thorough and any other possible victims of Venit’s weren’t scared to speak up in the least. WME had already botched looking into Crews’ claim when it happened, so forgive me if I don’t exactly have a lot of faith in them here:

At the time of the incident, Crews complained about Venit’s behavior to his agent, WME’s Brad Slater, but agency sources say that the matter was never taken up the ladder.

Even if we could somehow be assured that Venit’s groping of Crews was a one-off incident never to be repeated ever again, the fact of the matter remains that it happened, and this man now returns to a position of power and wealth without any seeming long-lasting ramifications. THR does note that Venit was demoted as WME’s head of the motion picture department, but again, that’s probably just a PR move. He didn’t even lose any of his A-list clients. Today, Venit apparently “made a tearful apology to staff at the agency’s morning meeting,” and then I suppose … that’s that?

Not every man or woman accused of harassment or assault needs to be banished forever into pariahtown. To me, this can worsen the problem rather than addressing it. By simply firing people, they are no longer held accountable for what they did; all that action does is remove them from circulation at one place, to no doubt quickly land at another.

Every case is different and should be assessed as such. I believe that people who work hard towards understanding their behavior and accounting for it should be given the chance to demonstrate that, in certain circumstances. But what does a one-month suspension for Adam Venit signify other than an extended vacation? Did he go to therapy? Join Harvey Weinstein in sex rehab? How is there any indication that this won’t happen again, if all Venit has done is cool his heels for a few weeks? What kind of message does it send when you can just bounce back to work with an apology at a morning meeting? And, most pressingly, where the hell is Adam Venit’s loud and very public apology to Terry Crews?

We need to address the racist elephant in the room: Terry Crews is a black man, and this leaves me to wonder just what Venit’s “discipline” would have been if his accuser was a famous white woman or man. If Adam Sandler or Steve Martin had shared a story of what they experienced after being forcibly groped by a WME executive, do you think Adam Venit would be back in his office today? Do you?

I’d like to introduce to the jury the statement made by our Marykate Jasper when we shared the news of Venit’s return in Mary Sue chat:

Fuuuucccccckkkkkkk this
obvi the dude who assaults a black man gets reinstated first, fuck u Hollywood

I’m not sure I can put it any more finely than that, but the last word here belongs to Terry Crews.

SOMEONE GOT A PASS https://t.co/yLPwpWGtT8